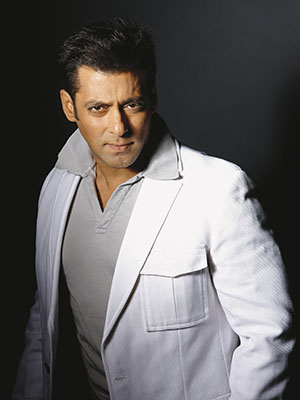 Saat Rasta, known earlier as the Jacob Circle, is the vortex that joins five different areas of Mumbai. On that junction lies New Shirin Talkies, a non-descript theatre. Normally, the traffic on Saat Rasta roundabout is messy, but a week before Eid in 2010, at least three roads leading up to it were completely blocked.

When one got close to the roundabout, nothing appeared out of the ordinary. Except that Salman Khan was staring out of a large poster of Wanted and there were people milling about the entrance creating the traffic bottleneck. Wanted was a two-year-old film. Why the queues?

So what? Isn’t this an old film?

A week later, when Dabangg released, it broke all weekend opening records, bettering the previous record of Aamir Khan’s 3 Idiots. Salman then delivered Ready and then Bodyguard—each grossed more than Rs 200 crore. In 2012, Salman aced the box office with the Eid release of Ek Tha Tiger, and in December 2012 delivered Dabangg 2, another smash hit. He is the star who has made masala films hip again.

No other actor in the last 30 years has done what Salman Khan has done. He has delivered six superhits in four years, grossing over Rs 850 crore. “Salman ke pagalo ki kami nahi hai. Aisi line lagti hai ki pucho mat (There’s no dearth of Salman fanatics. There are long queues for his films),” says Manoj Desai, the owner of Gaiety-Galaxy multiplex in Mumbai.

The closest parallel to Salman’s winning streak is Shah Rukh Khan’s magical run from 1993 to 1995 (Darr, Baazigar, Kabhi Haan Kabhi Naa and Dilwale Dulhaniya Le Jayenge (DDLJ)). It may sound blasphemous today but Salman is the underdog who is now the top dog of the box office. Till 2006, it was Shah Rukh who held all the aces. Shah Rukh was the Mr Dependable who in phases—1993 to 1995, 1998 to 2002 and 2003 to 2006—delivered Hindi cinema’s biggest hits. Salman was just erratic then. Notching a hit here and then delivering a multitude of non-consequential films. This is when he wasn’t getting on the wrong side of the law. He was accused of running over a pedestrian in 2002 and faced trial for killing a Chinkara in 2006.

The transformation of Salman is one the most notable turnaround stories of Indian business. Behind it lies a shift in the way he views his career, philanthropy and the counsel of some wise minds, most notably his father Salim Khan. There is only one thing he hasn’t changed. His cocky but lovable attitude.

DRAWING THE LINES
The drive to Surve Farms, where Salman is shooting a commercial, is almost two hours from Mumbai. Next to an old haveli is a flotilla of buses. Behind the buses and sitting below a makeshift canopy is Da Man—Salman Khan. “Which magazine did you say you were from?” he asks, looking away.

Forbes India. We are doing a list of top celebrities.
“On what basis? Who is the jury for this?”
There is no jury. This is based on earnings and fame.
“Who will tell you their true earnings? Fame…
It is an estimate based on four independent….
“Can I take this notepad and pen?”
Yes.

“Look, there are 100 guys on your list. Right? And you guys must be getting calls from people who want to be on that list.”

“…C’mon, you are Forbes. I know you are a famous magazine. People want to be on that list.”

“Ten thousand people want to be on that list. Many people need it. Except one,” says Salman, and writes -1 on the sheet of paper.
Except one? Who? “Salman Khan.”

THE RISE OF A STAR
Over the last 40 years, Hindi cinema has had two undisputed matinee idols. The first was Rajesh Khanna. The second is Amitabh Bachchan. The slot fell vacant in 1982, when Bachchan was injured while shooting for Coolie. Bachchan did have hits in 1984 (Sharabi), 1988 (Shahenshah) and 1991/1992 (Hum, Khuda Gawah), but he was never able to recapture his old glory.

The quest to fill the vacant throne began in 1988 when Aamir Khan scored with Qayamat Se Qayamt Tak. Two years later, Salman lit up the screens with Maine Pyaar Kiya. Even though they had a headstart, neither could become a surefire hit at the box office a la Bachchan or Khanna. That would happen only six years later.

In 1995, Shah Rukh Khan happened when he did DDLJ, one of the highest grossing Indian films of all times. Till 2003, it was Shah Rukh who reigned at the box office. It has to be said though that a lot of his success came from the overseas market, thanks to his  urbane looks and demeanour. “The NRIs and even the foreign audience absolutely love him,” says Boman Irani. If there is one thing that Shah Rukh could not manage, it was to become as big a draw as Bachchan or Khanna in the hinterlands. 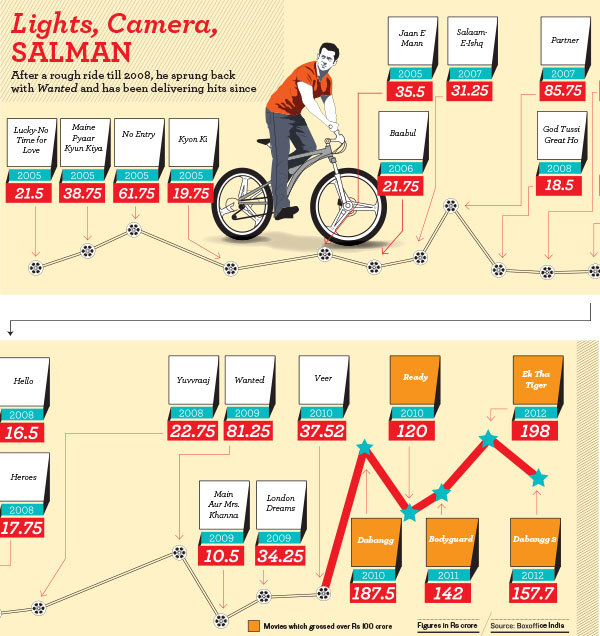 ALL WORK AND NO PLAY
It was then that Salman, who had been busy partying and doing some eminently forgettable films, decided to change his ways. He stopped his party-hard ways and improved his work ethics dramatically. It didn’t happen in a day. As his father Salim Khan says, it was only over a period of time that Salman understood that anything good that he wanted to do—charity for instance—would happen only if he was able to succeed as an actor. The first step would be to turn up for shoots on time and select the right films.

Earlier, he would do any film for any reason. He would do films because his friends needed financing for the project and a big star’s presence would help. “It is a business. Tum rahoge, toh yeh sab rahega [As long as you are there, all this will be there].  So that had to be explained to him that you should select good films. You can only help people...if you are there,” says Salim Khan.

Around 2002, Salman’s affair with Aishwarya Rai ended. Though he was linked to Katrina Kaif later, people close to him believe that for the last three to four years, Salman has been as single as he can be. The loss in emotional intensity in his personal life has been taken up by his focus on his career. “Till a few years ago, he gave a lot of importance to his personal life. It used to consume him at times. That took a slight backseat,” says Arbaaz Khan, his brother and the director of Dabangg 2. “I feel this is one of the reasons why his film selection has improved.”

But the bigger challenge was to differentiate himself. Aamir is the serious guy. Shah Rukh is the romantic guy. When you need a few bones broken, Ajay Devgn was the man. Salman put it all together. It is reminiscent of the way Bachchan in his heydays offered a bit of everything—romance, action, comedy. Similarly, there is a little bit of Salman-ness in all of his roles. He is cocky, arrogant, but funny too. “There was a bit of Salman in the character of Chulbul Pandey also. Just like how there was a bit of Salman even in Wanted,” says Arbaaz.

“Hero jab parivarik aur action dono mein kamyaab ho, woh perfect hero bola jata hai. Wahi uske saath hua hai [When a hero is successful in family as well as action roles, he is said to be a perfect hero. That’s how it has turned out for Salman Khan],” adds Manoj Desai. All the success has meant that Salman has been able to do what he really loves. Help those in need and scale up his Being Human initiative.

JOY OF GIVING
Being Human Foundation was Salman’s idea. The family has always been out to help people, but it was sporadic. In 2007, they decided that they should do it in a more organised way. In 2012, the foundation donated close to Rs 7.5 crore and, in terms of medicine and hospital expenses, helped 2,534 people. “Jab se hamne foundation kholi hai…ek self ka cheque nahi gaya hai, ek kisi aadmi ko cheque nahi diya hai, [since we started the foundation, no cheque has gone to us or to any individual…] every penny has gone to either the hospital or the doctor or for the medicines,” says Salim Khan.

All this has been made possible by making Being Human a lifestyle brand. In 2012, Being Human (licensed to Mandhana Industries, a Mumbai-based textile company) had a turnover of about Rs 60 crore. “It has worked so well as it is a combination of fashion, charity and celebrity. Two percent of our sales go to the Foundation,” says Manish Mandhana, managing director of Mandhana Industries.

The potential is huge. “Women literally bought small sizes of men’s T-shirts. Finally, we said we need to extend the product line. In March, we are launching both women and kids' wear,” adds Mandhana. Early this month, Being Human opened its flagship, standalone store on Linking Road at Bandra in Mumbai.

PARTING SHOT
Back at Surve Farms, Salman’s hospitality is in full flow. Food, sweets and green tea are in abundance. Every 10 minutes, he leaves for his shot and comes back to share his perspective on just about everything—art, body building, journalism and even the government. An hour-and-a-half later, the shoot is almost done. He changes into a Being Human T-shirt for a short endorsement message: “Puch rahe the na ki Being Human ke stores kab aur kaha kholenge...ab information mil gai hai toh dabaa ke khareedo.” [You were asking where will Being Human shops be set up? Now that you have the information, buy your hearts out.]

Direct and irreverent even while doing good. Some things about Salman Khan never change.

Show More
Get the latest stories, videos, and podcasts from Forbes India directly in your inbox every Saturday
Thank you for your comment, we value your opinion and the time you took to write to us!
Comments 22

Tweets by @forbesindia
Producers Who Scored at the Box Office
The Biggest, Brightest Celeb100 Stars