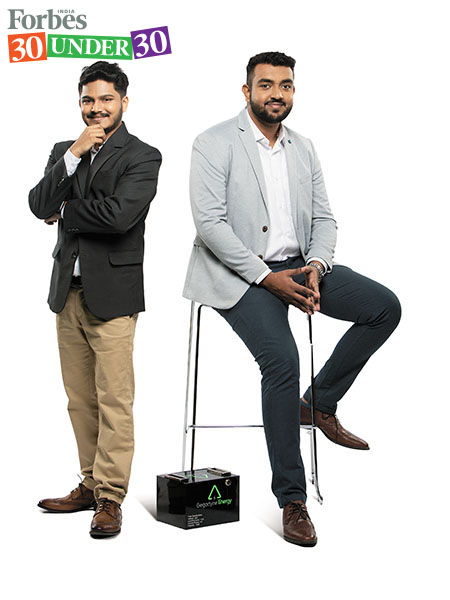 Gegadyne Energy was founded in 2015 by Jubin Varghese and Ameya Gadiwan, who have developed a proprietary battery technology that can charge from 0 to 100 percent in under 15 minutes.

The company uses non-lithium battery technology to power its batteries, based on carbon and derivate of carbon. With its proprietary multi-ion electrolyte, the battery is able to store a lot more energy than conventional methods allow. The company is working with multiple original equipment manufacturers globally and in India to sell its battery technology, battery management system, raw materials and analytical tools to customers.

“For mass adoption of electric vehicles, we need to overcome three major roadblocks—price of the batteries, range anxiety and overall charge time. Gegadyne Energy is aiming to leapfrog batteries to the next stage and thereby change the economics of electric vehicles and everything else associated with them now and into the future,” says Varghese.

Varghese and Gadiwan were batchmates at Narsee Monjee Engineering Institute and decided that electric vehicles were the future. The firm raised seed capital from Mumbai Angel Network in 2018 and is on the verge of closing a new round of fund raising.

Vikas Khemani, founder, Charnelion Capital, who invested in the company during the angel round, says, “They are both passionate about technology and are solving a big problem of power storage. They have met with success in the initial phase. The next stage is to grow it to commercial scale.”

He adds, “We are staying invested in them and the company is now raising a larger round of capital with a higher valuation than when we came in and it has large-scale potential to grow in this ecosystem.”

Tweets by @forbes_india
How to choose a Scooter?
30 Under 30: People to watch out for