Suresh Venkatachari saw the shift of computing power to the cloud long before it became a disruptive force. The fruit of foresight? His company 8K Miles is growing at a scorching pace 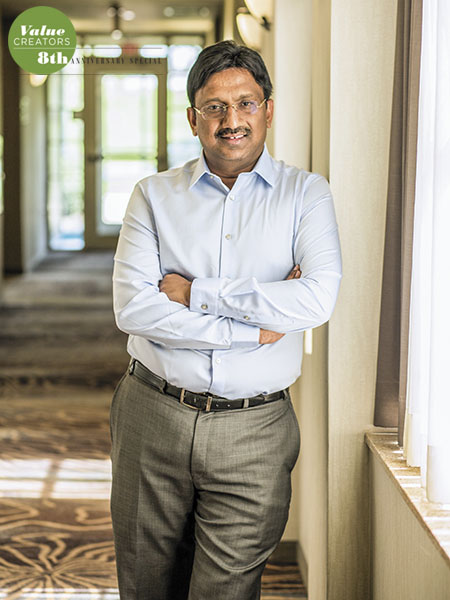 Looking ahead: Suresh Venkatachari, chairman and CEO, 8K Miles
In 2008, when US-based Suresh Venkatachari decided to incubate his venture 8K Miles at the Indian Institute of Management Bangalore (IIMB), cloud computing was an inconspicuous term.

Yet the engineer-turned-entrepreneur—then running the electronic and internet banking services company SolutionNET India—was so convinced of its potential that he decided to explore the sector, roping in existing business partners RS Ramani and Harish Ganesan into his new enterprise.

Cloud computing has grown rapidly, fed by demand from startups and large corporations that have grasped the economics of renting computing power—servers, mainframes or personal computers—instead of owning it.

Today, Suresh, chairman and CEO of 8K Miles Software Services Limited, is reaping the benefits of his foresight. For the fiscal year ended March 31, 2016, his company reported a consolidated revenue of Rs 272 crore and a profit of Rs 53.23 crore, registering a growth of 117 percent and 130.5 percent respectively over the previous fiscal.

The company has been on a high-octane growth trajectory, albeit on a small base, since FY2014, when it started adding big enterprise customers to its client list. That fiscal, 8K Miles garnered revenues of Rs 44.05 crore and a profit of Rs 7.42 crore, compared with Rs 26.28 crore and Rs 3.97 crore respectively, in FY2013. 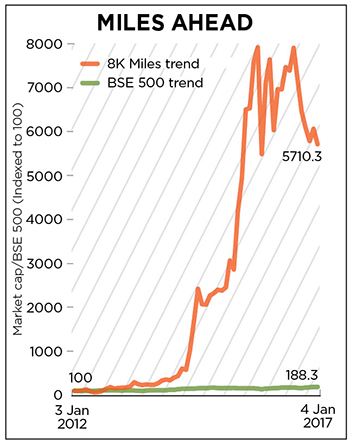 For Suresh, a 1988 graduate in electronics and instrumentation engineering from Annamalai University in Tamil Nadu, an academic background and work experience in technology proved instrumental in spotting the potential of the cloud.

Suresh started his career as a software engineer with Systime Software in Chennai, before shifting to Singapore in 1990 to work as a software project manager for Singapore Airlines. In November the following year, he began a five-year stint with Deutsche Bank in Singapore, developing the German bank’s electronic banking software (a precursor to today’s internet banking).

In 1996, he turned entrepreneur with his own electronic banking software services company SR Singapore, whose first customer was Deutsche Bank. The firm later started operations in India—through its subsidiary SolutionNET India set up in equal partnership with HDFC Bank—and the US, through a separate entity SolutionNet International. SolutionNET India later expanded to the Middle East.

“While working with large enterprises, mostly banks, I figured out that outsourcing [of software development and integration] had become big business. However, the small and medium businesses [SMBs] could not outsource due to budgetary constraints,” says the 49-year-old Suresh, recounting how the idea of 8K Miles germinated. (8,000 miles is roughly the earth’s diameter.)

In 2009, after one year of incubation at IIMB, the company set up headquarters at two locations, Chennai and New Jersey. Suresh, who had moved to the US in 2003, decided to lead the company’s operations there. In the same year, SolutionNET India, which had an impressive client list of 25 banks, was sold to the Chennai-based internet banking solutions firm Vayana Solutions for an undisclosed sum. (SolutionNET International was sold earlier in 2002 and so was SR Singapore.)

“We started when the cloud was not known to many people. Even Amazon had just started [Amazon Web Services] in 2006,” recalls Ramani, 52, the CFO of the company, who sits at 8K Miles’ office in Alwarpet, Chennai, where 150 of its 500-odd employees work.

Before cloud computing gained currency, huge investments in on-premise hardware infrastructure were a prerequisite for companies to run their enterprise software. Today, cloud computing firms like 8K Miles have cut down the need for such investments as the entire IT software infrastructure of a company can be hosted on the cloud—networks of remote data centres that are used for a host of services including data storage and processing. Yet, cloud computing has only gained prominence over the last three to four years as security and compliance related issues impeded its initial adoption. 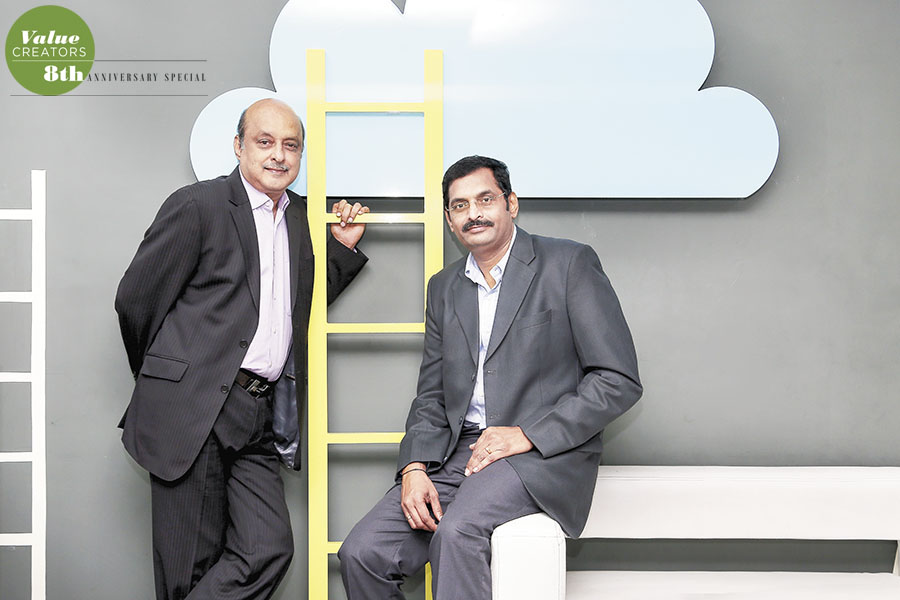 “Our company was born on the cloud with cloud expertise. We had a set of SMB customers who could not afford huge IT expenditures. We had to eradicate their capital expenditures and put them on an operating expenditure mode. For instance, a company’s expenditure of $200,000 on IT infrastructure can be halved if their software is set up on the cloud,” says Ramani, whose association with Suresh precedes 8K Miles. The two had met at a private function in 1996-97 in Dubai, where Ramani was a chartered account and Suresh was looking for someone to incorporate and head SolutionNET India’s Middle East operations.

“Suresh always foresees things… [he] thinks 10 years ahead and is an innovative person. Like with internet banking, he knew cloud was going to become big in the future and was passionate about it,” says Ramani.

And the cloud business is just taking off. A recent note from research firm Gartner estimates that the global cloud computing services market will reach $68.4 billion in 2020, almost three times its 2016 size of $23.3 billion. Traditional data centre outsourcing spends by companies will decline to $45.2 billion from $55.1 billion in the same period.

“ I would call ourselves enablers because the transformation journey to the cloud is not an easy one.

This also explains why the world’s technology giants have boarded the bandwagon. Microsoft Azure, Google Cloud and IBM’s cloud business are competing for a share of the market dominated by Amazon Web Services (AWS), which counts 8K Miles as a key channel partner. “Amazon is our role model. They built everything on a very innovative and self-service model,” says Suresh.

While AWS provides the wherewithal to host a client’s software infrastructure on the cloud, 8K Miles helps clients make the migration. The company also manages cloud-based enterprise software, besides providing data security solutions for its clients, which include Novartis, General Electric, Air Asia, Xerox, Intel, and Merck. Unlike AWS, 8K Miles does not own any data centres.

“AWS has all kinds of servers. What they give you are the raw machines, the CPU, storage and device connectivity. Now how does the client build on this? That’s where we come in. We move [clients’] existing data on to the cloud and secure it,” explains Suresh.

“I would call ourselves enablers because the transformation journey to the cloud is not an easy one. Especially in regulated industries like life sciences and health care where there is a tight control on compliance and security,” says Ravi Chandran, head of the India operations at 8K Miles.

Chandran, who joined the company about two years ago, has over three decades of experience in the IT industry, having worked for IBM and Ramco Systems. “In order to manage a customer’s IT infrastructure on the cloud, you need strong processes, [software] frameworks and tools, and lots of automation, which is what we do as part of our managed services business,” he adds.

At present, 70 percent of 8K Miles’ revenue comes from the cloud migration business and the rest is from managed services. Geographically, 80 percent of its business is from North America, with the Asia Pacific region accounting for the remaining.

“It was only in 2013-14 that we got a break by winning big enterprise customers,” says Ramani. That year also marked the beginning of 8K Miles’ acquisition spree. Between 2013 and 2015, the company acquired five firms—US-based FuGen Solutions, SERJ Solution, Mindprint, NexAge and Canada-based Cintel—for a total amount of $15 million.

These acquisitions helped 8K Miles build its competence and cloud capabilities in the life science and health care sectors, which account for six of 8K Miles’ top 10 clients. “We have made targeted strategic acquisitions that have helped bring domain knowledge into our team and provided a platform to expand our business. This has also made us a niche player,” says Chandran. “For us the sweet spot is in the regulated sectors where we have built our competencies.”

Given the disruption that cloud technology is creating, the old guard of India's IT sector too is eager to have a finger in the pie, and are following an acquisition strategy. In 2015, Infosys acquired Israel-based Panaya—a provider of cloud-based services for major global players such as Apple, Johnson & Johnson, and General Electric—for $200 million. Last year, Wipro acquired US-based cloud computing firm Appirio, which has clients such as Facebook, eBay, Home Depot, for $500 million.

As a result of acquiring large enterprise customers and focusing on the life science and health care space, 8K Miles has managed to raise its revenue and share price, attracting the attention of mutual fund investment firm DSP BlackRock. Sandeep Tandon, MD and CEO of securities and brokerage firm Quant Capital, holds a 6.01 percent stake in the company.

Suresh holds 55.8 percent stake in 8K Miles, which was first listed on the Bombay Stock Exchange in 2011 through a reverse merger with dormant Hyderabad-based company PM Strips Limited, and then got listed on the National Stock Exchange in 2014. (Dormant companies, also called shell companies, are often used as vehicles for various financial moves.)

“I don’t fundamentally like the venture capital model where they have a control over the business,” says Suresh, adding that a few investment bankers [who he doesn’t wish to name] advised him to go in for a reverse merger with a shell company.

Was it a right decision? “No. Absolutely not,” he says. “It took us about two to three years to clean up the image of that company. We should have waited for around two to three years and gone in for a new IPO or could have listed ourselves in the US markets where we would have got a much better valuation.”

A US listing for 8K Miles is something Suresh does not rule out. At an “appropriate time” he says either an American Depositary Receipt issue or a direct listing could be considered. “Currently we are growing significantly and gaining at least two large customers each quarter. Once our revenue excedes $100 million it would enhance our overall value.”

If 8K Miles gets listed in the US, it would be the second company that Suresh would take public on the American bourses, after SolutionNet International’s 1999 Nasdaq listing.

In the India-listed 8K Miles, there are no major institutional investors apart from DSP BlackRock Microcap Fund, which holds a 2.23 percent stake.

In fact, 8K Miles came into the limelight when DSP BlackRock bought over 3 lakh shares (approximately 3 percent stake) of the company in the open market at Rs 175 per share, in August 2014. Since then, the company’s shares have tripled to Rs 564.45 apiece as on April 24, 2017.

It remains to be seen, however, if the share price can maintain its momentum. The stock is already overpriced at a P/E multiple of 21 times, higher than the IT industry’s average of 18 times.

“The company has come a long way in a short time,” says a stock market analyst. “Now we need to see how it goes from here.”

(With inputs from Pravin Palande)

Tweets by @forbes_india
Returns on rice: The making of India's biggest basmati exporter
Chumbak's Shubhra Chadda cashed in on India's love for the quirky