The auspiciousness of number 9

Considered lucky, it plays a key role in the decisions of many 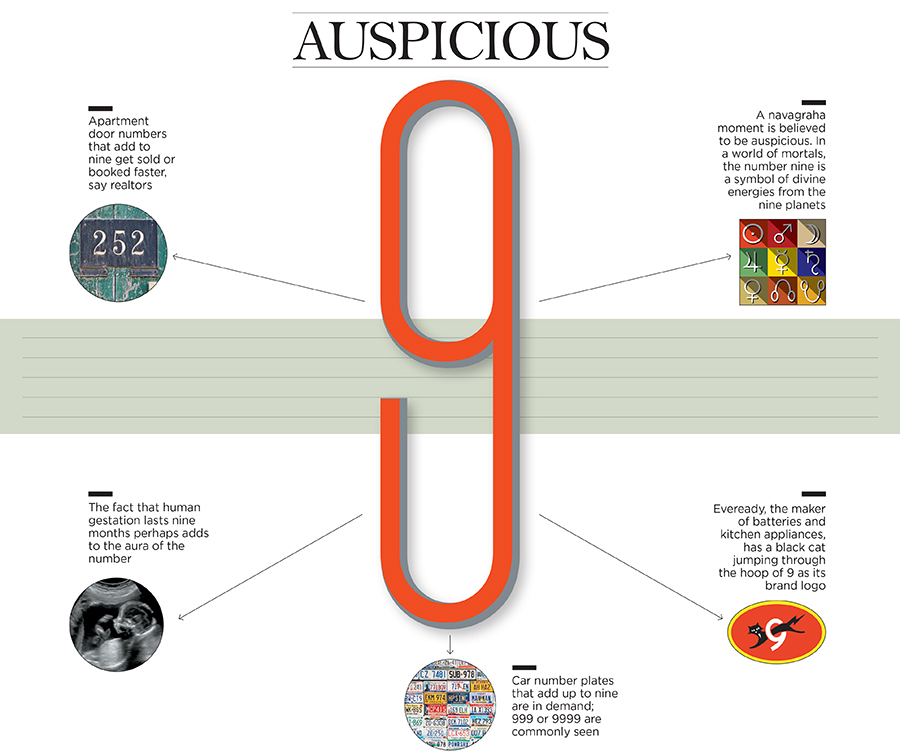 Image: Door Number, Usg, Number Plates: Shutterstock; Navgraha Illustration: Chaitanya Dinesh Surpur
In October 2016, Dubai-based realtor and chairman of RSG Group of Companies, Balvinder Sahni, also known as Abu Saba, forked out 33 million dirhams (₹60 crore) for a special vehicle number plate that was auctioned by the Dubai Roads and Transport Authority. Reason: The special number plate, D5, adds up to nine [D(4) + 5 = 9], which Sahni considers auspicious. He is not the only one to think like this.

For many Indians, the number nine plays an important role in their lives, especially while buying property and jewellery as well as registering vehicles. As per Hindu astrology, the number is ruled by the planet Mars, which is associated with power, energy and movement. “It is symbolic of continuity,” says D Sivakumar Nayanar, founder, Institute of Integrated Positive Astrology, in Bengaluru, adding that the number also signifies the nine planets (navagraha) that influence human life. “When energies are received from all the nine planets, all kinds of benefits are received by an individual.”

“A navagraha moment is an auspicious and lucky moment for sure,” says Harish Bijoor, brand expert and founder of Harish Bijoor Consults. “And nine is certainly about life. It’s all about the thought and myth that a cat has nine lives. And that means longevity.” One brand, he adds, that has used the concept well in India is Eveready. But more on that later.

About a year ago, Farook Mahmood, chairman and man aging director of Bengaluru-based brokerage and property developers Silverline Group and president of the World Council of Brokers (FIABCI), was faced with a navagraha moment. His client was unwilling to buy an apartment as its total purchase value—in the range of ₹8-9 crore—did not add up to nine. “We nearly lost the transaction because of this issue. We had to explain the issue to the property developer and finally they rounded off the price to a figure that totalled nine.” While Mahmood personally does not believe in numerology, he says, “This belief in the number nine is something extremely personal for some individuals, and they get upset if you try to fool around with their sentiments.”

M Murali, managing director, Shriram Properties, the property development arm of the `90,000-crore financial giant Shriram Group, echoes Mahmood’s view. “The number nine definitely has a special advantage. Apartments on the ninth floor, and, more importantly, apartment numbers that add up to nine get sold or booked faster,” he says, adding that such apartments carry a price premium of 3 to 4 percent. “If you go to Andhra Pradesh and Telangana, not only politicians but also prominent businessmen have car number plates that add up to nine; 9999 or 999 are almost common car number plates,” says Murali. “It’s an emotional belief, just as one believes in Ganesha or Jesus.”

So, has the number nine been auspicious for Kolkata-based Eveready Industries India? The maker of batteries and kitchen appliances has as its brand logo a black cat jumping through the hoop of the digit nine.

Amritanshu Khaitan, managing director, Eveready Industries India, laughs heartily at the question. “I don’t know about auspiciousness, but the brand and the logo is what this company stands for, and it has survived 113 years. We would be among a few companies that are alive, kicking and raring to go at 113.” But he can’t resist a quip: “I suppose the luck factor is there for the brand to be alive and be consumed by over 700 million Indians.”

Perhaps the fact that human gestation lasts nine months adds to the aura of the number.