Book Review: Js & The Times of My Life 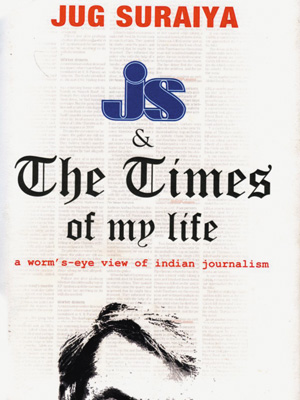 There are two terrible things about Jug Suraiya’s cleverly-named memoir. One is the — sigh — clever name, with the word’s ‘js’ and ‘The Times’ set in the typefaces of the logos of the long-departed and still lamented JS (alias The Junior Statesman), and the still-thriving Times of India, just in case you didn’t get it. The other is the ghastly cover design. Thankfully, everything beyond these is a delight.

I was born too late to have read JS, but early enough to have known many people who did, and to have wondered what it must have been like to be part of it. The TOI, however, was very much a part of my formative years, so Suraiya’s byline is a familiar one, indeed one that has, with others like Behram “Busybee” Contractor, played some part in me seeking a career with bylines of my own. In a country which finds buffoonery, mimicry and The Indian Laughter Challenge funny, Suraiya (like Contractor was, though in a very different way), is that rarity, a wise, gentle, observer, and a genuinely funny writer with a light, self-deprecatory touch.

js & The Times tells the story of Suraiya’s career; along the way, without quite seeming to want to, he also tells the story of a changing India through the two publications, from the heady days of ‘inventing the Indian teenager’, as someone said JS had, to the transformation of the TOI into the unabashed advertising vehicle it is today. The JS chapters star the legendary Desmond Doig, and feature, in guest spots, M.J. Akbar (in shorts, with ‘an aspiring moustache’ and a short story written in a school exercise book), Shashi Tharoor (also in shorts, but in a cocktail party, at age 12, quizzing Suraiya about the Jungian unconscious), Mother Teresa, Dev Anand, the Emergency, and of course, always there, his wife ‘Bunny, who needs no introduction.’ (She also gets a chapter of her own, a love story, really, told in 10 pages, and flits in and out of the rest of the book.)

Then, after the JS closure, and a little about his years in The Statesman, the book moves with him to Delhi and the TOI, then in its ‘sexy-centennial’ year. We see the paper move from its last ‘thunderer’, another legend, Girilal Jain, through Dileep Padgaonkar, Gautam Adhikari, and other famous bylines, with, always, the quiet presence of Samir Jain in the background. Suraiya lets you see the rationale behind the dumbing-down of the great paper, and, more credit to his charming prose, almost gets you to buy into it.

Suraiya’s introduction says, “Don’t try reading it at one sitting. Treat it as you would an off-the-beaten track, slightly seedy and decidedly unfashionable bar or café you occasionally go to, to listen to the yarns of the guy sitting in the corner who seems to have been there since anyone can remember and is given to waylaying strangers and telling them stories for the price of a drink, or a cup of coffee. You wouldn’t want to make an evening of it. But an odd half-hour or so, every now and then when you have nothing to do, might prove diverting.”

Bang on. Except that the guy in the corner is a witty raconteur, and if I ever meet him, he has a few gallons of whatever he’s drinking owing to him.

js & The Times of my life: A worm’s-eye view of Indian Journalism
By: Jug Suraiya
Publisher: Tranquebar
Price: Rs. 495; Pages: 350