Boardroom to courtroom: The argument continues

Despite Cyrus Mistry's resignation from the boards of Tata group companies, a spate of legal cases is likely to make the Tata-Mistry battle a protracted one 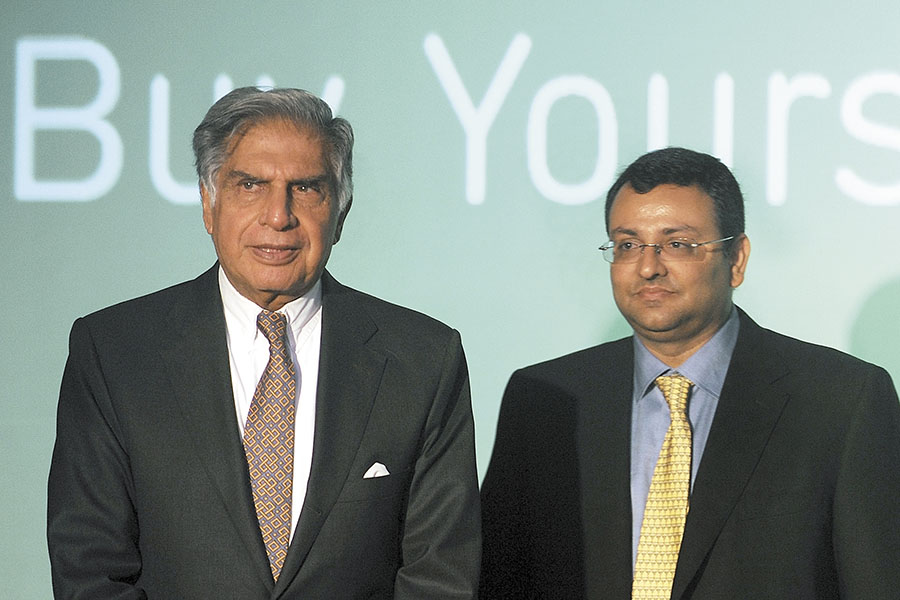 Over two months after the feud between Ratan Tata (left) and Cyrus Mistry became public, the battle still rages on. Both sides justify their actions on the grounds that they are to protect the group’s legacy
Image: Punit Paranjpe


The sixth floor of Fountain Telecom’s building No.1 in Mumbai’s Fort area, which houses the Mumbai bench of the National Company Law Tribunal (NCLT), is usually sparsely inhabited. Lawsuits involving corporate entities do not attract much attention unless there are big names involved, as was the case on December 22.

At around 10:30 am on that Thursday morning, the atmosphere in NCLT’s courtroom-1 was charged with anticipation about what would unfold over the next few hours. The six-month-old institution, set up under Section 408 of the Companies Act, 2013, was to begin hearing the most high-profile case brought before it in its short history—Cyrus Investments and Sterling Investment Corporation versus Tata Sons, Tata Trusts, their respective directors and trustees, among them, the 79-year-old Ratan Naval Tata, one of India’s best-known business icons.

Cyrus Investments and Sterling Investment are investment vehicles of construction major Shapoorji Pallonji (SP) Group, through which the business house and its promoters, the Mistry family, hold 18.4 percent of Tata Sons’ shares.

SP Group patriarch Pallonji Mistry’s son, Cyrus, was chairman of Tata Sons till his unceremonious sacking on October 24, 2016. Much has been written about what happened on October 24 and thereafter. To summarise, an irreconcilable trust deficit grew between the two sides, leading to a complete breakdown in ties.

Over two months after the feud first broke out, the battle still rages on—just that the boardroom drama has now reached the courtrooms. Uncertainty still looms large over the eventual outcome of multiple court cases filed by Mistry and Bombay Dyeing chairman Nusli Wadia, another key figure in this corporate battle.

During the course of the NCLT hearing, senior counsel Aryama Sundaram, arguing on behalf of the petitioners, reiterated many of Mistry’s allegations against his former employer and predecessor Ratan Tata. These also form part of the 300-page petition filed before the tribunal. These allegations include oppression of smaller shareholders such as himself, breakdown of governance leading to poor management decisions, undue interference by the Tata Trusts (which own 66 percent of Tata Sons) in the operations of group operating companies (where Tata Sons is the largest promoter shareholder) and lax corporate governance manifesting through cases such as the alleged fraud at AirAsia India.

Tata Sons’ counter allegations against Mistry include attempts to dismantle the conglomerate structure of the group, concentrate power in his own hands and diminish the relevance of the philanthropic trusts that own a majority stake in Tata Sons and are dependent on dividend income from the latter to fund their charitable social work. Tata Sons’ counsel Abhishek Manu Singhvi stated that the respondents didn’t find the petition maintainable vis-à-vis Section 241 and 242 of the Companies Act, under the provisions of which the Mistry camp had filed its suit. This is the point with which Singhvi is expected to begin his arguments when the tribunal reconvenes on January 31, 2017, to hear the respondents’ defense. February 1 has been set as the date for final hearing when the petitioners will conclude their arguments.

But some of the observations made by tribunal judge BSV Prakash Kumar during the proceedings are of particular significance. His interjections during Sundaram’s opening arguments were characterised by multiple demands for hard evidence against the respondents. And this may well be the biggest challenge that the Mistry camp will have to face. Even if it genuinely believes that it has been wronged, proving these wrongdoings through what the court perceives to be material evidence is another matter.

Mistry’s petition was something that Tata observers were anticipating, especially after he resigned from the operating companies without facing the shareholders’ vote.

Till the second week of December all eyes were on the impending extraordinary general meetings (EGMs) of the operating companies where the fate of Mistry’s directorship and chairmanship of various group operating companies was to be decided upon through a shareholders’ vote. Not only Mistry, even Wadia—an independent director on the boards of Tata Steel, Tata Motors and Tata Chemicals—faced resolutions seeking his eviction from these companies.

But apart from Ratan Tata’s brief statement at the Tata Chemicals EGM where he said he was “pained” at the allegations hurled at him and called it a definite attempt to damage his reputation, the EGMs proved to be damp squibs since Mistry had decided to resign from these companies on the evening of December 19.

Anil Singhvi, chairman of Ican Investment Advisors and founder and director of proxy advisory firm Institutional Investor Advisory Services (IiAS), feels that Mistry’s ploy to move court after a considerable period of time elapsed since his ouster as Tata Sons chairman was a well-calculated move on his part, rather than an afterthought. “He [Mistry] can say that he waited for two months for Tata Sons to provide cogent reasons for his ouster and that he wasn’t satisfied with the response offered. He can therefore claim to be aggrieved and in a position to seek legal relief,” says Singhvi. “Let’s not forget he is also the son-in-law of Iqbal Chagla [one of India’s top corporate lawyers]. So they would have clearly figured out the legal angles.”

After all, the NCLT case filed by the SP Group isn’t the only legal challenge facing the House of Tata. There are also a couple of civil and criminal defamation suits filed by Wadia, in one of which the 72-year-old Bombay Dyeing chairman has claimed damages to the tune of Rs 3,000 crore.

The court cases didn’t come as a real surprise to the Tata camp either. “Some of the statements that Cyrus had made ahead of the petition being filed indicated clearly that he was contemplating legal action,” says VR Mehta, a trustee of one of the two major Tata Trusts, the Sir Dorabji Tata Trust. “But I don’t know what he is trying to achieve. This could lead to destruction of shareholders’ wealth.”

The opinion of the group’s institutional investors, as manifest in the voting pattern at the EGMs, also appeared divided, though the eventual outcome was as per Tata Sons’ expectations.

At Tata Motors, for instance, only half of the votes cast by institutional shareowners were in favour of Wadia’s removal, while the other half voted against it. The resolution to remove Wadia garnered 71.2 percent votes totally, and was carried since such resolutions are ordinary in nature and only need a simple majority to be approved.

“For long, institutional investors have been voting with their feet. But they have realised that that can’t go on anymore,” says Navneet Munot, chief investment officer of SBI Mutual Fund. “Fund houses are beginning to engage proactively with the management of companies and doing their bit to ensure proper governance, rather than taking reactive steps such as selling the stock when things go wrong.”

Another senior executive of a large mutual fund that has substantial exposure across Tata group firms told Forbes India, on condition of anonymity, that his fund house had voted for the proposals to remove Mistry and Wadia, but that wasn’t necessarily a referendum on the performance of these directors nor an endorsement of Tata Sons’ assessment of them.

“We voted to remove Mistry since we felt that after his removal as Tata Sons chairman, it would be untenable for him to continue as chairman and non-independent director of other operating firms,” this person said. “That shouldn’t be read as an endorsement of Mistry’s removal from Tata Sons, but we wanted to give the promoters a chance to wipe the slate clean and start afresh.”

This senior executive also said that the fund house was in favour of Wadia staying on as an independent director on the boards of Tata group companies since he was “a good counter-voice”. But Wadia’s combative stance led the fund house to vote against him, since “it wasn’t possible for him to remain a director and yet ensure smooth functioning of the board”.

But voting along with Tata Sons on the resolutions proposed by them isn’t the same as accepting the developments that have come to light at the 149-year-old business house, many of which deal with aspects of good corporate governance.

“The entire episode has raised some burning questions and there are definitely issues that need to be looked into,” says Arun Kejriwal, an independent stock market analyst and director of Kejriwal Research and Investment Services. “In fact, there are questions with respect to the very way in which corporate India functions that need to be addressed.”

Even the fund house executive confirmed that now that the EGMs are over, his company would be asking for detailed explanations from the management of the Tata group companies pertaining to the issues raised by both Mistry and Wadia. “We will also seek clarity on the terms of reference governing the relationship between Tata Sons, Tata Trusts and the operating companies.”

That this saga is far from over is evident from the fact that even as this story was being written, Tata Sons had slapped a legal notice on Mistry claiming breach of trust for sharing confidential and sensitive information—that he had access to as a Tata Sons director—with his family-owned firms.

Whatever future steps the Tata and Mistry camps take, the interests of the millions of small shareholders of the Tata group companies have to be considered paramount, since both sides have sought to justify their actions on the grounds that they are to protect the group’s legacy and secure its future. But as Singhvi sums up: “When elephants fight, it is the grass that suffers.”