Call it the Fukushima effect or a political mishap, mass protests have stalled the Jaitapur plant in Maharashtra, and now Kudankulam in Tamil Nadu

By John B Ritch 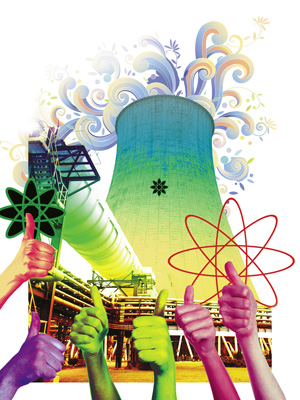 India is experiencing, for the first time, what many other countries have experienced for years — a demonstration of how easy it is for anti-nuclear activists to rouse public opinion to fever pitch by playing on the mysteries of the atom and the nature of radiation. Nothing has actually occurred in India to justify such public concern. But Fukushima has created just enough confusion for agitators to persuade people in at least this one locality [Kudankulam] that nuclear power poses a unique and enormous threat to their health and environment. This kind of misperception is wholly out of proportion to reality, and must be challenged because those who are propagating it are actually undermining the public interest.

The only answer is education. Nuclear professionals know the benefits of nuclear technology and how strictly it is regulated, and they need to bear the burden of translating their knowledge into persuasive public explanation. This kind of education needs to be broad-based, but extra attention should be paid to politicians and journalists. People in both vocations are often ill-informed about nuclear technology, and this ignorance, if given a public platform, can have a large multiplier effect.

Facts favour nuclear power as a technology that is immensely friendly to human health and the planetary environment. And its record of safe operations, both in India and around the world, is a remarkable achievement that needs to be much more widely understood. People often believe that Chernobyl is the worst example in a long string of “nuclear disasters”. But in fact Chernobyl was unique in causing several dozen fatalities in a reactor of a type that will never be built again. People need to be told that we have accumulated 15,000 ‘reactor-years’ of experience and that, except for Chernobyl, there has never been a single radiation fatality from the production of nuclear power. And this includes Fukushima. The public needs to hear these facts — in India and every other major nation — because their energy policies collectively will have a profound impact on the entire global environment.

In defending nuclear power, India’s leaders can take heart from the fact that in very few countries have anti-nuclear activists succeeded. Germany is a dramatic exception. But anti-nuclearism has not succeeded in America, France, Britain, South Africa, Brazil, Russia, South Korea, Sweden, or Canada. Nor do I believe it will prevail in Japan.

Britain is a good case in point, which I happen to have witnessed because World Nuclear Association (WNA) is headquartered in London. Ten years ago, anti-nuclearism in the UK had a full grip on the Labour government. But over the past decade, the ongoing debate about how Britain can fulfil its need for plentiful and clean energy has brought reality into focus, and today both of Britain’s leading parties are nearly unanimous in favour of nuclear power. This consensus is now rooted in broad understanding, and because of that it easily withstood the media frenzy over Fukushima.

Sweden offers another good example. Twenty years ago, anti-nuclearism gained a hold on Swedish opinion and produced a national policy to phase-out nuclear power. The question of how to do this created a prolonged debate, and — lo and behold — the force of facts gradually produced a complete reversal of opinion. Now, Sweden has a strong base of public support favouring nuclear power. Even more interesting, two Swedish communities recently ended up competing for the right to host Sweden’s long-term nuclear waste repository. People in those two communities [have come] to understand that hosting a waste facility would be safe, beneficial to the country, and economically valuable to their locality.

That kind of public understanding must now be built in India. Up until now, India’s citizens have been generally proud of India’s nuclear advancement, both in weaponry and in power production, and India hasn’t had much experience with democratic debate over nuclear issues. But now that debate has begun, and those who support nuclear power must step forward to engage with full focus and dedication.

In the past, there was little context in which to engage in educational efforts. Now that context has been created by a localised but surprisingly strong upsurge in opposition to nuclear power in Kudankulam, and the fight must now be joined. No one can predict how the politics surrounding the Kudankulam reactor will evolve. But we can say that the main hope for a rational outcome depends on those who are willing and able to bring sound nuclear knowledge to the public debate.

One misperception that needs to be cured is that governments can’t be trusted to tell the truth about nuclear power. There have been a lot of loose allegations about the Japanese government being too cosy with the industry and then lying during the Fukushima accident. I don’t accept this. I believe that, by and large, the Japanese government did its best to keep the public informed about Fukushima, and there is still reason to believe that there will not be a single radiation fatality, or even a case of radiation sickness, resulting from Fukushima. The government erred on the side of radiation safety, even at the expense of extensive harm to the continuity of lives and communities. Such a policy has a large unquantified cost by creating a worldwide perception that something quite horrible has happened even though the health of no individual has been harmed.

Some of this burden of perception now falls on India, requiring that India’s government experts and its emerging nuclear industry must undertake a serious strategic effort to see that the relevant issues are fully and publicly ventilated. There have been cases in other countries, notably Austria and the US, where near-complete reactors have been halted by public opinion. These episodes are strange footnotes in the history of nuclear power and public perception. There’s no magical cure — India’s nuclear professionals have educational work to do to see that India doesn’t join this list.

John B Ritch is the director general of World Nuclear Association and a former US ambassador to UN organizations in Vienna, including the International Atomic Energy Agency and the Comprehensive Test Ban Treaty Organization.