Zensar Technologies: On the digital highway

Zensar, given its relatively small size, is at an advantage as IT firms adapt to a new wave of changes. Aiding the tech firm's reboot is its aggressive CEO and a PE investor 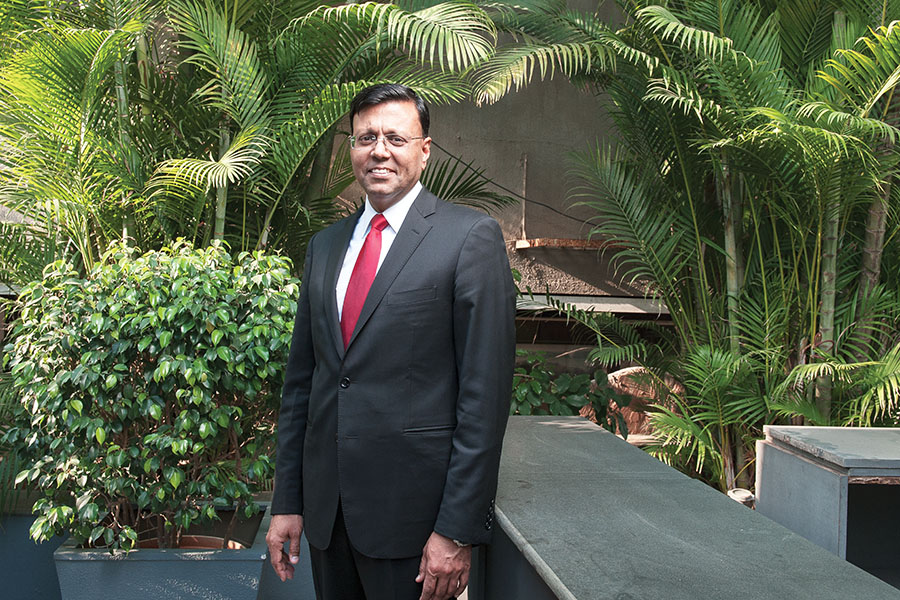 Sandeep Kishore, CEO and MD, Zensar Technologies, is promoting an aggressive sales instinct at the IT firm
Image: Mexy Xavier

“Zensar’s story was very much like the India story of the past; it didn’t do anything spectacular. It was a steady ship and a cosy house,” says Goenka, 59, who helms a $3 billion-business group.

Despite five decades of business (including in previous avatars), Zensar has not emerged from the mid-sized ranks. It closed FY16 with a turnover of $450 million. In comparison, Infosys, founded in 1981, had a turnover of $9.5 billion that year.

“[Being a mid-tier firm] we were at a big disadvantage; for the big IT deals, we weren’t even invited. So the concern was: Where will future growth come from?” explains Goenka. “We urgently felt the need for introducing some kind of disruptive growth strategy.”

Until about a year ago, the strategy contemplated was a big-ticket acquisition. But the rapid evolution of IT forced Goenka to rethink. The Indian IT industry thrived for decades by offering a labour arbitrage to overseas clients through outsourced services. Today, it is a foregone conclusion that future upsides from such a model are limited. Digital is the buzzword that has come to define the new wave of technology, comprising verticals such as automation, Artificial Intelligence, Internet of Things (IoT) and cloud computing, and every IT firm worth its code is trying to recalibrate its legacy systems.

In the new scheme of things, Zensar’s mid-size could be an advantage. “Its lack of success in the previous era of services has given Zensar a leg-up as it has a much smaller and more manageable organisation to transform,” says Peter Bendor-Samuel, founder and CEO of Everest Group, a US-based management consulting and research firm. “Additionally, it does not have the large legacy contracts of the big Indian [IT] firms and so is finding it a little easier to convince clients that it is not about the same old labour arbitrage.” 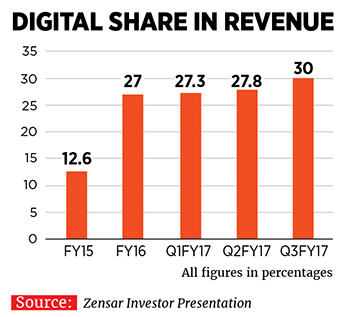 Consequently, instead of chasing a big-ticket acquisition, the new mantra for Zensar is to reorient the company towards becoming a digital-first and sales-focussed organisation under a new leadership, leveraging inorganic growth wherever required.

In this endeavour, RPG has found a like-minded partner in private equity (PE) firm Apax Partners, which acquired a 23.2 percent stake in Zensar in October 2015 for Rs 860 crore and a trusted lieutenant in Sandeep Kishore, who came on board as Zensar’s CEO and managing director in January 2016.

Kishore, 51, based in San Jose, California, took over the reins from Ganesh Natarajan, who had led Zensar as its vice chairman and CEO for 15 years.

Under Kishore’s leadership, Zensar has developed a suite of mobile applications to digitise all business processes—from measuring work and productivity to real-time tracking of sales. One of the apps, ZenVerse, a platform where any employee can interact with Kishore directly is something the Zensar chief is particularly proud of. “It is about feeling the pulse of the organisation, so that we can improve processes and systems,” says Kishore, who personally responds to each message.

The idea is to showcase Zensar’s digital strength to lure customers into the new-age services that it is developing. These include digital capabilities across service stacks such as customer experience and user interface, cloud computing, big data and analytics, digital marketing services, digital commerce, cyber security and IoT.

As much as 30 percent of Zensar’s revenue comes from its digital offerings—one of the highest proportions in the industry.

Clients appear to like what they see at Zensar. Ravi Chengalaryan, head of the group shared application portfolio at South Africa’s Liberty Group, says, “Zensar is driving the change by being the change and going digital before selling digital.”

Yet, Zensar is conscious that not all the digital capabilities it needs are available in-house. To bridge the gap, it has acquired two companies in the last five months, and more are likely to follow. In November 2016, it snapped up Foolproof, a UK-based design company that focuses on user interface and experience design; and in March this year, it acquired Bengaluru-based Keystone Logic Solutions, an omnichannel and digital supply chain solutions firm with operations in the US. 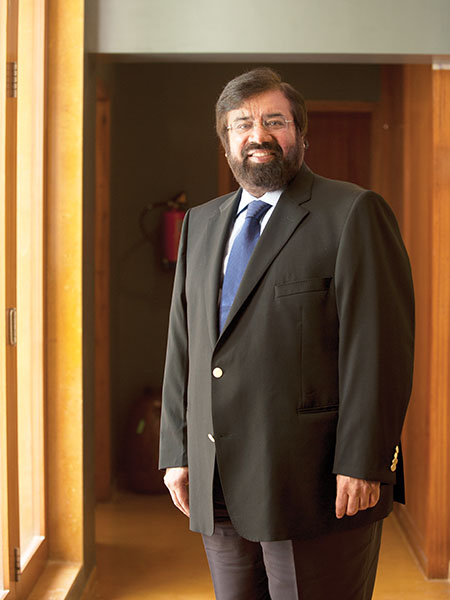 Kishore says Zensar has identified 12 key areas in which it will pursue future acquisitions. “We call these ‘tuck-in’ acquisitions, with the valuation of each ranging between $25 million and $75 million. We have $50 million in cash and can easily raise debt if needed to fund the purchases,” he says.

Shashank Singh, partner and head of the India office at Apax Partners, compares Zensar’s acquisition strategy to Accenture. “It [Accenture] built a $8.5 billion digital practice from nothing in just four years. It came from around 60 M&A deals, wherein small digital companies were acquired and left to pursue their own growth paths. The acquired companies benefited by gaining access to Accenture’s formidable client base.”

To complement the digital transition, Kishore has swiftly gone about making changes within the organisation. Foremost among them is the introduction of an aggressive sales instinct. Zensar has always been a “phenomenal delivery-led organisation”, says Kishore. But the company’s delivery excellence also bred complacency when it came to going out and getting new businesses.

“We would wait for the customer to give us an order. We weren’t going to them with new value propositions, saying these are the latest trends,” says Kishore. “Frankly, we had nothing new to offer.”

Kishore’s ability to focus on sales was one of the factors that prompted RPG and Apax to consider him as a potential leader for Zensar. “We felt that Sandeep would be a good fit because he came from HCL Technologies, which is known for its strong and aggressive sales culture,” says Singh. Goenka adds that being based in the US, Sandeep also has a “good world view of things”. Bendor-Samuel agrees: “Zensar’s task is made easier by its CEO who is closely connected to the fast-moving innovations coming out of Silicon Valley.” 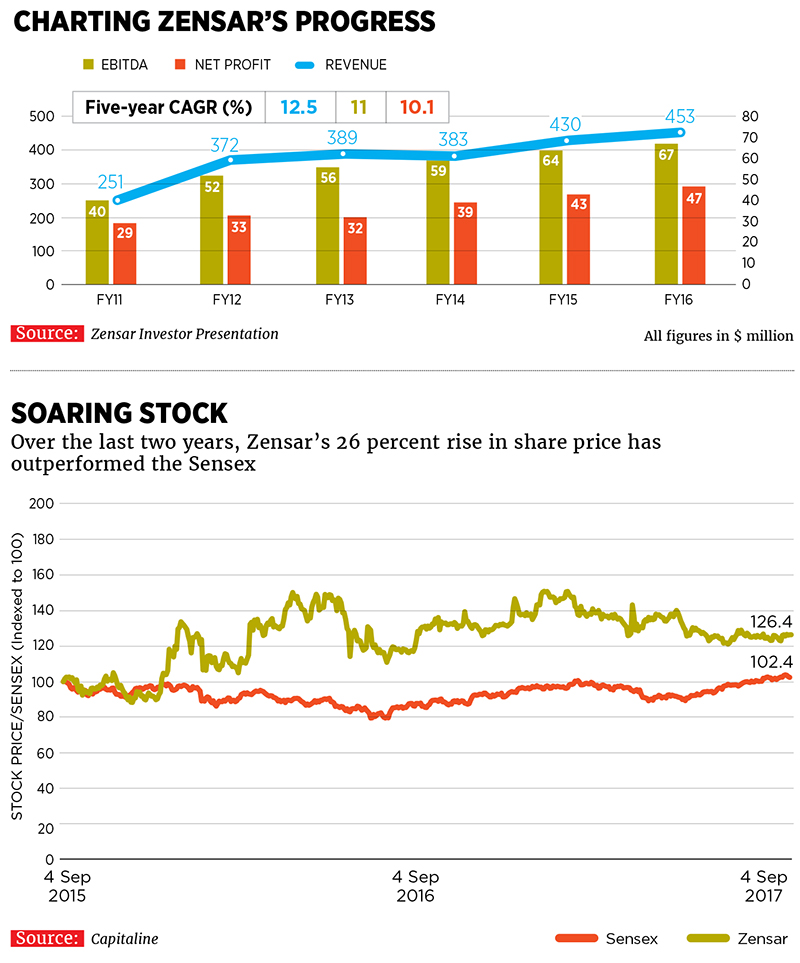 Kishore has also slashed the number of accounts on which the company was working. These, he says, were run-of-the-mill projects where the scope for value addition was limited. The focus on geographies has also been re-aligned, with new efforts concentrated on three markets—the US, UK and South Africa.

The company is aware that such measures may lead to negative short-term financial impacts, but it expects positive long-term returns. “The churn in the portfolio lays a better foundation for growth beyond FY17, driving our estimate of 12 percent revenue growth in FY18 [for Zensar],” says a Motilal Oswal research report.

There is a new management in place as well. “Half of the senior leaders, responsible for overseeing various businesses and functions, have joined in the last 12 months,” says Kishore. Some of the new hires include Sanjeev Malik, senior vice president, large deals; Ullas Nambiar, head of ZenLabs, an in-house initiative to create innovative digital solutions; chief financial officer Manoj Jaiswal; John Blackburn, executive vice president and head, digital commerce business; and Malay Verma, executive vice president and head of US sales.

The Apax Angle
Apax bought its current stake in Zensar from Electra Partners (since renamed Epiris), another PE group that was invested in Zensar for 18 years, and was looking to exit the company. The seeds for Apax’s investment in Zensar came from its partnership with iGate to acquire Patni Computer Systems. “That was the first template where we backed a tier-II IT platform, upgraded the management team and saw what impact it could have in terms of improving the value proposition and market performance,” says Singh.

Apax sold its 28.91 percent stake in iGate to French IT services company Capgemini in July 2015. The deal, valued at $4 billion, saw Apax make a nearly-four-fold return, which it was looking to re-deploy in the Indian IT space when the Zensar opportunity presented itself, Singh says.

The UK-based Apax’s global portfolio of companies worth $45 billion is also a big opportunity for Zensar to tap into, says Kishore. For instance, the IT firm has already started working with FULLBEAUTY, an American plus-size apparel and home goods brand, where Apax is an investor.

Apax believes that Zensar could be its next multi-bagger after iGate. It is possible for Zensar to garner 40-50 percent of its revenue from digital services, says Singh.

“In the digital world, transaction sizes are much smaller. While these smaller projects may not make commercial sense for larger companies, they are very exciting for mid-tier firms like Zensar,” says Jaideep Mehta, managing director, India and South Asia, at market intelligence and advisory firm IDC.

Singh believes that “theoretically” it is possible for Zensar to double its revenue to reach close to a billion dollars in the next five years; and that “in general” Apax looks at a 20-25 percent internal rate of return across all its portfolio companies.

The US Conundrum
One factor that Zensar will have to mitigate is the regulatory challenges in the US and UK, where the government is seeking to protect jobs for locals by bringing in stringent visa norms for immigrant workers.

According to Kishore, the days of shipping workers from India for entry-level IT jobs to the US are over. The digital solutions on which companies like Zensar are focusing will need some people to be onsite and these people will need to be hired locally, Kishore says. “It is the right thing to do. You have to invest in the country in which you operate and our focus will be to hire more in America,” he says.

In its 2015-16 annual report, Zensar says the impact of digital is akin to the Butterfly Effect—the concept that small causes can have large effects.

Taking that metaphor further, Zensar has been a caterpillar cocooned for far too long. And it remains to be seen if the global thrust on digital proves to be the catalyst for the technology firm to break out and take flight.

(This story appears in the 12 May, 2017 issue of Forbes India. To visit our Archives, click here.)

Tweets by @forbesindia
What happens when the same investors own everything?
Generics billionaire Satish Mehta is in the eye of a storm over overpriced drugs