The man who defines humanity with his philanthropy

Fostering the Spirit of Giving 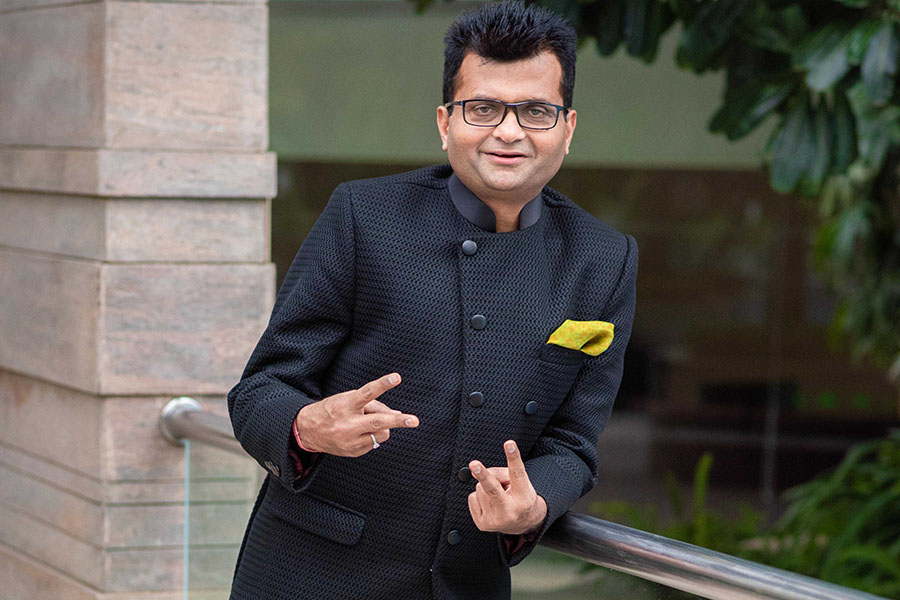 Dr Aneel Kashi Murarka, MD, Mirachem Industriies, and Founder of Social Enterprise Ample Misiion is known for his generosity and magnanimous personality who does what is right for fellow Indians The Big Changemaker Known as the Common Man's Philanthropist—Dr Aneel Kashi Murarka has touched the lives of the needy and of those who he feels are setting an example for others through their good deeds in the past three decades. A personality that is worth taking inspiration and learnings from about generosity—Aneel loves to help with all his might, time, and money. He is the embodiment of kindness which exudes how imparting happiness brings joy to your own self. The Backbone Being the eldest grandson, Aneel was bestowed with responsibilities. It was his grandfather who instilled the principles of nationalism and social service in him. While Aneel’s father Mr Kashi Murarka was the first in the family to venture into business without any financial backing and rise from the ranks of a simple trader to become a manufacturer of certain repute – founder of Mirachem Industriies. Aneel was next in line to prove his mettle. As a young businessman, Aneel took Mirachem Industriies to newer heights. From the domestic market, he went a step ahead and entered the international arena. He tries to work on zero waste policy at his manufacturing unit. Generosity in his Genes For Aneel philanthropy is not just a CSR project but a value and learning which has come down the generations to serve the fellow human beings. An entrepreneur, a humanitarian, producer of public awareness films, a writer, and a driving force behind his social enterprise ‘Ample Missiion’ which has a pan-India presence that focuses its efforts on alleviation of poverty, employment creation, providing education to the underprivileged children and other burning social issues including communal harmony, empowering women and marginal communities, and stand up for the voiceless or the unheard. Aneel as the trustee of the family-owned SAMARPN (C B Murarka Charitable trust), has been involved in the establishment of several public utility projects along with his family members, which are now strongholds in the local community both in Mumbai and his hometown Lachhmangarh, Sikar-Rajasthan. Despite being a businessman by profession Aneel found his true calling in being a humanitarian. He strives to bridge the gap between mainstream society and marginalised communities. With cinema having the power to spur a sea of emotions and inspire thousands together, Aneel understood co-relation between mass media and social outcomes and decided to use his knowledge judiciously. His films have successfully addressed many important social issues like smoking & tobacco use, cleanliness & Swachhta Abhiyan, menstruation & sanitary pads, teen suicide, breast cancer, road safety, drink & drive, girl child empowerment, and patriotic themes. Recognising his work, Aneel was appointed as one of the ‘Swachh Bharat’ Ambassadors - An honour hitherto reserved only for national celebrities by the Ministry of Urban Development. He began a rapid toilet construction programme and built hundreds of toilets in remote villages of Bihar and Kashmir. About Ample Missiion Awards Ample Missiion deals in organising inspirational Award Shows. The Shoorveer Awards honour lion-hearted individuals i.e. people who have known no fear and pursued extraordinary acts of bravery often at the expense of their lives. Bharat Prerna Awards honour those who have risen above their conditions, whether it be a physical disability, mental illness or sensory deprivation, and shown extraordinary feats of courage. Awards Zindagi Ke honours the supreme valour, courage, and dedication of the unsung heroes – the men in uniform, who have selflessly devoted and sacrificed their lives for our country. Aneel is leading a range of social upliftment programmes which include educational initiatives for slum and rural children through weekly coaching and computer learning, Adivasi upliftment activities ranging from healthcare to employment creation through ‘Warli Art’, sporting and talent hunt camps for tribal kids and Adivasi youth. Ample also conducts hunger elimination programme for urban poor with free distribution of meals to homeless and in turn providing livelihood opportunities for housewives who are engaged in preparing the meal packets from home; showcasing the talent of Transgenders through innovative approaches, creating livelihood options for Acid attack survivors are a few other opportunities which Aneel has created.  He created rural healthcare facilities for women and children living in villages, encourages Anti-Plastic movement, organises large scale tree plantation drive in Mumbai and other states, potholes filling activities for accident prevention in cities, organising cleanliness-hygiene workshops for school kids & women, providing equal opportunities for differently-abled individuals and many more such signature campaigns that are widely known in the local community for their impact. In 2019, Aneel with Team Ample Missiion created history at Bombay Times Fashion Week, the show on inclusiveness. Transqueen India winner Navya Singh and Transgender activist Laxmi Narayan Tripathi were the showstoppers. Aneel did a repeat feat of the same in 2020 with the show titled “Sindoor Khela” inspired by the Times of India #NoConditionsApply campaign. The collection aimed to empower women to challenge norms that lead to unfair traditions imposed on them for the last many years. The models were acid-attack survivors, single moms, widows, and transgenders. Amidst the global pandemic, Aneel with Team Ample Missiion, spearheaded urgent humanitarian initiatives across India. This included daily wagers, homeless people, stranded inter-state migrant labourers, transgenders, acid-attack survivors, dwarf actors, and slum families. He provided them with financial assistance, and dry ration kits with daily use items along with essential medical items for survival including Corona safety kits, PPE suits, gloves, masks, and sanitizers. Aneel is widely covered in news media and honoured at award functions for his outstanding work for society. Aneel is a hope for people to have more empathy for others. Disclaimer: The views, suggestions and opinions expressed here are the sole responsibility of the experts. No Forbes India journalist was involved in the writing and production of this article.

Tweets by @forbes_india
The synonym of versatility and a powerhouse of Talent
Dhanteras 2020: How much do you really know about gold?