The Expanding World of Drugs 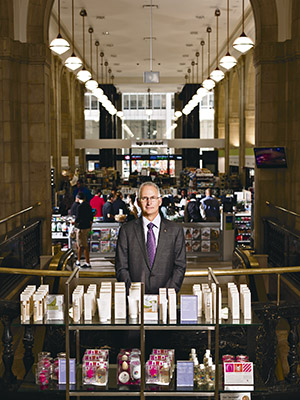 When Gregory Wasson hits the ballroom stage at Chicago’s Navy Pier next January for Walgreen’s annual meeting, he’ll ﬁnally have an answer for all the griping, greying shareholders who worried out loud for years about whether a company that opened a new store every 17 hours, adorned with the familiar iconic red mortar and pestle or red ﬂying ‘Ws’, would one day run out of street corners for expansion.

Thanks to an alliance with the Italian billionaire Stefano Pessina and his Alliance Boots chain, which has a similarly popular pharmacy brand throughout Europe, there’s little chance of that now. Wasson is en route to forging the ﬁrst global pharmacy chain, with worldwide buying power and a massive distribu- tion network. “This is certainly our ﬁrst step into Europe and beyond,” says Wasson, a pharmacist who of- ﬁcially got his start as an intern in the corporate office during his Purdue University pharmacy school days 32 years ago and command of the drug- store chain in 2009. “This gives us an international platform. This allows us to accelerate where we have been going the last two or three years.”

And though Wasson won’t say it, the hookup is also something else: A hedge against ObamaCare. While other US pharmacies struggle with tightening payments from Wash- ington, cash-strapped states and penny-pinching insurance compa- nies, Wasson, 53, and Pessina, 71, hope to sidestep an era of growing government controls to capitalise on emerging markets with fattening pocketbooks, countries looking to access safe and eﬀective medicines.

“The US government’s becoming the larger payer of prescription drugs could be a larger long-term challenge for pharmacy reimbursement,” Mark Miller, an analyst at William Blair, wrote recently. “So, while Walgreen has framed the opportunity for global expansion as an incremental opportunity, it also does diversify the business away from the potential long-term risk.” 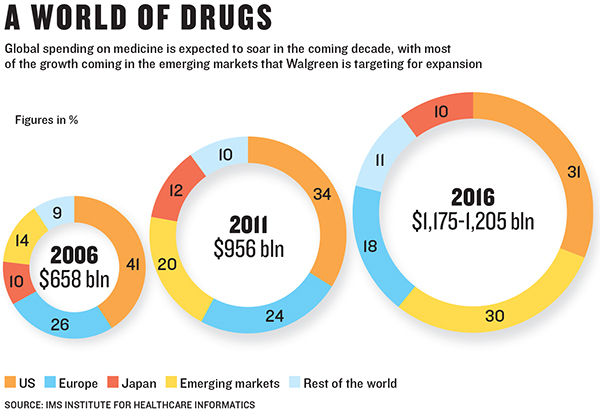 Announced in June, Walgreen’s initial investment for 45 percent of Alliance Boots consists of $4 billion in cash and 83.4 million Walgreen shares (making Pessina WAG’s largest shareholder). Walgreen plans to acquire all of the company in three years to create the world’s largest pharmacy-led healthcare business, handling 10 percent of the world’s prescription volume and delivering products to 170,000 pharmacies, doctors, health clinics and hospitals around the world. “They bring a trusted supply chain that would avoid counterfeit issues and others that emerging markets have faced,” says Jeﬀ Jonas, a healthcare analyst with Gamco Investors in New York. “They would probably focus ﬁrst on being the drug wholesalers.”

The ambition matches the opportu- nity. A new report by pharmaceutical market research ﬁrm IMS Health said “pharmerging markets” that include China, India and Brazil will nearly double their spending on medicines “from $194 billion last year to $345 billion to $375 billion by 2016.”

And while ObamaCare is certainly a challenge, it isn’t the only one in the US. Walgreen is also under pressure to control costs in the US from private employers, which could be seen from its yearlong dispute with pharmacy beneﬁt manager Express Scripts over payment issues. That tussle officially ends in mid-September, when Walgreen will once again honour the beneﬁt manager’s drug cards. But the dispute took its toll on Walgreen’s traditionally reliable earnings, which fell 10.8 percent to $537 million in the third quarter from $603 million in the same quarter a year ago. Sales, meanwhile, were down 3.4 percent to $17.8 billion in Walgreen’s third quarter from $18.3 billion in the company’s ﬁscal 2011 third quarter.

Given the uncertain return of customers lost to rivals like CVS and others during the Express Scripts imbroglio, many investors don’t like the timing of