The Long Arm Of Broadband

Ask any telecom commentator in India about the success of the industry in the country and he will probably start extolling the reach of mobile telephony in India — 500 million active connections and 15-20 million new ones being added every month. Interrupt him to ask the number of Indian broadband Internet users and the voice often turns into a mumble — ­7.5 million.

As broadband penetrations go, it is a number so abysmal that even if it were increased by almost 50 percent, Microsoft Excel would still say the answer was 1 percent of the total population. 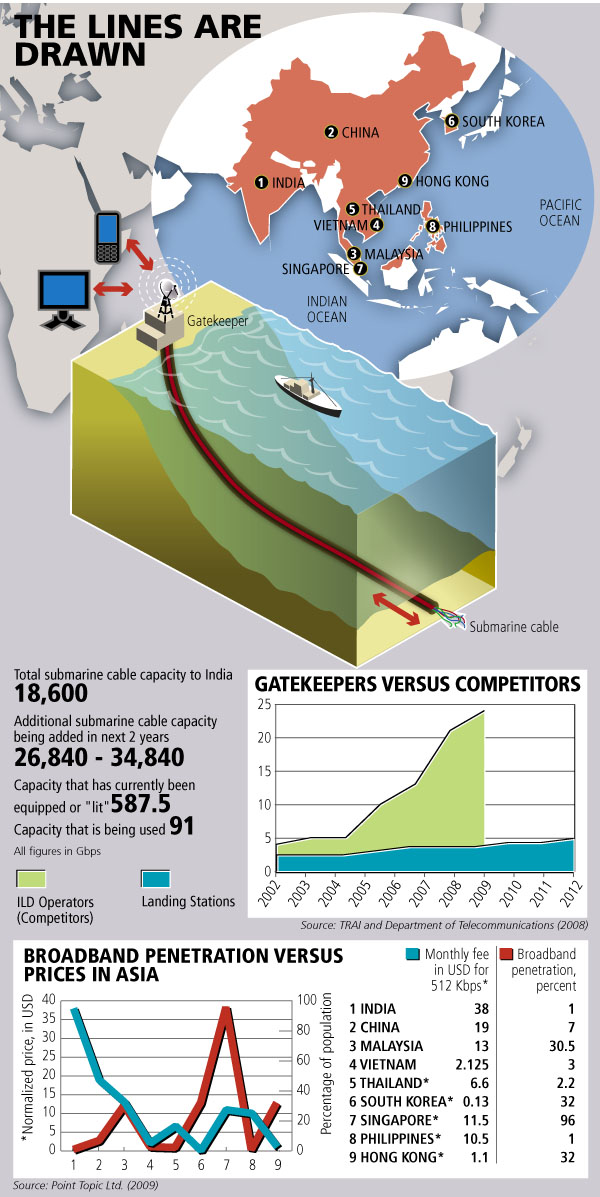 Infographics: Malay Karmakar
One of the major reasons for this says Singapore-headquartered Pacnet, a provider of data solutions to businesses, is the high price paid by both Indian consumers and businesses for Internet access. Pacnet’s assertion is supported by statistics from a report prepared by broadband research firm Point Topic — not only does India have among the slowest Internet speeds in Asia (other countries have speeds ranging from 1 Mbps-100 Mbps; the most common one in India is 512 Kbps), the prices paid by Indians for the same are the highest.
William Barney, the CEO of Pacnet, feels his company can help bring Internet prices down for Indians. The foundation for Pacnet’s India plans are submerged under Asian seas and the Pacific Ocean — over 36,000 kilometers of submarine fiber-optic cables valued at over $4 billion.
Submarine cables are the preferred medium for sending and receiving voice and data internationally. Internet service providers (ISPs) and IT infrastructure providers buy annual submarine capacity at wholesale rates before selling it to their users for retail prices. Laying these cables costs billions of dollars and most of them are owned by consortiums composed of usually telecom companies, each of which shares the cost, ownership and bandwidth proportionally. There are currently nine different submarine cables that land in India.
Barney says a 10 Gigabits per second (each Gbps is 1000 Mbps) dedicated Internet connection, used mostly by businesses or ISPs, costs between $9 million - $11 million annually in India. In China the same would cost just $1.5 million - $2 million, he says.

Pacnet plans to invest $150 million, individually or with partners, to extend its submarine cable to Chennai in India. Once the new cable becomes operational by 2012 the supply of international bandwidth available to Indians will vastly increase, with increased supply hopefully leading to lower end-user prices.

In Philippines, says Barney, international bandwidth prices for businesses crashed 70-80 percent from $17 million for a 10 Gbps line between 2001 and 2004. One of the triggers for this was the connection of Asia Global Crossing’s (one of the two companies that merged to form Pacnet) EAC submarine cable and the building out of land-based fiber-optic network to carry traffic within the country. Cheaper bandwidth prices played a big role in making the Philippines BPO industry globally competitive.
Pacnet hopes to do an encore in India when its new cable becomes operational in 2012.
The reason high Internet prices coexist alongside an oversupply of international bandwidth in India is because just three companies control the infrastructure to sell it — VSNL (owned by the Tata Group), Bharti Airtel and Reliance Globalcom. These three companies are the only ones that operate “landing stations” (state-owned BSNL operates one too, but for a cable connecting India to Sri-Lanka alone) — facilities where inland cables are connected to submarine cables and managed round the clock.
And close to 400 businesses that provide Internet-based services to Indian businesses and consumers buy their international bandwidth from these three operators at wholesale prices, over which there is no regulatory oversight.

In fact Reliance itself, before setting up its own landing stations, had to fight VSNL in Indian and international courts to enable its FLAG submarine cable to be sold through VSNL’s Mumbai landing station. Reliance eventually won $19 million as damages from VSNL as compensation for lost opportunities stemming from VSNL’s monopolistic control over its landing station (Reliance’s original claim was for $406 million).
Chris Wilson, Pacnet’s business development head, says he is confident Pacnet’s cable will bring down Internet prices in India for three reasons. Firstly Pacnet’s cable will land on India’s east coast, where there are only two other operators — VSNL and Bharti Airtel. The entry of a third competitor is usually the most disruptive in most markets.
Wilson says Pacnet will also ensure that its landing station are managed in an open and transparent manner, allowing easy access to wholesales bandwidth buyers. “Traditionally people have controlled landing stations by forcing expensive cabling and interconnects onto buyers, stuff which isn’t technically expensive but made so commercially by operators,” he says.

Finally Pacnet claims the prices it will pay for building a new cable to India today will be much lesser than those paid by other operators even four or years back. Wilson feels that too should allow Pacnet to offer more competitive prices in India.
Col. (Retd.) H.S. Bedi, chairman of Tulip Telecom, a provider of data and telecommunications services to Indian companies and one of the major buyers of international bandwidth, feels prices will come down, but not entirely because of Pacnet’s impending entry. He says there is no shortage of submarine bandwidth in India, therefore addition of new capacity will not affect current prices all that much. This is born out from data compiled by TRAI, showing a total capacity of 18.6 Tbps across all existing submarine cables reaching India. A mere 0.5 percent of this capacity was used in 2008. In addition Bharti Airtel has two new shared submarine cables in the pipeline, the SJC and the EIG, together adding between 20.8 Tbps to 26.6 Tbps of additional capacity.
The reason bandwidth prices will come down, feels Bedi, is the entry of global telecom players like AT&T, Cable & Wireless and BT into the bandwidth resale market in India. But the very same companies were also reported to be complaining about high wholesale bandwidth prices to TRAI in December 2009, asking for some form of price regulation.
So it could be that Pacnet turns out to be the clearest and nearest alternative for lower Internet prices in India.