As demand for the fuel that powers Indian economy soars, government trips on subsidy bill and oil firms reel under losses 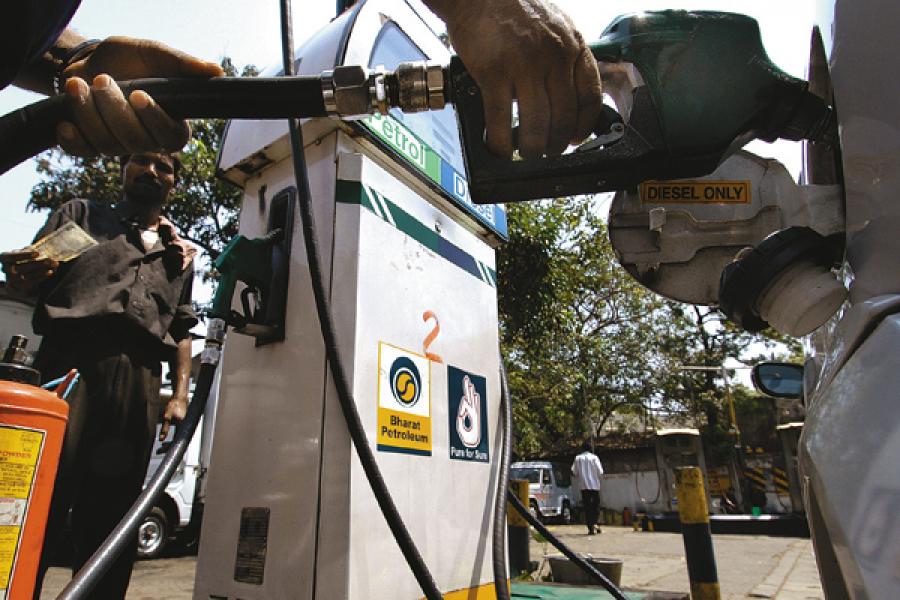 For almost five decades, growth in diesel demand in India has tracked the GDP growth, give or take a few points. This is changing fast and to cataclysmic effect on the public sector oil companies and government finances. Since the beginning of 2012, demand for the fuel that powers the Indian economy has begun to grow faster than ever before. It is now about twice the GDP rate. This is largely because diesel that was earlier used largely for transportation is now being used in a big way to generate power. The higher consumption has led to a huge increase in subsidies that threaten to wreck the system.

The three public sector oil marketing companies have reported a loss of Rs 40,500 crore in their first quarter (April-June’12). The loss was so high, their highest ever, partly because they did not receive any subsidy from the government in this period. The government had been compensating them, and is likely to continue to do so, with the twin mechanism of cash subsidies (which have replaced oil bonds for the past two years) and discounts from oil producers like ONGC and OIL. But it is getting difficult to keep up with this as demand grows. Oil subsidies accounted for 16 percent of the fiscal deficit in the last budget. The figure is likely to be higher in the next budget: As the subsidy burden grows, realpolitik makes it tough to pass it on to customers. Fears of inflation and the possibility of a drought in many parts of India are tough realities for the government to contend with.

“Apart from the losses, subsidised diesel has a lot of unintended consequences,’’ says Ashok Sinha, former chairman of Bharat Petroleum. “For the oil companies, it simply means they just have little cash left to invest in future. Even to keep up with the GDP growth, they will have to expand refining capacities. They also have to look at strategic opportunities to secure their business, this becomes very tough,” he says.

If the losses continue this quarter, the net worth of Indian Oil, Bharat Petroleum and Hindustan Petroleum could be eroded substantially. If the losses increase to more than half the net worth, they could turn into BIFR (Bureau of Industrial and Financial Reconstruction) cases. Oil company executives involved with treasury operations say the more immediate concern is that they might breach the approved borrowing limits from banks. Over the last one year, their interest costs have more than doubled to Rs 10,500 crore in 2011-12 from Rs 5,100 crore in 2010-11.

The other consequence is the impact on government borrowings. The latest CRISIL research report on oil marketing companies says oil subsidies constituted 32 percent of the government’s total subsidy burden in 2011-12, amounting to Rs 83,500 crore. If the prices of regulated fuels are not revised upwards, the borrowings (to pay the oil companies) may surpass 2011-12 levels. This will adversely impact the government’s fiscal position, assuming other factors remain constant. It is likely to exert upward pressure on interest rates and will also limit the government’s ability to fund crucial social and infrastructure projects.

The Energy Inequation
Arvind Mahajan, who heads the energy and natural resources practice at KPMG, says it is a pity that energy is still being dealt by the government in separate silos—coal, oil & gas and power are separate ministries. He says we need a unified approach. A big part of the problem is in these three areas, and they are related. The subsidies on diesel and power are linked in many ways, he says. Funding for investments in the power business is drying up because the pricing issue isn’t sorted out. This may soon be the case for oil and gas, he fears.

Oil industry analysts say diesel demand may rise even further. The fuel is rapidly replacing other petroleum products because its prices have been kept lower. It has replaced petrol as the fuel of choice for private car users. The CRISIL report says the difference between the running cost for a petrol car vis-à-vis a diesel car has gone up by about 85 percent in the last 7 to 8 years. Diesel cars are now 38 percent of total car sales, up from 20 percent in 2005-06.

Diesel has also replaced other more expensive petroleum products like furnace oil and naptha. Earlier this month, the ministry of environment rejected infrastructure company GVK Power’s plea to use diesel to revive its Jegurupadu-II power project. Units of the 360MW project have been working at lower-than-optimal levels as supplies from RIL’s KG-D6 gas fields, its primary fuel, have halved. The company wanted to increase production by using diesel. Though GVK’s plans were nixed by the ministry, diesel is being used to generate power all over the country. “The fastest growing consumers are mobile companies who need reliable power for their cellular towers,” says an oil company executive. The towers account for about 10 to 12 percent of the total demand, he says. Large commercial users like malls have also increased their diesel use. All these users add to the subsidy burden—they are being subsidised by the government to the extent of Rs 13 on every litre used.

How to fix it?
The diesel conundrum is turning out to be one of the sharpest thorns in the government’s side. Expert committees set up over the past 15 years have advised a gradual decontrol of prices, but the government has been unable to muster enough courage. Successive petroleum ministers have, instead, chosen to hike prices when the situation becomes untenable. This is likely to happen this time around too, once the monsoon session of Parliament is over. The UID project may help screen consumers and allow some direct subsidies to be passed on to the consumers of kerosene and LPG. But diesel is much more widely used and it will be difficult to target needy users.  One immediate solution could be higher prices for bulk customers, like the railways and state buses. Since these are government-owned entities, they might be willing to pay more for the fuel.

Dual pricing of diesel, with a higher price for those who can afford it, has often been suggested but is very tough to implement, says Mahajan. Unlike petrol, the government allows the sale of diesel in barrels. Users with agricultural pump sets and generators can officially buy the fuel from petrol pumps and enjoy the same subsidies as transporters. The ideal scenario would be to sell the fuel at a higher price to power generators—the problem is how to do it. The kerosene experience has shown that it is very tough to prevent the subsidised fuel from being diverted.

Many energy economists think energy use in India is very wasteful. This can only be corrected if fuel is priced at its true cost. Warmer malls and car-pooling could help save the day.

Tweets by @forbesindia
65 Things We Love About India
Blue streak: The BMW M5