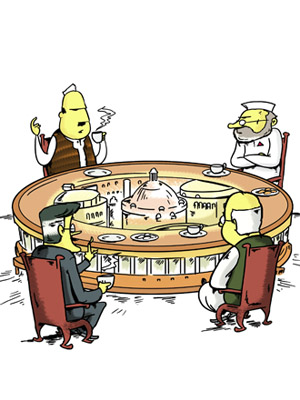 After a blockaded session in winter, the threat of disruption still hangs over the Indian Parliament. The question is whether a joint parliamentary committee (JPC) should investigate if and how the state was short-changed in the telecom spectrum sale.

Opposition leader Sushma Swraj recently told a television interviewer that the Opposition’s intention was not to put the government in the dock, but to look into the larger issue of corruption, governance and the influence of corporates on polity. The government maintains that the issue can be tackled by the Public Accounts Committee (PAC) of the parliament, headed by BJP’s Murli Manohar Joshi. Prime Minister Manmohan Singh even volunteered to appear before it to swat claims that the government was avoiding a JPC because it would summon him to depose.

“There is no reference to a JPC in the Constitution,” says former Lok Sabha secretary general Subhash C. Kashyap. “It is a media creation.”

Technically, any parliamentary panel with members from both Houses can be called a JPC. Most departmental committees are JPCs. Even the PAC has members from both Houses. Lok Sabha Speaker Meira Kumar is heading a JPC on Maintenance of Heritage Character and Development of Parliament House Complex. A JPC is an ad hoc panel constituted through a motion of Parliament with a specific mandate.

The JPC as an investigative body caught the public imagination when one was set up in 1987 to probe corruption charges in the infamous Bofors gun deal. That was followed by one in 1992, to probe a stock market scam. The last investigative JPC was formed in 2001, again to probe a scam related to the stock market.

The PAC, on the other hand, is the oldest committee of Parliament and is usually concerned with looking into how government money is spent. In that, the Comptroller and Auditor General (CAG) acts as its friend and guide, said Joshi recently. The PAC took up the telecom spectrum issue after a CAG report said that the state may have lost as much as Rs 1.76 lakh crore due to a faulty auction.

One view is that the PAC cannot summon ministers to give evidence. But Kashyap says there is no such bar. There is indeed a direction from a former Speaker, G.V. Mavlankar, that says ministers cannot be called before the PAC. “[This] can be reversed by another direction from the Speaker,” he says, citing the precedent of C. Subramaniam, who appeared before the PAC as steel minister in 1966. Even in a JPC, if majority members are from the ruling coalition, they can vote for not calling a minister before it, he points out.

Meanwhile, the political tug-of-war continues with neither the government nor the Opposition giving in. A top government official says the Opposition wants a JPC because it will be a good stick to beat the ruling party with. That is precisely what the Congress and its allies fear. They think the BJP will try to stretch the JPC to at least the 2012 Uttar Pradesh elections. Even in 2011, five states, including West Bengal and Tamil Nadu, are headed to Assembly elections. A JPC could be a potential headache in these circumstances.