As the US recovers from the effects of Hurricane Sandy, here’s a look at some of the most devastating natural calamities in history, and some not so long ago 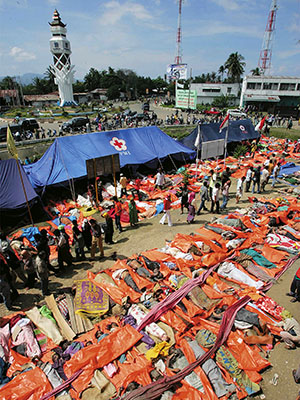 Image: Reuters
Aerial view of the bodies of thousands of victims of the tsunami which hit the Indonesian city of Banda Aceh on the island of Sumatra

1. Earthquake in Shaanxi, China, 1556
Considered to be the world’s worst earthquake, it took place during the Ming Dynasty and claimed 830,000 lives. It took place on January 23 across 97 counties in 10 provinces. In some provinces, about 60 percent of the population was killed, as many of them lived in artificial caves along the cliffs, which were destroyed by landslides.


2. Cyclone Bhola, Bangladesh, 1970
Although not the strongest cyclone, this was the most devastating one in history. The category 3 cyclone made landfall on what was then East Pakistan on November 12, with a wind speed of 115 kmph, wiping out low-lying areas and destroying crops. An estimated 500,000 people died. The political fallout of relief efforts (or, rather, their absence) led to a civil war and the formation of Bangladesh in 1971.


3 GREAT FloodS, China, 1931
After two years of drought, the country faced heavy snowfall and then rain. This led to the catastrophic flooding of rivers, the worst the nation, and perhaps the world, has ever seen. The flooding of the Yangtze, which covers an area of 1,300 sq km, followed by the flooding of the Yellow and Huai killed approximately 3.7 million people, either directly or through resultant famine and epidemic.

4. Volcanic eruption in Tambora, Indonesia, 1815
The eruption of Mount Tambora is the worst volcanic eruption in recorded history. Explosions from the eruption were heard 2,600 km away, while ash fell up to 1,300 km away. The number of people who died from direct volcanic effects was about 11,000, but several thousand more died of starvation and disease, taking the total death toll to 71,000.

5. Tsunami, Indonesia, 2004
Considered history’s worst tsunami, it is the most recent natural disaster of this magnitude. An earthquake measuring around 9 on the Richter Scale—the third largest ever recorded—near Sumatra on December 26 triggered waves up to 98 feet high that killed around 230,000 people across 14 countries. Worst hit was Indonesia, followed by Sri Lanka, India and Thailand.

Tweets by @forbesindia
Change.Org: A Startup Making Social Campaigns Easy
Is Nokia On the Brink of Oblivion?