Television's Impact on the Status of Women

The growth of television in the developing world over the last two decades has been extraordinary. Estimates suggest that the number of television sets in Asia has increased more than six-fold since the 1980s, increasing from 100 million to 650 million. In China, television exposure grew from 18 million people in 1977 to 1 billion by 1995. In more recent years, satellite and cable television availability has risen dramatically. Again in China, the number of people with satellite access increased from just 270,000 in 1991 to 14 million by 2005. Further, these numbers are likely to understate the change in the number of people for whom television is available, since a single television is often watched by many. India has not been left out of the cable and satellite revolution: A recent survey finds that 112 million households in India own a television, with 61 percent of those homes having cable or satellite service.

This figure represents a doubling in cable access in just five years from a previous survey.
Beyond providing entertainment, television vastly increases both the availability of information about the outside world and exposure to other ways of life. This is especially true for remote rural villages, where several ethnographic and anthropological studies have suggested that television is the primary channel through which households get information about life outside their villages. Most popular cable programming features urban settings where lifestyles differ in prominent and salient ways from those in rural areas. Anthropological accounts suggest that the growth of TV in rural areas has had large effects on a wide range of day-to-day lifestyle behaviors, including latrine building and fan usage. 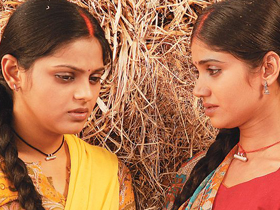 Gender inequality is significantly worse in rural than in urban areas.
In a recent paper, “The Power of TV: Cable Television and Women’s Status in India,” University of Chicago Department of Economics professor Emily Oster and Robert Jensen of the University of California, Los Angeles, explore the effect of the introduction of cable television in rural areas of India on a particular set of values and behaviors, namely attitudes toward and discrimination against women.
Although issues of gender equality are important throughout the world, they are particularly salient in India. In a 1992 article, Nobel Prize–winner Amartya Sen of Harvard University argued that India had 41 million “missing women”–women and girls who died prematurely due to mistreatment resulting from a dramatically male-biased population. The population bias toward men has only gotten worse in the last two decades as sex-selective abortion has become more widely used to avoid female births. More broadly, girls in India are discriminated against in nutrition, medical care, vaccination, and education. Even within India, gender inequality is significantly worse in rural than in urban areas.
Many characters on popular soap operas have more education, marry later, and have smaller families–all things rarely found in rural areas; and many female characters work outside the home, sometimes as professionals, running businesses, or in other positions of authority. By exposing rural households to urban attitudes and values, cable and satellite television may lead to improvements in status for rural women. It is this possibility that Jensen and Oster explore in their paper. In particular, they evaluate the effect of the introduction of cable and satellite television on a variety of measures of women’s status: autonomy, attitudes toward spousal abuse, son preference, and fertility. In addition, they explore the effects on education for children, which some authors have argued will increase when the status of women is higher.
Measuring the Power of Television
While television was first introduced to India in 1959, for the first three decades almost all broadcasting was in the hands of the state, and the content was primarily focused on news or information about economic development. The most significant innovation in terms of both content and viewership was the introduction of satellite television in the early 1990s. In the five years from 2001 to 2006, about 30 million households, representing approximately 150 million individuals, added cable service.
Soap operas are among the most popular shows on cable: The most popular show in both 2000 and 2007 (based on Indian Nielsen ratings) is “Kyunki Saas Bhi Kabhi Bahu Thi,” (Because a Mother-in-Law was Once a Daughter-in-Law, Also), a show based around the life of a wealthy industrial family in the large city of Mumbai. By virtue of the fact that the most popular Indian serials take place in urban settings, women depicted on these shows are typically much more emancipated than rural women. Further, in many cases there is access to Western television, where these behaviors differ even more markedly from rural India. Based on anthropological reports, this seems to have affected attitudes within India. Several respondents in one study thought television might lead women to question their social position and might help the cause of female advancement. Another woman surveyed reported that, because of television, men and women are able to open up more.

The research by Jensen and Oster differs from these mostly anthropological studies by providing a more quantitative analysis that measures how large an impact television has on the status of women. “It’s one thing to ask people if they think TV affected gender attitudes and behaviors,” explains Oster. “Even if they say yes, it’s quite difficult to say anything about magnitudes.” The authors also emphasize identifying causal effects by trying to ensure there aren’t any factors in their data driving both the expansion in access to television and changes in the status of women that would lead to the wrong conclusion that the former causes the latter.

The authors’ primary analysis relies on the Survey of Aging in Rural India. This survey includes roughly 2,500 women in 180 villages in India; they were interviewed once a year for three years in 2001, 2002, and 2003. These years represent a time of rapid growth in rural cable access. During the three years of the study, cable television was newly introduced in 21 of the 180 participating villages. The analysis in the paper relies on comparing changes in gender attitudes and behaviors between years across villages based on whether (and when) they added cable television. The authors used several measures of the status of women.
They began with two measures of attitudes: attitudes toward beating and son preference. Attitudes toward spousal abuse were measured by asking women whether beating is acceptable in six possible situations (if a woman neglects children, is unfaithful, etc.), and counting the total number of situations in which she reports beating is acceptable. Son preference was measured by asking women who want more children whether they want their next child to be a boy.
Jensen and Oster found large effects of cable on both of these variables. Women who live in villages that introduce cable see large declines in both the number of acceptable beating situations and son preference; villages that do not introduce cable see no change. This change happens between 2001 and 2002 for villages that introduce cable in 2002, and between 2002 and 2003 for villages that introduce cable in 2003. In other words, the timing of the change in attitudes lines up with the timing of the change in cable access.
Indicators involving changes in actual behaviors, as opposed to attitudes, likewise suggest substantial improvement in women’s status. Jensen and Oster measured female autonomy based on responses to questions about participation in household decision making: does the woman make choices about obtaining health care, purchasing goods, do they need to get permission to visit friends and family, etc. Overall autonomy increased significantly after the introduction of cable and, again, this change happened at the same time as the cable introduction. The authors also found a decrease in pregnancy after cable introduction.
The effects of cable happen rather quickly, with changes observed in the first year following cable introduction. This is consistent with prior work on the effects of media exposure, which typically finds rapid changes–in many cases within a few months–in behaviors like contraceptive use, pregnancy, and building latrines. These effects are also large: between 45 and 70 percent of the gap in attitudes and behaviors between urban and rural areas are closed by the introduction of television.
One important question is whether some other variable affects both the expansion in access to television and changes in rural women’s attitudes and behaviors. For example, it is possible that villages that are becoming more “modern” are improving in attitudes toward women and also are more likely to adopt television. If true, this would call into question the causal effect of television on women’s status.To test for this possibility, Jensen and Oster looked at whether there were improvements in any of the four status indicators before cable was adopted. They found none. “There’s no change before cable television is introduced and there is a sharp change after it is introduced,” says Oster. “And that’s what you would expect to see if cable was causing increases in women’s status.”
How Cable Television Affects Education
Research in economic development tends to indicate investments in children’s education and health care are greater when women have a bigger voice in the household. For instance, giving money to women may be better than giving money to men because women tend to spend that money on their children in ways that enhance their welfare. “If that is true, and if television comes in and improves the status of women, then it could have positive spillovers to children,” says Oster.
Attending school is one measure of children’s welfare, and the study found that school enrollment, especially among younger children, increases after cable television is introduced. There is also some evidence of a delayed effect. The impact on enrollment is stronger if households have cable for more than a year. Unlike the immediate impact observed on women, television could take longer to affect education because plans for schooling must be made well in advance and money must be saved for fees and other costs.
That simply turning on the television can improve a woman’s life as well as that of her children is particularly intriguing in light of the traditional and somewhat more complex approaches to promoting education and enhancing women’s standing in society. For instance, calls to “empower women” are often vague. Reducing poverty, building schools, and improving teacher quality in order to boost enrollment may be as difficult to accomplish as the problems they are attempting to solve. While cable television clearly cannot solve any part of these problems that is in fact related to an underlying structural problem such as poverty, the possibility that television can cheaply and quickly influence education and the status of women by changing women’s attitudes and behaviors offers significant promise.
Emily Oster is assistant professor at the University of Chicago Booth School of Business
“The Power of TV: Cable Television and Women’s Status in India.” Robert Jensen and Emily Oster. Forthcoming in the Quarterly Journal of Economics.