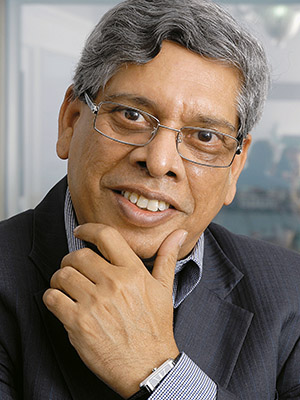 
Q. After the boom years, the global mining and metal sectors are now going through a doom period. What went wrong?
The worst thing to happen to the steel and mining sector was the boom. Some of the experienced CEOs never thought that a boom would last forever. All those companies that invested between 2006 and 2008 are the ones that are now suffering. Those who didn’t fall for the boom are doing well.

Q. Like?
Japanese steel companies didn’t get into it. South Korean major Posco didn’t. They are performing better than they did in 2007-08.

Q. In early January, mining major Rio Tinto announced a record $14 billion write-down of some of its assets. How could experienced players make such mistakes?
There are many big players who tend to look at the mining sector from a strategic point of view rather than the operational. Don’t look at an asset in terms of its value, but what happens from the operating point of view.

I’m very surprised that many companies don’t even do the basic due diligence. They have financial analysts in their mergers and acquisitions team. That has to change. If it is resources that you are buying then you need to have geologists in the team.

Entrepreneurs should understand that it is better to spend $10 million or $11 million in accessing the mine. If it is an operating mine then you have the balance sheet to look at. But if it’s a greenfield [operation], then you should focus on due diligence. If money has to be lost, it is better lost while checking the resource rather than after buying it, which is a disaster.

Q. In the steel sector, going global was the favourite approach in the last five years. Was that a mistake?
Today it is showing that companies who remained local players are doing better. They don’t have extreme financial conditions or huge debts.
Korean and Japanese companies are still very much local, at least in the Asian region. Most of the Russian steelmakers are not doing too badly either, even though Severstal is having a big problem in the US.

Q. Will these setbacks change the way strategies are set?
Mining companies have got used to big operations. Today, for the bigger miners in the world to get interested in an asset, it should have at least 35 million to 40 million tonnes of reserves. But there are many in the range of 5 million to 10 million tonnes. This requires a different approach. It is typical: The bigger you grow, the less attention you give. You tend to look at just 20 percent and the rest is left on its own.