Inside our 2022 agri-tech special

From gauging the impact of digital solutions for farmers provided by agri-tech, to how drones are beginning to make an impact on agriculture, and more—our annual agri-tech issue is packed with deep reporting and analysis 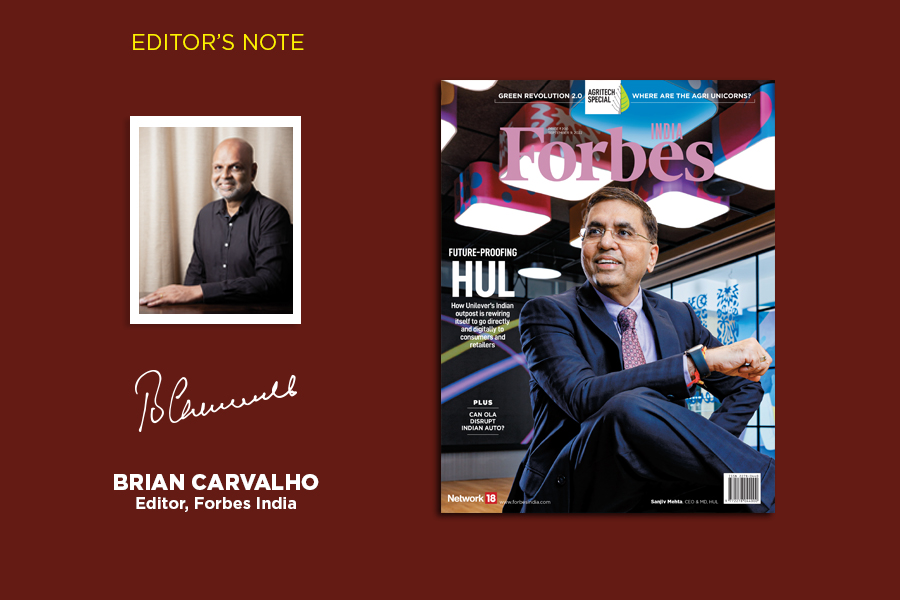 On the cover: Sanjiv Mehta, CEO and MD, HUL, is leading the charge to take the company into the next decade

If there’s one sector that’s been crying out for technology and digital intervention, it’s agriculture. Consider: India’s agri sector accounts for just under 16 percent of the economy and almost half of its employment. Reasons for the low productivity range from inadequate market infrastructure and post-harvest wastage to volatile prices and poor crop planning.
The government is doing its bit to bolster agri productivity; a year ago, it flagged off the ‘Digital Agriculture Mission 2021-24’, with the aim of using technologies like artificial intelligence, blockchain and drones.
And there are the agri startups, pulling out all stops to deliver digital solutions to farmers. That’s the focus of this fortnight’s special package. Naandika Tripathi travelled to a clutch of the country’s farming districts–from Botad in Gujarat to Junnar in Maharashtra–to gauge how agritech is changing farmer lives. Her verdict: Tech is resulting in perhaps the largest transformation since the Green Revolution, but a lot more interventions are needed to improve life on the farm.
One innovation that’s beginning to make a difference is drones. Naini Thaker travelled to south India to see how these unmanned vehicles are helping farmers in the Kuttanad region of Kerala and Tumkur district in Karnataka save costs and increase yields and productivity.
In other stories, Harichandan Arakali dives into some of India’s most valued agritech startups, including a few that are feeling the pressure of a funding slowdown. And Salil Panchal decodes why the sector hasn’t seen a unicorn yet. One reason: It’s a patience game. There’s a lot more in this agri special that begins on page 32.
The Forbes India cover story is on a company whose fortunes are closely linked to agri incomes. The challenge for Hindustan Unilever Ltd (HUL), a multinational subsidiary with a close to 90-year-presence in India, has been to stay relevant to consumers’ changing demands and tastes over the decades. As it grew into a consumer goods colossus—the top line hit ₹50,000 crore in fiscal year 2022—via mergers, acquisitions and entering new categories, the innovations had to keep coming.
Often, the Unilever outpost was nudged by local, nimbler competitors. For instance, decades ago it was a chemist-turned-entrepreneur from Ahmedabad in Gujarat, Karsanbhai Patel, who gave the HUL marketing machine a wakeup call by launching detergents and later soaps at prices lower than those of the leader. HUL was forced to react—and it reacted sharply by, for instance, launching Wheel to take on Nirma, which it did in style. Similarly, HUL had little choice but to follow the pioneers in the sachet revolution from the south, including the Chennai-headquartered CavinKare, to protect its leadership status.
Today, HUL may be gearing up for competition from a new set of nimbler rivals, those with a digital edge: The direct-to-consumer (D2C) brigade, a business model that eliminates the need for distributors and retailers. A young and aware consumer is increasingly attracted to these newer brands, many of which hold the promise of being safe, healthy and green.
Such new consumer trends aren’t lost on HUL, which is experimenting with a clutch of brands in the D2C space, both organic as well as acquired.  As Samar Srivastava writes in ‘Futureproofing HUL’, Unilever’s Indian subsidiary is responding to the shift by reconfiguring the way it works as well as rewiring its distribution architecture to go directly not just to consumers but also to retailers. For the latter, for instance, it is analysing the reams of data generated at its various business units and has created an app that allows 800,000 retailers to place orders online. For more on that digital thrust, turn to page 22.
Best,
Brian Carvalho
Editor, Forbes India
Email: Brian.Carvalho@nw18.com
Twitter ID: @Brianc_Ed