Naspers isn't a traditional VC. It does not operate a fund and has no exit horizon 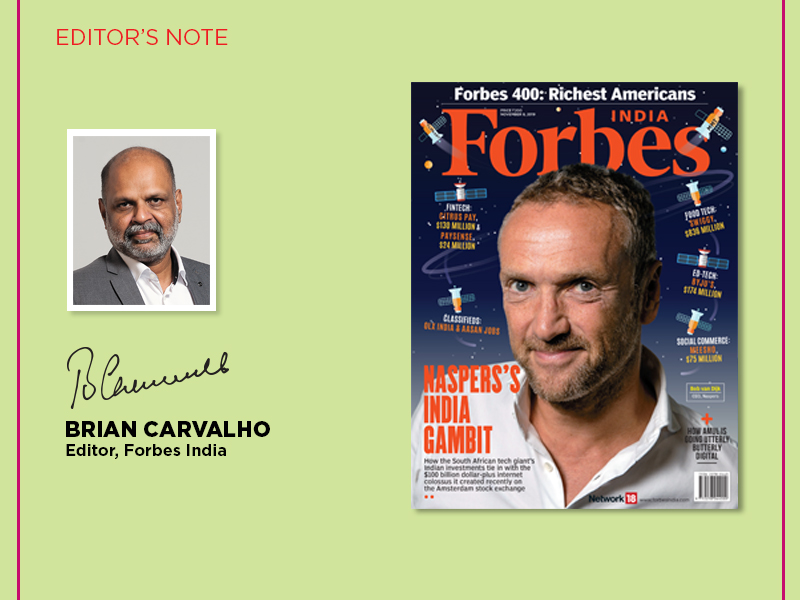 Financial Times called it ‘Africa’s SoftBank’. It’s an apt metaphor when you consider the two bets these two tech investors made—both Chinese—that proved to be the proverbial masterstrokes. If SoftBank’s $20 million punt on Alibaba almost two decades ago is now worth a little over $130 billion, Naspers’s $32 million investment around the same time in Tencent is worth almost as much.

Naspers recently spun off its international internet assets—including Tencent—into a new entity called Prosus that listed in Amsterdam. It listed with a market value of over $100 billion, making it Europe’s largest internet company.

Back in India, the portfolios of the tech investing giants are formidable. If, for instance, SoftBank has unicorns like Oyo and Paytm, Naspers has Byju’s and Swiggy. And there are the investments via Tencent and Alibaba, too, which make for a pretty competitive picture: Alibaba has a finger in Swiggy rival Zomato, and Tencent is present in Ola, along with SoftBank, which is also an investor in Uber. In many cases, though, Tencent has followed in Naspers’s footsteps (like in Swiggy and Ibibo) and Alibaba in Softbank’s (both are investors in Snapdeal and Paytm Mall). The ambition clearly is to be the last person standing, with the winner taking it all.

This fortnight’s cover story by Forbes India’s Varsha Meghani is on Naspers’s internet investments, the reason for spinning them off and listing in Amsterdam, and how the Indian portfolio ties in with the global bets. For instance, Swiggy is Naspers’s Indian big hope in food delivery, along with Delivery Hero in Germany and iFood in Brazil. And if it has OLX in India in the classifieds, the South African investor also has stakes in the same space in the United States (with Letgo), Dubizzle in the United Arab Emirates and Avito in Russia. And exits have been profitable too; last year, Naspers sold its Flipkart holding after Walmart bought into the ecommerce major, making a neat killing (an internal rate of return of almost 30 percent) in the process; more recently in August, Naspers swapped its 43 percent stake in MakeMyTrip for 5.6 percent of an existing investor, Chinese travel operator Ctrip’s shares. Ctrip now owns 49 percent of MakeMyTrip.

Naspers, however, is no hurry to rake in the returns (it exited Flipkart only because Walmart swooped down). As Meghani writes: “Naspers isn’t a traditional VC. It does not operate a fund, it does not have external limited partners and has no exit horizon.” That makes it, in true Warren Buffett style, a long-term and patient investor. It helps that, as global chief executive Bob van Dijk told Meghani in an exclusive interview, that Naspers started relatively early in India in 2007 “when mobile internet connections were limited and terribly slow but the young population and quality of entrepreneurs excited Naspers”. In the past five years, Naspers has pumped $4 billion into India. For more on how those investments are faring, turn to ‘Long-Haul Rider’.

Since I did mention Buffett, you’re also going to encounter him in the Forbes’s list of 400 richest Americans. He’s at No 3, squeezed between Bill Gates and Mark Zuckerberg, with Jeff Bezos at pole position. Best,
Brian Carvalho
Editor, Forbes India
Email:Brian.Carvalho@nw18.com
Twitter id:@Brianc_Ed

Tweets by @forbes_india
4 Steps to becoming a more self-aware leader
Podcast: Can Naspers replicate its Tencent investment success in India?