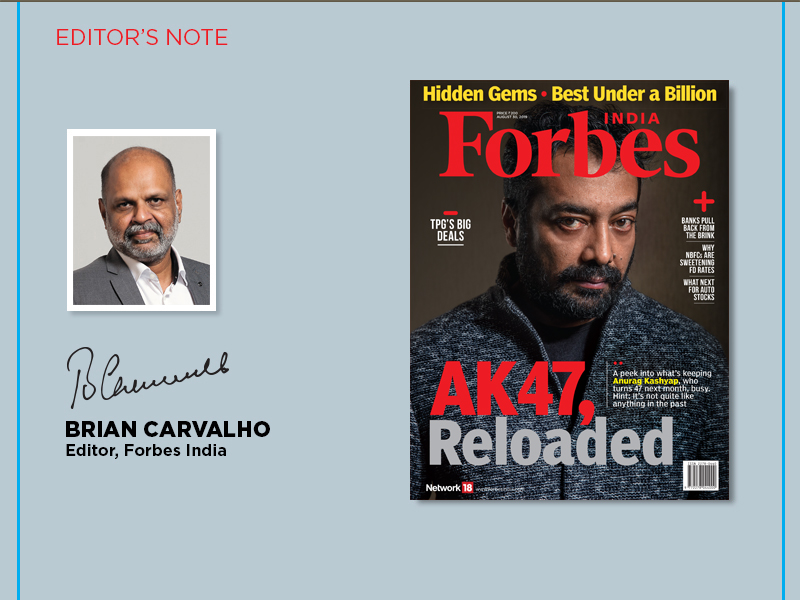 Filmmakers tend to go through volatile phases: A great film or two followed by an ordinary one; a personal passion project followed by outright crowd-pleasers; or an esoteric film that leaves critics confused followed by one that has them going gaga and the filmmaker wondering why.

If Martin Scorsese is best remembered for Taxi Driver and Raging Bull, it’s difficult to think of Gangs of New York in the same league. Or, if Steven Soderbergh earned critical acclaim for box office blockbusters like Erin Brockovich and Ocean’s Eleven, the abstruse Full Frontal—a film with real Hollywood characters—had more than a few unimpressed critics.

The journey of Anurag Kashyap—who graces the Forbes India cover this fortnight—has been a similar rollercoaster: Flops, hits, critical acclaim, unexpected acclaim, films that please, films that shock… look for a pattern and you just won’t find it.

It isn’t as if Kashyap plays to a pattern himself. All he wants to do is, in his words, “experiment”. The way he sees it, he will make movies that give him “creative joy” or “talk about things that nobody is talking about”. “I want to make people a little uncomfortable and laugh in discomfort,” Kashyap tells Forbes India’s Rajiv Singh in a no-holds-barred chat.

As Kashyap turns 47 (on September 10), he wants to keep doing what he has been doing for the past couple of decades: Write (with a pen), make and edit films. But he wants to run away from the formula, sometimes the one he may have pioneered (think Gangs of Wasseypur). And, unlike in the past, he is determined not to let failure and setbacks get to him. He’s seen both—right from his first film Paanch getting stuck with the censors, No Smoking being too obscure for most audiences and his passion mega-project Bombay Velvet sinking like a stone. He’ll continue to make films that he wants to make, not what audiences or producers want. And he’s willing to ruffle feathers doing that.

Don’t miss Singh’s story and interview, in which Kashyap talks about the various hats he’s wearing—a maker of web series for over-the-top (OTT) audiences (like the recently streamed Sacred Games 2); a filmmaker (he’s halfway through his next project, a ‘political’ film); a creative producer  (he stays away from the finances), an actor (dark roles in Tamil films), and a willing participant in ad commercials (the latest is an ad for Cadbury Perk). Look out for his answer on why he does the last two, although he doesn’t quite enjoy acting. Meanwhile, Kashyap also found time to set up, with friends, a blockchain-based streaming platform to bring foreign language films and documentaries to India.

Clearly, when he is making his own films, Kashyap is in no mood to compromise. The danger, of course, is of alienating audiences, but Kashyap is confident that he can defy the truism that a rolling stone gathers no moss.

Our other big story is our annual package on stones of another kind, perhaps how Kashyap was before Dev D and Gangs of Wasseypur—relatively anonymous but with dollops of potential. This edition of ‘Hidden Gems’—anchored once again by Forbes India’s Varsha Meghani—has nine companies in diverse sectors, from a port developer to a fashion-led hypermarket chain. Hope you see as much value in these gems as we did.

Tweets by @forbes_india
Why Anurag Kashyap is on the Forbes India cover
Video: The key events that led to India's independence