As the virus shifts to smaller towns and rural India, we bring stories of entrepreneurs who have quietly innovated to help the underserved, and of those who have built resilient businesses by serving beyond urban India 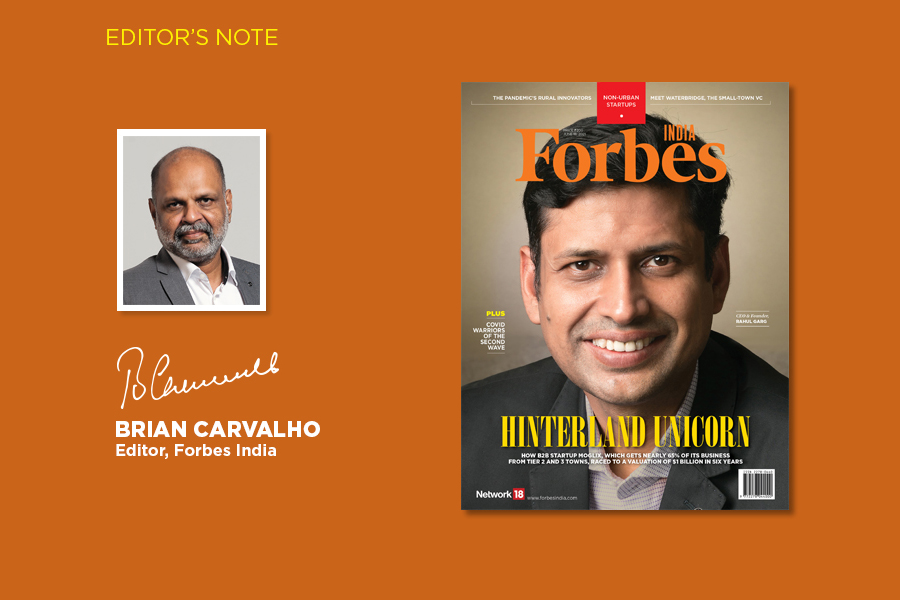 Entrepreneurship is not just about starting a business. It is about identifying problems and working on the best solutions to solve them by mustering all the financial, human and technological resources one can avail of.Look around you, and you don’t have to be Bill Gates to identify the problem staring us in the face: It’s the Covid-19 pandemic, and all the inadequacies that come with it. From accessing testing facilities, the right medication and quality health care (beds, doctors and nurses, oxygen, ventilators et al) to registering for a vaccine, nothing comes easy in a country where the health infrastructure has been pushed to the limit. And, more so in non-urban India, which is where Forbes India decided to shine a light this fortnight. The second wave has proved to be a tsunami in much of rural India, where awareness of the virus and its perils, and precautions against it, are minimal. Even as governments, non-profits and Samaritans of all hues pull out all stops to save lives and livelihoods, it is the entrepreneurs—those who build viable business models to solve problems—who have a key role to play. Many of the startups profiled in this special issue have tweaked their pre-Covid-19 business plans to be in a position to alleviate the stress on the health system and the people it is meant to protect. Consider, for instance, the Manipal-headquartered Blackfrog Technologies, which was founded in 2015 as an engineering consultancy. In the Covid-19 era, the startup has evolved into an innovative product developer by creating a solar-powered vaccine carrier that can be tracked thanks to a built-in Internet of Things device that can be worn as a backpack. This ensures not just vaccine accessibility in the hinterland at prescribed temperatures, but also minimum wastage and maintains efficacy of the jab. That’s just one of the innovations—unearthed by Naini Thaker and Naandika Tripathi—taking place quietly but surely in the smaller cities and towns of India. Don’t miss ‘On the Rural Frontline’ on page 29. It’s not often that a company wrapped up in Covid-19 crisis management goes on to become an investor favourite, and thereby worth a billion dollars. The Forbes India cover story this fortnight is on the six-year-old Moglix, which gets nearly 65 percent of its business from Tier II and III towns by helping over 500,000 small & medium-sized businesses procure industrial goods. While in the first wave, Moglix did its bit to supply PPE kits and N95 masks, during the devastating second wave, it manged to procure some 6,000 oxygen concentrators; the startup reckons it has touched half a million lives through these devices. Of course, there’s more to Moglix than Covid-19 relief, as Manu Balachandran writes in his fascinating deep dive on this B2B venture that has raised $220 million in funding so far. That’s on page 24. Sometimes, the germ of a business idea originates when trying to solve a personal problem. That’s what happened to Shreyans Mehta when his father suffered from a slipped disk in Rajasthan’s Jhalawar district in 2014 and couldn’t go to the hospital. That eventually led to Mehta, along with two friends, starting up MedCords a few years later. It is a cloud-based health management platform to provide an end-to-end medical ecosystem, from consultations to medications, in non-urban India. MedCords is a godsend in Covid-19 times, when timely delivery of medication and online diagnosis are the need of the hour. One such beneficiary of access via MedCords eventually became an angel investor in the startup. For more on that, turn to Divya Shekhar’s ‘Going the Last Mile’ on page 46. Best,
Brian Carvalho
Editor, Forbes India
Email: Brian.Carvalho@nw18.com
Twitter id: @Brianc_Ed

(This story appears in the 18 June, 2021 issue of Forbes India. You can buy our tablet version from Magzter.com. To visit our Archives, click here.)