Warmth on offer only for sustainable business models in funding winter

At $21.3 billion, 2022 has seen a drop in funding numbers for growth-stage startups by almost half. VC community's challenge now is to look for viable candidates that have a strong base of earnings and margins 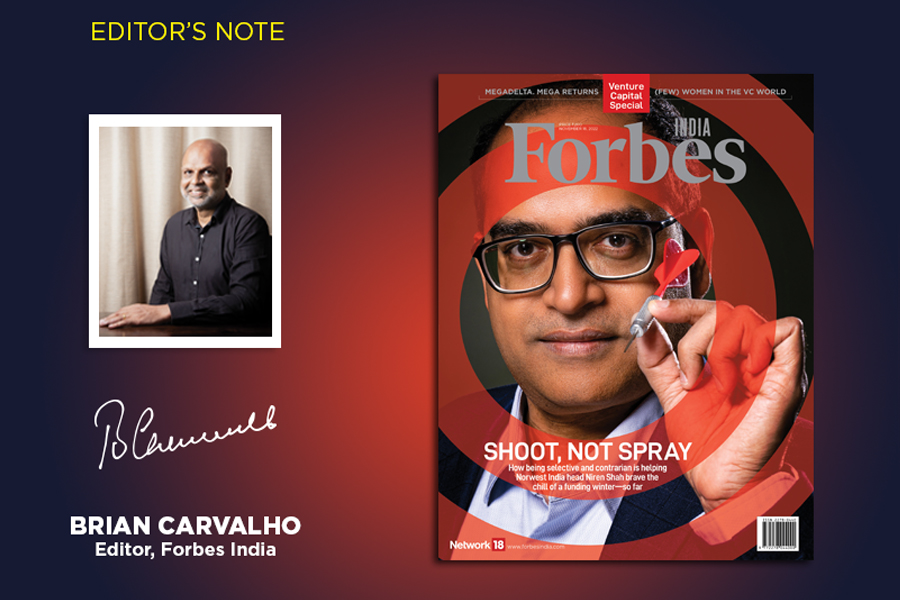 When phrases like ‘funding chill’ and ‘startup winter’ have been run ragged over the past few months, the timing of the Forbes India Special Issue on venture capital (VC) may appear counter-intuitive. After all, this has been a year in which overall funding—for early and growth-stage ventures—has plunged by almost half, from $41 billion in 2021 to $21.3 billion in the first nine months of the current year. And there are few signs of warmer climes, even as much of the country descends into wintertime, of the climatic kind.

A natural fallout of purse-strings tightening is startups gasping for breath, particularly those in growth mode and on a high cash-burn rate. The much-heralded unicorn club isn’t quite hibernating but there were fewer members joining the elite band of ventures valued at $1 billion and over—from 48 unicorns in 2021, India has had 21 till September 2022.

The numbers sourced from startup data firm Traxcn by Rajiv Singh—who has put together this fortnight’s VC package—are not all grim. Although late-stage funding has slumped, from $8.7 billion in this year’s first quarter to $1.4 billion in the July-September quarter, the silver lining hovers clear and bright over the early-stage pack. Till September, pre-seed, seed and Series A funding was holding up well, at $7 billion as against a peak of $8.7 billion in 2021.

The message here is clearly that funding may slow down but it won’t grind to a halt. Funders will become prudent, the funded will be cautious with capital and younger ventures with sustainable business models will attract the funding they deserve.

The challenge for the VC community is to discover the viable ones, and dodge the potential flameouts. Perhaps in heady times when liquidity is ample, such discretion may be critical; today, spray and pray is a sin, and VCs have gravitated from GMV and top line multiples to more pertinent metrics involving earnings and margins. Winter can be chilling, but more so if you are on thin ice.

The Forbes India cover story this fortnight is on a VC firm that appears to have kept a clear and level head during the dizzy and boisterous times. Evidence of that lies in the relatively trim portfolio of 22 companies, 16 of which are profitable and seven are unicorns. As Niren Shah, managing director and head of Norwest India, tells Singh, there’s little pressure to do “20 deals a year”; there have been years when the fund closes just two. “The magic lies in dodging bullets.”

One proof of the pudding, at least from a VC point of view, is exiting in style via an initial public offering (IPO). One of Norwest’s earliest post-IPO exits was from Persistent Systems in which it invested in 2006 and walked away with a cool 5x return four years later. Other notable post-IPO exits have been from RBL Bank (7.8x in six years) and Thyrocare (4x in eight years). For more on Norwest and Shah’s often finicky and contrarian funding blueprint, don’t miss ‘Dodging Bullets’.

There’s much more in store in this VC special. If early-stage funding is holding its own, the Singapore-headquartered Lighthouse Canton’s Indian arm may have played its part. With ticket sizes of between $1 million and $5 million, Lighthouse had made 25 investments since launch in 2020 till June this year. A few of its promising bets are in not-too-predictable sectors like tech-enabled health care diagnostics and used car leasing.

Tweets by @forbesindia
Photo of the Day: Darkness continues
Inside our venture capital special