Why Forbes India is doing a South celebrity special

This fortnight's three-cover celeb special is as much a celebration of the stars that glitter on Southern screens as it is a salutation of the OTT trend that has gripped much of India. 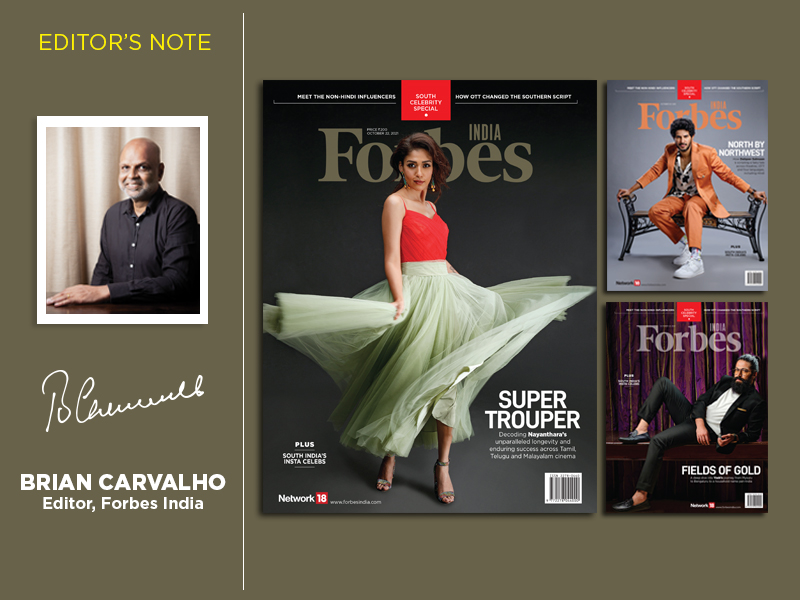 Every year, Forbes India takes a step away from its core of entrepreneurship, innovation and leadership to thrust onto centre stage the megastars, the icons of our generation. This year, we decided to do it a bit differently, and narrow down the spotlight on the four film industries down South—Telugu, Tamil, Malayalam and Kannada. The first reason for doing so is a legacy one, although it may have limited significance in today’s reality: As Sreedhar Pillai, a columnist who closely tracks South Indian films, writes: “The Southern states traditionally have the highest theatre-going audiences, with the largest number of single screens in the country.”

Covid-19 may have changed some of that and, in the process, the way films are made and sold. As theatres remained shut in most of the country’s major markets, Over the Top or OTT, which allows films to be streamed into homes via an internet connection, became a way life—for producers and filmmakers, and consumers. Not in all markets, though. As Pillai points out in ‘OTT Revolution: A Boon for Filmmakers’: “OTT has become a way of life for producers of Tamil and Malayalam films, while Telugu and Kannada are still rooted in the theatrical business.”

This fortnight’s three-cover celeb special is as much a celebration of the stars that glitter on Southern screens as it is a salutation of the OTT trend that has gripped much of India. And it also tells us something that many of us from a distance tend to mistakenly assume: That, although many of the superstars work across languages and regions, the South is not one homogenous mass of movies, makers and viewers. While the Telugu industry, for instance, relies heavily on big-budget theatrical releases with more predictable storylines and protagonists (read male), Malayalam filmmakers have maximised the power of OTT with plots steeped in real life and cinematography that captures the splendour of the soil.

Like in most sectors that have been digitally transformed, there may be no going back once the pandemic ebbs. As filmmaker and writer Anjali Menon writes in her column, ‘Culture of Creativity Helps Stars Take Risks’, “People making films will have more clarity about who is their intended audience and how they want to screen it. The profile of the audience will be more defined into a theatrical audience and an OTT audience.”

Menon points to a much-needed consequence of the OTT revolution: The focus on gender inclusivity and sensitivity, with OTT projects building in contracts with provisions for implementing laws on sexual harassment of women in the workplace.

An icon who is easily the best representation of the changing times in a male-dominated industry is Nayanthara. If she has earned the title of ‘Lady Superstar’ it is because she is able to get people to the movies just on her name—a preserve for long of, if you will, the ‘male superstar’. In the first of our cover stories, Divya Shekhar delves deep into the reasons for Nayanthara’s unparalleled longevity and superstardom for close to two decades now. ‘Still I Rise’ is a must-read.

Also essential reads are the profiles that grace the other two covers—Manu Balachandran’s deep dive into Dulquer Salmaan’s ambition to rule the roost in four industries (add Hindi to Malayalam, Tamil and Telugu) and two platforms (OTT and big screen); and Naini Thaker’s furious pursuit of the trail of Yash from Mysuru to Bengaluru to a household name pan-India. Clearly, at the intersection at which stories told in multiple languages and from diverse locales meet is firmly planted the milestone of OTT.

Tweets by @forbesindia
If we reach playoffs consistently, we will win the IPL one day: RCB's Rajesh Menon
Startup Fridays Ep 25: In India, a light bulb went off in my head, and I knew I wanted to invest in founders there - Brendan Rogers