Is telemedicine here to stay? 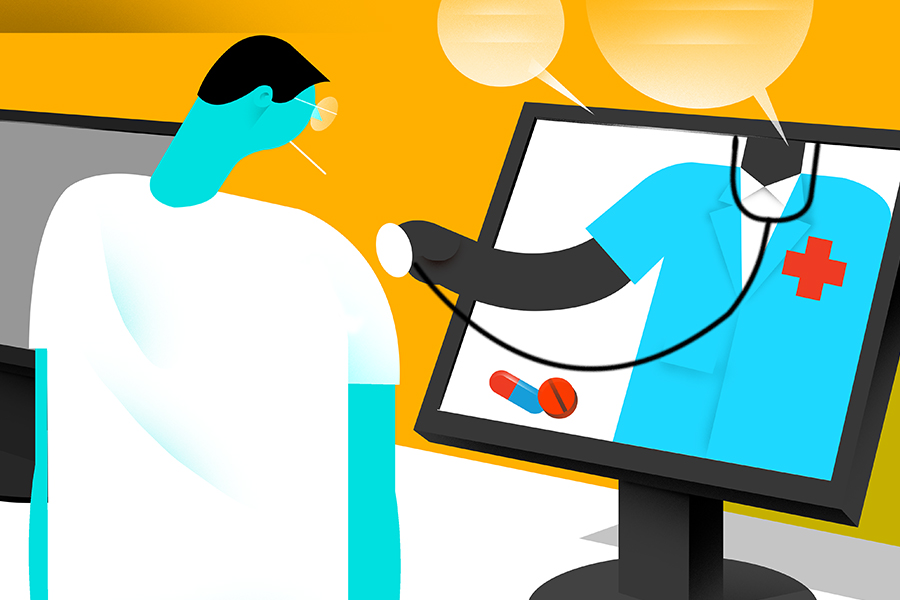 India’s fledgling telemedicine industry has received a much-needed shot in the arm, thanks to the Covid-19 pandemic.

With the virus already infecting over 1,965 people and killing 50 people in India at the time of writing this story, and a three-week national lockdown being declared to contain its spread, reaching out for medical help has been restricted. This is where telemedicine has emerged as a saviour, including in the diagnosis of Covid-19.

As defined by the Indian government, telemedicine is the delivery of health care services remotely using information and communication techniques including video and audio for the diagnosis, treatment, and prevention of disease and injuries. “And it is here to stay now,” says Meena Ganesh, serial entrepreneur and the CEO of Portea Medical, a home health care service provider. “We are at an inflection point and we will certainly see a big industry shift in the coming years.” Portea is among the few health care providers who have seen a 50 percent spike in teleconsulting ever since the Covid-19 crisis broke out. In March, the company also launched Cobot-19, an information and awareness chatbot, which has already notched up over 7.5 lakh users.

mfine, an AI-Powered online doctor consultation app, too has seen a rise in the number of people logging in. “Since the outbreak began in March, we have seen a 25 percent jump every week in the number of new users,” says Prasad Kompalli, co-founder and CEO. “By the end of April, we are likely to see a two-and-a-half times surge in the number of consultations. In the past 40 days, we have added about 100 new hospitals.” The company has also tied up with Thyrocare to provide Covid-19 testing for its users.

Much of the uptick in teleconsultations and telemedicine is due to the national lockdown imposed by PM Narendra Modi from March 25. As a result, citizens are only allowed to step out of homes for essential services. Besides, hospitals have been discouraging patients from visiting the outpatient departments (OPD) to avert the spread of the virus. On March 23, India’s premier All India Institute of Medical Sciences (AIIMS) shut its OPD to contain the outbreak.

“We have seen an explosion in the number of people who have begun to use telemedicine,” says Shashank ND, the CEO and co-founder of Practo Technologies. “While the sector had been growing steadily, the lockdown has led to an exponential rise in teleconsultations and telemedicine. It has also helped that the government has, for the first time, laid down guidelines on telemedicine.”

Over the past week, Practo saw a 30 percent increase in the number of online queries with 50 percent of them being about Covid-19. That led the company to increase the number of doctors on the platform by over 50 percent and has put in place a dedicated team to handle Covid-19 cases. The company already has two crore monthly users.

Until March 25, India did not have any legislation on the practice of telemedicine. That changed when the health ministry and Niti Aayog, the government’s premier think tank, jointly announced guidelines for medical practitioners to ramp up telemedicine services in the fight against Covid-19. Under the new norms, registered medical practitioners can use all channels of communication, including voice, video, and text, for diagnosis. That means even WhatsApp, Facebook Messenger or mobile health apps can facilitate consultation.

The move assumes significance, especially since health workers and doctors are among the most vulnerable to the disease.

In March, 76 such workers at the Sree Chitra Tirunal Institute of Medical Sciences and Technology in Thiruvananthapuram were asked to go on quarantine after they came in contact with a doctor who had tested positive for the disease. The new guidelines also allow general health conditions like fever, basic cough and a cold, mild rise in sugar, cholesterol, thyroid, which may not require doctors to see patients in-person, to be carried out through telemedicine.

In addition, follow-ups for chronic illnesses like diabetes and hypertension, too, can be done through telemedicine.

“Disasters and pandemics pose unique challenges to health care. Though telemedicine will not solve them all, it is well suited for scenarios in which medical practitioners can evaluate and manage patients,” the guidelines add. “A telemedicine visit can be conducted without exposing staff to viruses/infections in the times of such outbreaks. Telemedicine practice can prevent the transmission of infectious diseases, reducing the risks to both health care workers and patients.”

“There is a growing acceptance towards telemedicine from both the patients and doctors alike,” adds Kompalli. “Using artificial intelligence, doctors are finding services to be more productive since AI can collect the information, images and decipher them.” mfine had developed a tool for ₹100 to detect vulnerability to the Coronavirus and check symptoms on the app. “So far 5,000 people have used it, and we have been able to use the data to identify user groups and geographical regions where symptoms similar to Covid-19 are seen.” Meanwhile, others such as the Apollo chain of hospitals had come out with an online self-assessment test that can help people perform a preliminary test at home for COVID-19 for free.

In 2019, a study by McKinsey Global stated that India could save $10 billion if telemedicine replaced between 30 percent and 40 percent of in-person outpatient consultations. “This is a watershed moment for the industry and health care in India, but unfortunately it is coming against the backdrop of Covid-19,” adds Shashank of Practo. “We are seeing between 100 percent and 200 percent growth in consultations.”

There is a good reason for the interest in telemedicine too. India is home to over 500 million smartphone users and nearly 650 million broadband subscribers. That means, just like ecommerce and hyperlocal delivery companies caught the fancy of consumers, so has virtual medical consultation.

“What telemedicine can do is bring about a behavioural change,” says Ganesh of Portea. “Just like online ordering is here to stay, we are certain telemedicine will stay too. Barriers have disappeared and hospitals can begin to focus on treatments.”

The Narendra Modi government is looking to raise expenditure on public health services to 2.5 percent of the country’s GDP by 2025. It assumes significance particularly in the backdrop of the Covid-19 crisis, which can put severe pressure on India’s health infrastructure.

India’s telemedicine industry is expected to grow to $32 million in 2020, according to the India Brand Equity Foundation, a trust established by the department of commerce, while a report published by Global Market Insights in March 2019 reckons that the telemedicine market was valued at over $38.3 billion in 2018 and is expected to grow at over 19 percent CAGR between 2019 and 2025.

Meanwhile, will the interest in telemedicine likely decline, once India lifts its lockdown? “People will begin to realise the benefits that telemedicine provides,” says Kompalli of mfine. “Of course, there might be a decline once things settle. But we will see the emergence of a new channel that will be a combination of physical and online medical services.” Others agree too. “The lockdown can help improve the trust that people have on telemedicine,” says Shashank of Practo. “There is convenience and easy access to doctors which will help the industry make huge leaps.”

Tweets by @forbes_india
Digesting the shocks: how supply chains are adapting to the COVID-19 lockdowns
Two veteran CEOs risk $1.8 billion on an app. In a pandemic.