No human is limited: Eliud Kipchoge

The running legend from Kenya on why he attempted to be the first human to run a marathon under 2 hours, and how he achieved it 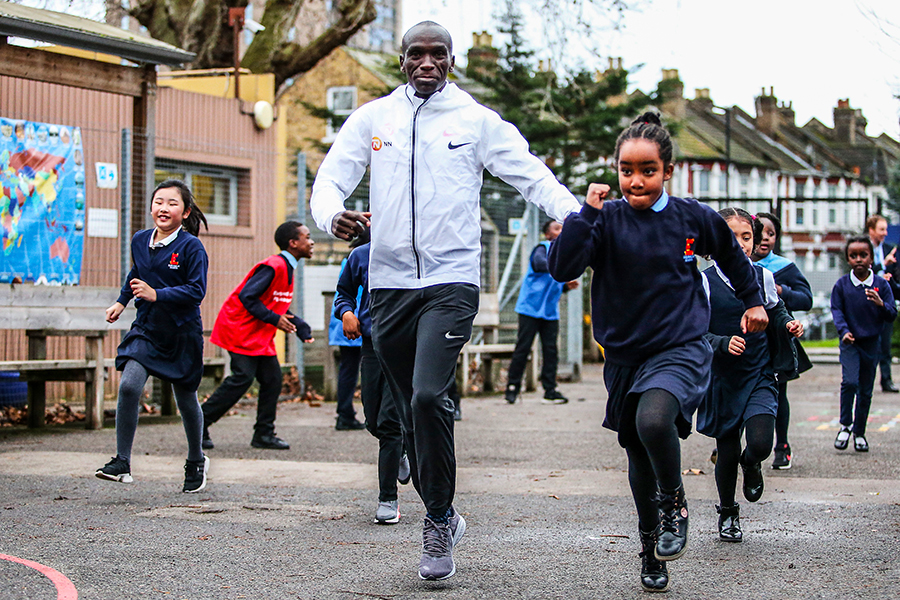 On a misty morning in Vienna in October 2019, Kenyan long-distance runner Eliud Kipchoge struck down the finishing tape as well as “the last barrier of modern athletics” by running the marathon distance of 26.2 miles in under 2 hours. Kipchoge’s timing of 1:59:40 isn’t officially recognised as a world record as the conditions—a straight and even track, a battery of world-class pace-setters and special shoes, among others—were carefully chosen to propel him towards it. But it takes nothing away from a feat that transcends the realm of mere statistics and accomplishes what was once considered invincible: No athlete since Roger Bannister in 1954, a British medical student who became the first ever to run a mile in under 4 minutes, had upended notions of human endurance as Kipchoge.

The 35-year-old, a gold medallist at the 2016 Olympics, has now been roped in as the ambassador for the Sunfeast India Run As One initiative, a virtual movement that is raising funds for livelihoods affected by Covid-19. In an email interaction with Forbes India from London, where he is housed in a bio-bubble for the marathon on October 4, Kipchoge discusses his running philosophy and why the initiative is close to his heart. Edited excerpts: Q. How did you start running? What led you to take it up professionally?
I had many inspiring athletes around me while growing up in my home country, Kenya. And my neighbour happened to be Patrick Sang, the Olympic medallist, and he took up coaching me when I was 16. Running makes me happy. It gives me focus and hope in life. Also, I am really good at it!  Q. After winning two Olympic medals in 2004 and 2008, you failed to make it to the team for the 2012 Olympics, which caused you to switch to marathon. What was going through your mind when you made the decision?
It was my time to go to marathons and I made my mind up for the distance.  Q. How do you prepare to run a marathon? What do you do to build up endurance?
Around four months before a marathon, we start with a gym programme and easy long runs to build a strong foundation. During those months, we build up kilometres to around 200-220 per week. We train twice a day, six days a week. I stay focussed on my training and that gives me the confidence to run the distance. Q. Why did you choose to give the 2-hour mark a chase? Why was breaking the barrier so important to you?
Jos Hermens, my manager, had a dream and believed the 2-hour mark could be broken in our lifetime. He inspired me and I wanted to inspire the world that no human is limited. My mind was clear, and I just knew since the start of the race that I was going to do it. It was about inspiring people more than breaking a barrier.  Q. What are your thoughts about the criticism that the record was engineered by preparing conditions ideal for the run?
It does not bother me. Our goal was to run 1:59 and we did it. Technology is a part of running but it is my legs that are still doing the running and not the shoes. Truth is we set a record. Our aim was to tell the world that no human is limited. Be the best you can and try to break your boundaries.  Q. What is more precious to you--the Olympic medals or the sub-2 hour run?
I cannot make a choice between the two. It is difficult to compare, because the 1:59 project was also about breaking limits.  Q. Now that you've achieved what no human being has achieved before, what else remains to be accomplished?
It’s my dream to make this world a running world. I love running and I love being part of our NN Running Team. We keep motivating each other, learn from each other and set new horizons and new goals. I have been preparing for the London marathon scheduled for October and I will give my best.

Q. From a farmer boy, you've now become the world's most accomplished long-distance runner. What are some of the key lessons you have learnt on the journey?
Stay humble, be disciplined, and believe in yourself. No human is limited. I wear a wristband that reads ‘no human is limited’. I believe the mind is what drives a human being. If you have a strong belief that you can do something, your mind will help you make it happen.

Q. You are an ambassador for the Sunfeast India Run As One initiative. What does this initiative mean to you?
I have had the opportunity to witness the warmth and hospitality of India when I won the Airtel Delhi Half Marathon in 2016. India is very close to my heart and it is disheartening to see how the Covid-19 pandemic has disrupted so many lives.  The beauty of this initiative is that by a simple act of registering for Rs 100, Rs 600 and Rs 2,500 upwards, you are directly contributing and impacting a person’s livelihood. It is an effective platform for the global community to come together and spread happiness. Sunfeast India Run As One has already raised over Rs 1.18 crore, and it’s never too late to help someone. I would like to urge you to join the movement. Individuals can join the movement by registering on sunfeastindiarunasone.procam.in. till September 30