Covid-19 Warriors: A social activist and psychologist helping victims of trafficking, even in lockdown

Kolkata-based Uma Chatterjee, the founder of a non-profit called Sanjog, is providing survivors support with WhatsApp groups and Zoom calls—but says the voices in her head will haunt her until she can conduct field visits and face-to-face sessions 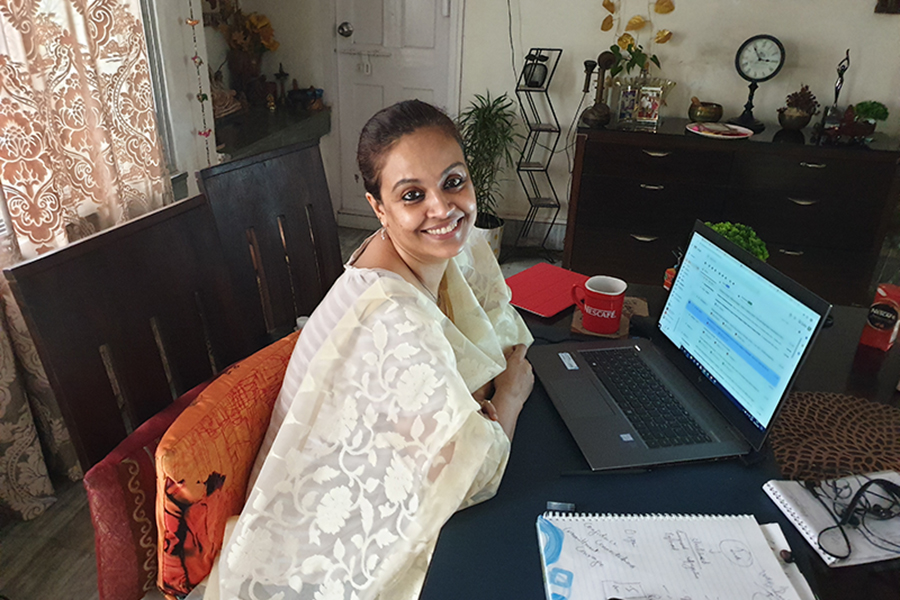 Uma Chatterjee is trying to keep up conversations and morale among survivors of gender-based violence and trafficking, among others, providing a virtual safe space to share stories and feelings. In a pre-Covid-19 world, Uma Chatterjee would be meeting survivors of domestic violence, sexual exploitation and human trafficking at group meetings or counselling sessions. “There would be six to eight meetings a month among group leaders; support groups would come together at other times,” says Chatterjee, who founded Sanjog—a Kolkata-based non-profit organisation that works in the key areas of gender-based violence, sexual violence, migration, and trafficking of children and women—in 2012. For survivors of sexual and domestic violence, it is often the assurance of, and support from, meetings such as these that help them cope with the memories of a violent past, or the travails of the present. Psychological counselling sessions, advice and guidance, or even the simple knowledge that their voices are being heard, are important tools in their survival and rehabilitation.

But things began to change with the onset of the Covid-19 pandemic, as lockdowns severely restricted the movement of social workers, support groups and the survivors themselves. Physical meetings became an impossibility. “By the end of March, we wanted to ensure that we have a WhatsApp group with 200 survivors on it,” says Chatterjee, who focussed her attention on keeping up conservations, and morale. “It is not the same as conducting sessions that are face to face, but they know that there is a space where they can share their thoughts.” “We started posting voice recordings and short videos about how we were feeling,” says Chatterjee. “For example, I posted about how anxious I was feeling about my older parents getting infected; how angry my daughter was that she could not meet her friends.” One trafficking survivor on the group said, “How is being locked in my home any different from the time when I was locked up and trafficked?” Being confined in a small space had begun to unearth, what Chatterjee calls, “body memories” among survivors. That is when the group started talking about physiological memories—for instance, their hearts beating faster, and their palms becoming sweaty—that brought back the fear and trauma of the past. “It is not always about how our mind remembers the trauma, but how our body remembers it,” says Chatterjee. “And at physical meetings there is a lot of non-verbal communication; sometimes you don’t even need to say anything… just a tear, the touch of the hand is enough to convey what you are trying to say.” Those who had mobile phones with cameras were then encouraged to photograph themselves in a physical space that made them feel calm, and at peace. “One girl sits next to a pond, where she always cries when she remembers the time when she was raped. But it is also the same place that brings her peace,” says Chatterjee. “Another lies down on the grass and looks at the sky, while her goats and cows graze nearby.” As Sanjog was coming to terms with these new mechanisms to cope with the lockdowns, West Bengal was hit by the devastating impact of the Super Cyclone Amphan, which made landfall on May 20. The widespread damage to cell phone towers have now made even mobile connectivity an issue in vast parts of rural West Bengal. Being confined to her home—she is in a containment zone—means Chatterjee cannot meet any of these survivors in person. Although she is in touch with the Sanjog team through Zoom calls and phone conversations, her mind is not at peace. “I think I am very privileged to have a separate space to work from at home, and I do live in a home that is very quiet,” she says. “But I listen to the voices of survivors when I speak to them over the phone, and I can hear the noises that are ringing in their minds. Their voices of anxiety are very loud. I have become disconnected from the field in the aftermath of Amphan, and I can’t just go to the field and gather a meeting. But I can only hope that I can continue to provide them with the compassion and insights that they need.” This is part of a daily series on how Covid-19 has upended the lives of essential workers across the country. Read more here