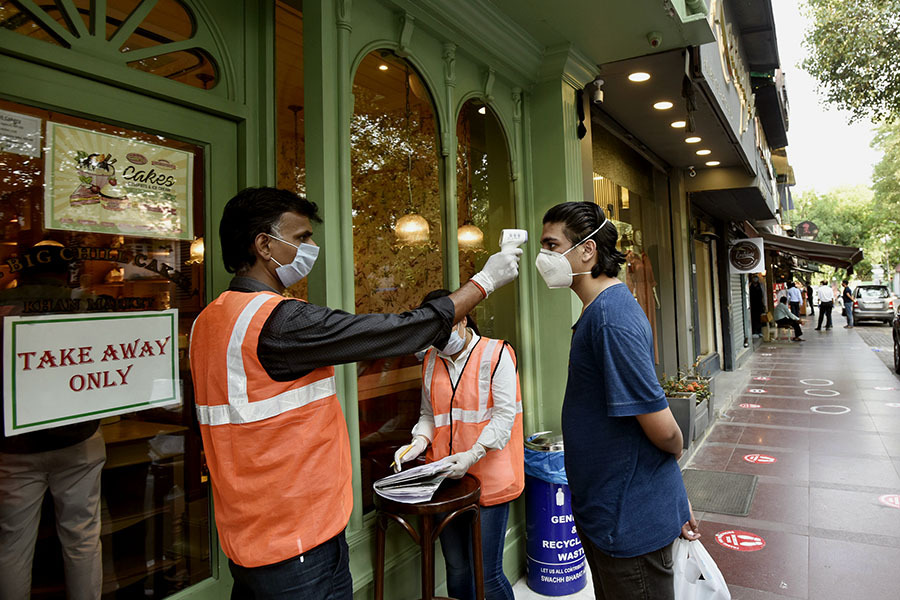 Restaurants are taking a hard look at their fixed costs as they prepare to operate at a lower capacity in the post-Covid world. Image: Sanchit Khanna / Hindustan Times via Getty Images

In early June, Twitter was abuzz with news that at least 10 restaurants in Delhi’s tony Khan Market planned to shut shop. The restaurants, which operate at slender margins at the best of times, complained that landlords were unwilling to lower rentals. With lower footfalls and takeaway orders at a fraction of earlier numbers, the business was unviable. Customers who had planned to visit Café Turtle and Khan Chacha’s once they reopened were disappointed. This tug of war points to the delicate reckoning that a number of businesses face. With demand numbers still uncertain, they are taking a hard look at their fixed costs. Most are grappling with the new reality of operating at a far lower capacity on account of lower demand in the post-Covid world. “Airlines are flying at about 30 percent of their capacity at 55 percent load factors,” tweeted Sanjiv Kapoor, former chief commercial officer at Vistara. “Do the math. Less than 20 percent of pre-Covid demand is back,” he said. Fixed costs for InterGlobe Aviation and SpiceJet were 91 and 92 percent of revenues respectively in the last 12 months. Airlines, restaurants, malls, cinemas and hotels have already gotten rid of the low hanging fruit—employee costs. Salaries have been cut and some staff laid off. The next stage promises to be messier as they look to reduce a larger component of fixed costs. For a restaurant and stores in malls, it means negotiating with landlords to bring down rentals. Airlines must decide whether to return planes to lessors or negotiate with airport operators to reduce parking fees. “Several businesses are looking to invoke force majeure in re-negotiating their terms. This is likely to attract multiple litigation in various sectors in the next few months,” says Zulfiquar Memon, managing partner at MZM Legal. For now, markets continue to price these companies at levels that are at a discount to their pre-Covid levels but not at prices that would reflect reduced demand for several quarters. This phase of opening up presents the trickiest valuation puzzle for analysts. They must price in a recovery in demand that may or may not happen. In the absence of clear demand numbers, investors have taken some money off the table. If demand doesn’t recover, these companies may prove to be expensive even at the lower prices. Take airlines for instance. InterGlobe Aviation is down by 47 percent from its February peak, but passenger loads are barely 20 percent of pre-Covid times. So even if prices have fallen, its multiple has expanded as both revenues and profitability are expected to decline significantly this fiscal. SpiceJet is down by 43 percent. Phoenix Mills, which is locked in rental negotiations with tenants, is cheaper by 31 percent. Indian Hotels is down by 38 percent. It would take several months for more accurate forecasts to emerge.

Tweets by @forbesindia
Lean hospitals? How lessons from manufacturing can improve healthcare
Covid-19 Warriors: A social activist and psychologist helping victims of trafficking, even in lockdown