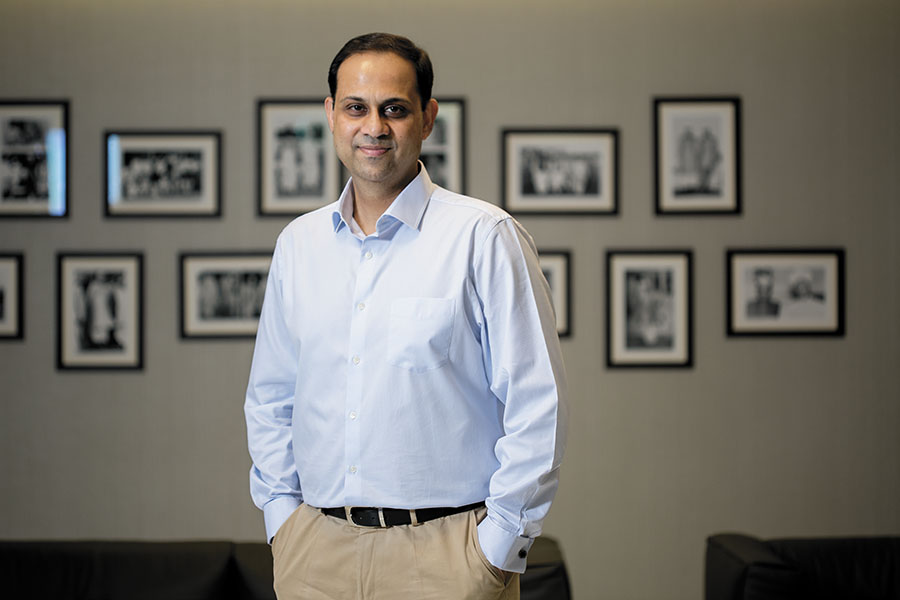 Listed Bajaj Finance is the crown jewel of what is now a financial conglomerate, accounting for 40 percent of its revenue and catering to a swathe of customers from just below middle class all the way up to high-net-worth individuals. It’s a leader in financing consumer products, funding one out of every four flat-screen TV sets in the country. It also makes loans for discretionary spending and even for splurges on, for example, luxury watches, stem-cell storage or cosmetic surgery. “Consumer products financing really brought them into the limelight and propped them up as a different player with a niche product,” says Kajal Gandhi, banking analyst at Mumbai’s ICICIdirect.com. “These are short-duration loans. The churn is faster, and they completely replenish the loan book every year.”

The all-out attempt to woo the consumer has helped build a base of 85 million customers, with 10 million being added each year. But it isn’t without challenges. “When you sell a sporty motorcycle, the customer can touch the petrol tank, kick the tyres and hear the whir of the engine,” explains the 48-year-old Bajaj. “There’s an appeal on the product for which the person is willing to pay a premium and take it home. That’s not the case with loans and insurance.”

That’s why Bajaj has tied up with 40,000 retailers selling everything from modular kitchens and mattresses to mobile phones. The financing options bring in fresh buyers. Take G Thirulogachandar, 47, who recently bought a $700, large-screen Haier LED TV at a store in Chennai. “I wouldn’t have been able to buy it with one single payment. It helps that the payments are spread over eight months.” He runs a small business and got 0 percent financing from Bajaj.

Bajaj Finance has also allied with Kishore Biyani’s Future Group, a top retailer, to convert any purchase over $75 into monthly installments. “He [Bajaj] is more about doing rather than talking,” says Biyani. “This company is very refreshing because it’s simple, serious and data-driven.” 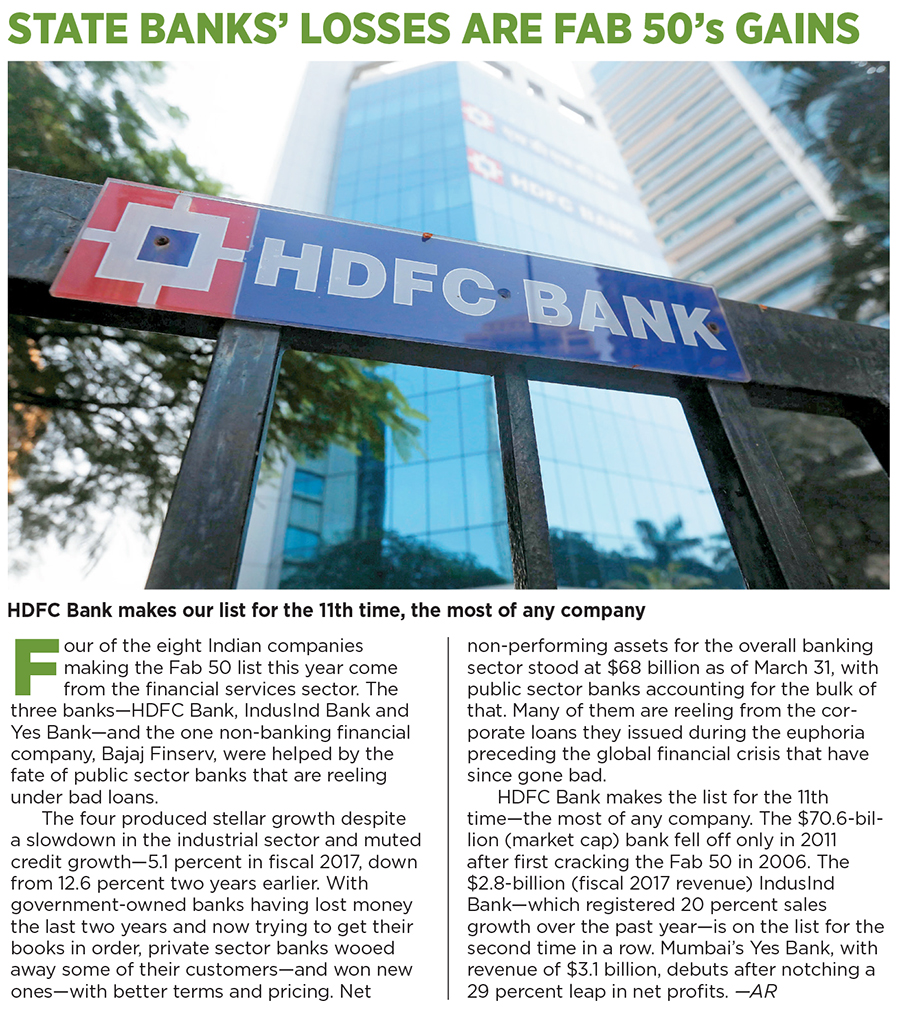 Indeed, data analytics has helped Bajaj track millions of customers while keeping bad loans in check. The amount of its non-performing assets is among the lowest of India’s non-banking finance companies. “They [Bajaj] have all the systems and processes in place, which is why they can pick and choose customers,” says Alpesh Mehta, research analyst at Motilal Oswal. “They can take an intelligent credit risk on any customer, whether he is in a tier 2 or tier 3 city. It’s very difficult to replicate their analytics.”
Bajaj Finance boasts $10.7 billion in assets under management, and Motilal Oswal projects this figure to more than double over the next three or four years, buoyed by selling more of its products to each customer, winning more customers and expanding into new regions.

In insurance, Bajaj Finserv is not a leader but it’s gaining ground. In the past year, it issued 10 million policies for health care, motor, marine and crop insurance, and it’s one of the most profitable players in the general insurance sector. It ranked No 1 in the private life insurance sector for the past year in terms of number of lives insured, according to the insurance regulatory agency Irda. Bajaj operates two insurance segments: General insurance through Bajaj Allianz General Insurance and life insurance through Bajaj Allianz Life Insurance. The German insurer Alli­anz holds 26 percent in the two entities; Bajaj Finserv owns the rest.

Bajaj Finance also enjoys synergy with Bajaj Auto. It finances one out of three motorcycles and one out of five three-wheelers sold by Bajaj Auto in India, and buyers get the option of insuring their new wheels with Bajaj Allianz General Insurance. But this is only a small part of Bajaj Finance’s business.

Born into a storied business family, Sanjiv Bajaj is the great-grandson of founder Jamnalal Bajaj and the second son of billionaire and Bajaj Group Chairman Rahul Bajaj. He studied at a Catholic convent school run by Swiss missionaries. “It was a fairly simple, middle-class experience,” he says, noting that the students came from all socioeconomic groups. “It created a very solid foundation.”

He went on to get a mechanical-engineering degree from the government engineering college in Pune. While there, the lanky, 6-foot-3 Bajaj played basketball for the varsity team. After a brief stint at Bajaj Auto, he earned a master’s in manufacturing systems from the University of Warwick in the UK and an MBA from Harvard. For ten years, until 2007, he took on a variety of roles at Bajaj Auto, ranging from controlling costs on the shop floor to managing investments and revving up exports.

Then the auto and financial-services units were split and Bajaj took charge of the latter. The year he took over, Bajaj Finserv reported a $8 million loss. Bajaj wasn’t deterred: “Luckily, we had all the products within the three companies to cater to the entire financial life cycle of a person.” And he could lean on his uncle Nanoo Pamnani, a career Citibanker who mentored him and now serves as Bajaj Finserv’s vice ­chairman; Rahul is chairman.

Early on, Bajaj decided that while growth was important, it wouldn’t come at the cost of profitability. For instance, when the company was considering selling insurance through large banks, it decided against it because the relationships were costly. It focussed instead on smaller banks. Similarly, it began issuing infrastructure loans in 2011 but stopped after 18 months. “These loans help you add to your books quickly but could also prove to be a distraction,” he says.

Bajaj also plays an active role in human resources, getting involved in appraisals, promotions and job rotations. “The challenge in any organisation is in stagnation of ideas or poor execution, both of which comes back to people,” he says. His job is cut out for him: “How do we align and keep our top 500 people motivated and fully equipped and accountable?”

In a crowded industry, Bajaj Finserv faces off with many companies across several segments, from Chennai’s Shriram Group to Fab 50 perennial HDFC Bank and Mumbai’s Capital First. So it tries to separate itself from the pack with technology, constantly seeking out fresh ideas across the globe.

In April, Bajaj was in Silicon Valley meeting with executives from Amazon, Microsoft and Salesforce as well as 40 startups. “There’s so much change and innovation happening,” he says. “We pick up what’s relevant and use the technology that’s applicable to us.”

While dad Rahul acts as “a check and balance”, the son says he enjoys a free hand in running the company. “We have a very productive and highly accountable engagement,” says Bajaj, who lives with his wife and two children in the same house as his father. The two brothers sit on each other’s boards; there’s also a younger sister who’s not involved in the group. While work takes up a chunk of his time, Bajaj has not lost his sporty bent—taking time to swim, walk or play tennis and basketball. Yogic breathing also gets its slot a few times a week.

But the business vision is always clear and present. “We have grown very well, but we are still very small,” observes Bajaj. “I see the opportunity for us to be the financial services partner for a large part of India.”

Tweets by @forbesindia
Zomato claims 'profit'
Byju's: Swipe and learn from this near-unicorn