Uber is also the latest hit for Benchmark, a firm whose record makes other VC shops look overhyped and overstaffed 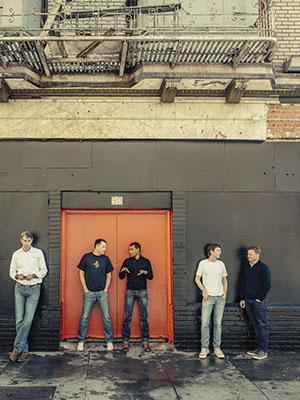 The first topic of conversation at one of Silicon Valley’s most exclusive dinners is usually the table. Made of a deep-brown walnut, the table isn’t oval or square, but a distinctive asymmetrical rounded triangle. It’s been custom-built for its hosts, Benchmark Capital, which uses it for partnership lunches and semi-secret weekly dinners with select members of the Valley’s brain trust. The events are exclusive salons that tackle everything from the future of mobile computing to the features that drive Twitter’s success. “The table’s dimensions make it perfect for seven people to all speak together,” says Bill Gurley, the firm’s longest-serving active partner.

Giving everyone not just a voice but an equal voice is Benchmark’s stock-in-trade. Unlike most of its rivals, Benchmark is deliberately egalitarian. There are no junior or senior partners, only partners, and no one plays a CEO-like role. The firm’s winnings—2.5 percent in management fees and 30 percent of the upside—are divided equally. At a time when buzzy firms like Andreessen Horowitz or Google Ventures lard up their payrolls with marketers, PR handlers, recruiters and in-house designers, Benchmark is decidedly minimalist. There’s only a small staff to support the five partners. Its website is a spartan, static page with exactly one hyperlink, which directs visitors to the Twitter feeds of its portfolio companies. And the firm has eschewed the temptation to raise ever larger funds, keeping its own below $500 million. “We’re more of a jazz band than a marching band,” says partner Peter Fenton (No 2 on the Midas List).

Benchmark’s approach may be contrarian, but it has worked beautifully. Over the 20 years of its existence, the partnership has backed many of the biggest names of the internet era, such as Dropbox, eBay, Instagram, Yelp and Zillow. The last few years have proven especially lucrative. A $32 million bet on Twitter is now worth $2.2 billion. A $21 million Snapchat investment, led by partner Mitch Lasky (No 70 on the list), is held at $2 billion. Benchmark’s reward for being one of the first VCs to back Uber is an estimated $7 billion stake in the car-hailing behemoth. On a single day in December, Fenton celebrated IPOs for two portfolio companies: New Relic and Hortonworks.

Benchmark’s eight funds have paid out $22.6 billion to investors over the years. Its backers received a 1,000 percent gross gain over the past decade. That beats out most billion-dollar funds raised by larger firms. It’s no surprise that some of its most successful rivals say Benchmark is the firm they admire—and fear—the most. “They benefit from being extremely focussed,” says Jim Goetz (No 1 on the Midas List) of Sequoia Capital, which has offices and funds in India, Israel and China. “They’ve taken a different view on the world.”

Its size forced Benchmark to be scrappy, hungry—and fast. A year after bonding with Benchmark partner Matt Cohler (No 63 on Midas) in Davos in 2010, Domo CEO Josh James pitched him on his new startup idea. Cohler asked him to present to the whole partnership the next morning. James wasn’t just any entrepreneur—he’d sold his last company, Omniture, to Adobe for $1.8 billion. “It felt like a Hollywood movie,” says James. “Cohler said, ‘We don’t want to invest $10 million. That’s monkeying around. We won’t give you $20 million, that’s how big we think this is. You are Josh Effing James, and you need $30 million, and we want to do this right now’.” They inked a term sheet within 30 minutes after the meeting and 17 days later, the cash was in his account.

Benchmark netted one of its biggest fish, Uber, with good-humored antics that carried a not-so-subtle message to CEO Travis Kalanick: We know you’re talking to rivals, but we know the app better. As Cohler and Gurley prepared for a pitch meeting, Cohler spotted an Uber car waiting for Kalanick at a venture firm nearby on Sand Hill Road. “Matt just called the car away, and Travis had to run the whole way over,” Gurley says. “He comes in 20 minutes later and sweaty. That night we sent him tennis shoes.”

Benchmark focuses almost exclusively on a company’s first or second institutional round of funding and likes to take the biggest stake of any outside investor plus a board seat. Because of its reputation, about 60 percent of Benchmark’s deals come from referrals or repeat founders, says Gurley (No 9 on Midas). A reliable proving ground for those founders has been Benchmark’s entrepreneur-in-residence programme, which counts the likes of Nextdoor CEO Nirav Tolia, New Relic CEO Lew Cirne and SurveyMonkey CEO Dave Goldberg as alumni.

Benchmark wasn’t always true to its credo. During the dot-com bubble, it made a bid to go global, opening offices in London and Tel Aviv. Though the results were solid, the firm dynamics grew increasingly strained. Gurley missed out on Skype by trying to hand the investment off to his European partners, and the different offices struggled to stay on the same page without anyone serving in a CEO role. By 2007, they started scrapping the experiment.

Being small can have its downsides: Some major tech companies have slipped through Benchmark’s grasp. The biggest misses include Google, which Benchmark had a chance to pursue but didn’t, and Airbnb, on which Benchmark initially got a bad read, Cohler says.

The biggest question facing Benchmark now is how to maintain its winning streak as new partners join and veterans like Gurley and Fenton eventually move on. The firm is seeking the answer with typical intensity. At the Monday partner meetings, they spend an hour running through a list of candidates. The process is exhaustive: Eric Vishria, the newest recruit, auditioned for ten months. The firm wants to add a couple of partners over the next few years. The goal, says Gurley, is to avoid the generational struggles that have hobbled other Valley firms: “That’s the biggest secret of Benchmark. When our founders were at the peak of their powers, they handed us the keys.”

Tweets by @forbesindia
Chitra Ramkrishna: I am not a merchant banker or an advisor. I am a catalyst
Inox: The wind beneath its wings