In just a decade, Andreessen Horowitz has backed a bevy of startup blockbusters—Facebook, Instagram, Twitter, Airbnb, Lyft, Skype, Slack—and made just as many Silicon Valley enemies. To stay ahead, it's taking the unusual step of renouncing its venture capital status—and making even bigger, riskier bets 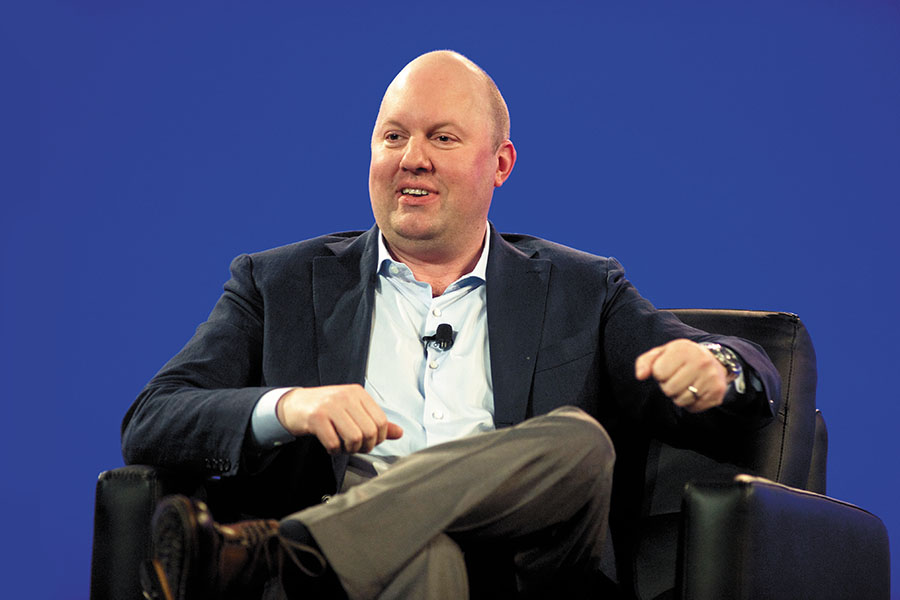 Emerging from the financial crisis in 2009, Marc Andreessen and Ben Horowitz laid out their campaign to take on Silicon Valley. The pitch deck for their first venture capital (VC) fund that year promised to find a new generation of “megalomaniacal” founders—ambitious, assertive, singularly focussed—who would, in the mould of CEO Steve Jobs, use technology to “put a dent in the universe”. In getting behind the likes of Facebook and Twitter, with a war chest that swelled into the billions, they proceeded to do exactly that.
Perched on a couch in his office at Andreessen Horowitz’s headquarters in Menlo Park, California, Andreessen, whose Netscape browser and subsequent company IPO were touchstone moments of the digital age, understands that the original word choice doesn’t land so well in 2019. His new take: “The 21st century is the century of disagreeableness,” he says. In an era of hyper-connectivity, social media and information overload, he says, those “disagreeables” will challenge the status quo and create billion-dollar companies. Ego is out, anger—or dissidence, at least—is in. If that’s an equally unpleasant prospect, consider Andreessen, who’s 47, the perfect messenger. From showy cheque-writing to weaponising his popular blog and (before Trump) Twitter account to hiring an army of operational experts in a field built on low-key partnerships, he’s one of Silicon Valley’s poster boys for upending the rules. And it’s worked: In one decade, Andreessen Horowitz joined the elite VC gatekeepers of Silicon Valley while generating $10 billion-plus in estimated profits, at least on paper, to its investors. Over the next year or so, expect no less than five of its unicorns—Airbnb, Lyft, PagerDuty, Pinterest and Slack—to go public. “What’s the number one form of differentiation in any industry? Being number one,” lectures Andreessen. **** Staying number one, however, is even harder than getting there. Optimism that technology will transform the world for the better has soured with each successive Facebook data scandal (Andreessen, an early investor, still sits on Facebook’s board). Every revelation of social media’s tendency to foster society’s worst forces poses a challenge to his and his firm’s trademark techno-evangelism. And in the conference rooms of Sand Hill Road, stakes in the next Instagram, Twitter or Skype—three of its best-known early deals—are no longer the upstart VC firm’s for the taking. Today there are a record number of rival billion-dollar funds and a newer kid on the block in SoftBank, which, armed with a $100 billion megafund, makes them all—Andreessen Horowitz included—look quaint. And one thing about saying you’re going to fix a broken industry—you create plenty of competitors who won’t hesitate to capitalise on even a whiff of doubt that you can back up the hype with results. 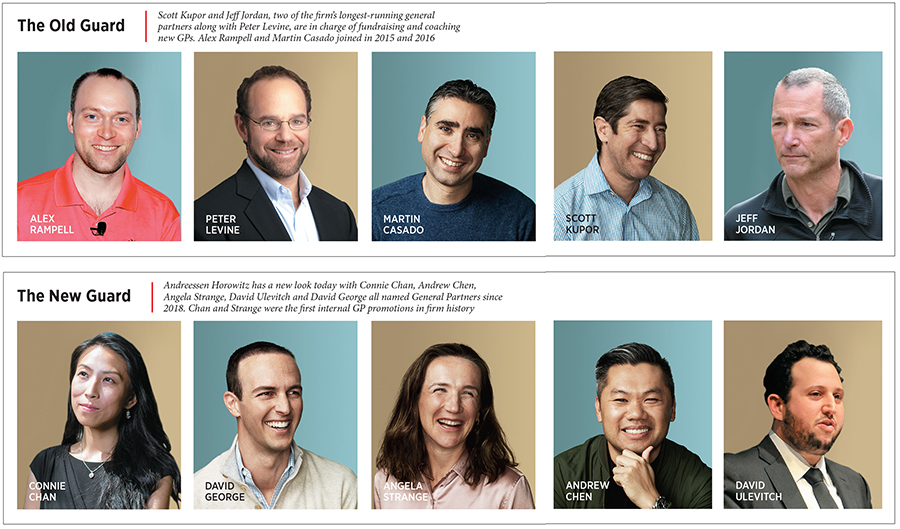 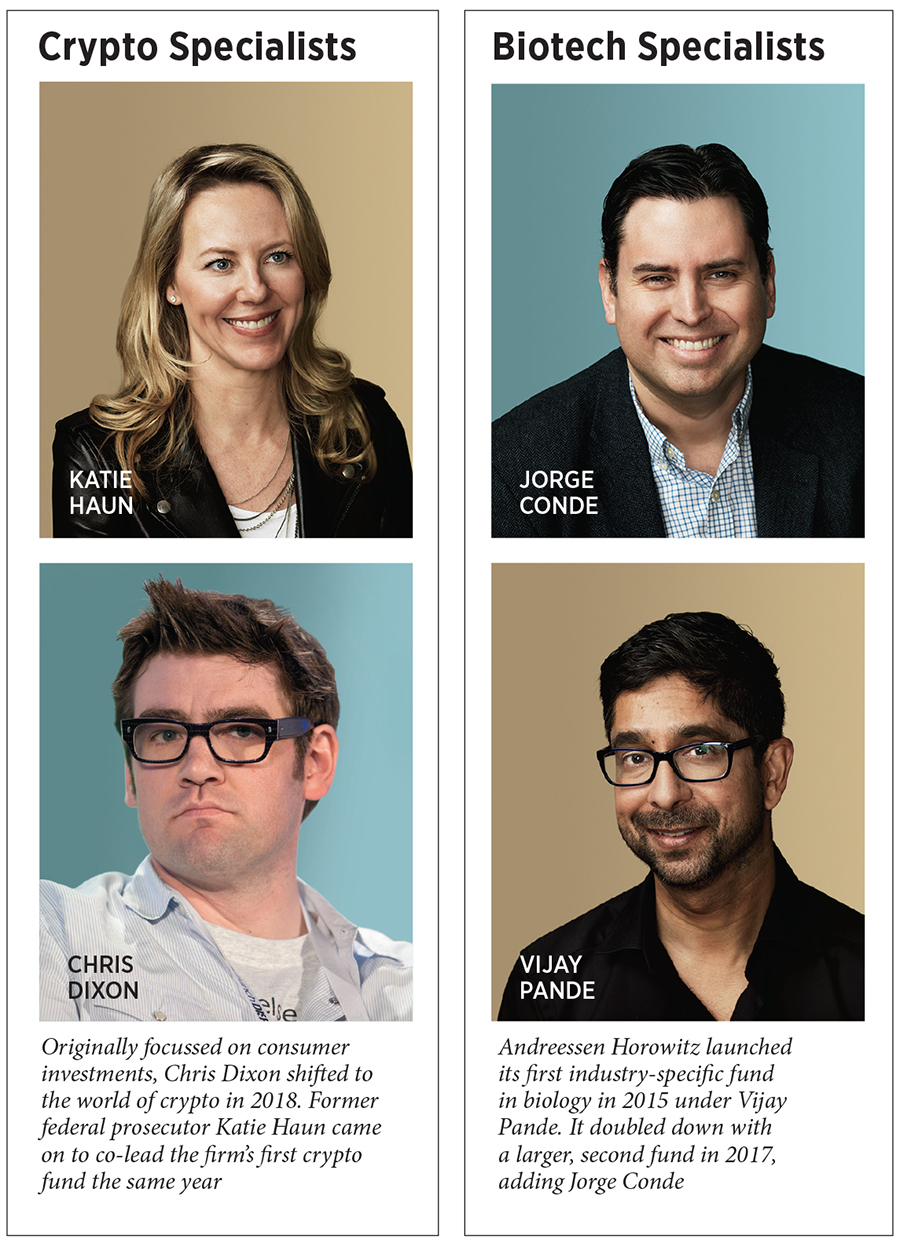 Which brings us to crypto. Last year the firm raised a $350 million fund in the up-and-down area. But until recently partners Chris Dixon and Katie Haun would meet in private with Horo­witz, their fund technically a separate legal entity from the rest of the firm. That meant they had different email addresses and their own website, because of legal constraints on funds that register as traditional VCs. While Andreessen Horowitz was an early investor in crypto marketplace Coinbase and was one of many firms to catch cryptocurrency fever in 2017, it’s one of the few that doubled down even after the price of bitcoin and ether flatlined. SEC regulations consider such investments “high risk” and limit these stakes, as well as secondary purchases and fund or token investments, to no more than 20 percent of a traditional VC fund. So Andreessen Horowitz spent the spring embarking on one of its more disagreeable moves so far: The firm renounced its VC exemptions and registered as a financial advisor, with paperwork completed in March. It’s a costly, painful move that requires hiring compliance officers, audits for each employee and a ban on its investors talking up the portfolio or fund performance in public—even on its own podcast. The benefit: The firm’s partners can share deals freely again, with a real estate expert tag-teaming a deal with a crypto expert on, say, a blockchain startup for home buying, Haun says. And it’ll come in handy when the firm announces a new growth fund that will add a fresh $2 billion to $2.5 billion for its newest partner, David George, to invest across the portfolio and in other larger, high-growth companies. Under the new rules, that fund will be able to buy up shares from founders and early investors—or trade public stocks. Along with a fund announced last year that connects African-American leaders to startups, the new growth fund will give Andreessen Horowitz four specialised funds, with more potentially to follow. That’s how the firm plans to keep up in a crowded VC landscape that experts say is bifurcating between specialist seed funds and a handful of giant, all-purpose firms. Traditional firms face more pressure than ever from the top and bottom of the funnel because of more sophisticated angel investor groups and non-VC giants like SoftBank’s Vision Fund, says Ilya Strebulaev, a Stanford professor who studies the industry. “VC is in flux,” he says. “We should expect a lot of fundamental changes.” Some are inevitable, like the industry’s wising up to the Andreessen Horowitz playbook of using services as a deal sweetener. Or the inherent limits to the Andreessen Horowitz model, which will always require large and growing funds to cover expenses. Others are fixable, like mixed report cards from former operating employees. High pay isn’t enough for ambitious, younger staff to stick around long when there’s little chance of upward mobility, they say. And with veterans of Andreessen and Horowitz’s old company, Opsware, still spread throughout the firm, the sense that some employees get special treatment—and are immune to sanction—can sap morale. Meanwhile, the firm’s insistence on calling everyone a partner might seem harmless, or an annoyance for others. But if those titles are limiting the prospects of promotion and career growth, as one former partner notes, they may need to be retired like the firm’s old GP rule. Most risky: Being the best-known VC firm on the block, or the one competitors mock until they copy, won’t matter if sweeping changes come for the entire industry. The world continues to wake up to the degree of power and influence big tech companies like Facebook and Google have over society—from livestreaming video of the Christchurch, New Zealand, mass shooter to YouTube videos that have united far-flung white nationalists—and to the likelihood they haven’t fully owned up to their responsibilities. Against such changing tides, the historical VC narrative of hypergrowth and Zuckerberg-like ambitions may fall flat. In a choice that could be equal parts intransigence or naiveté, Andreessen invokes Facebook’s CEO as precisely the example of the kind of disagreeable founder who has the resolve to take the necessary, wrenching steps to make things right. “He just put out this memo talking about basically reinventing Facebook around privacy and messaging,” Andreessen says in March. “Just close your eyes and imagine a classic guy in a suit doing that.” And though Andreessen says he’s too busy running the firm to have any hobbies—he’s reminded he has a young son now, too—he gives his own, grander twist to a quote from one of his favourite new TV shows, HBO’s Succession, to describe the mindset necessary to pull it off: “If you can’t ride two elephants at the same time, what are you doing at the circus?”