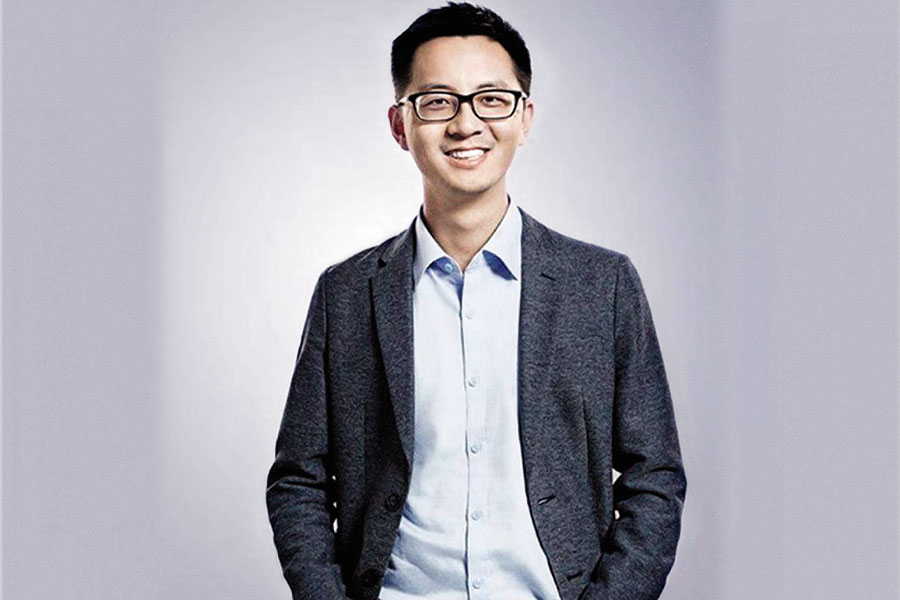 On Asia: “This is a market we must take,” says founder Liu Chengcheng
Image: Courtesy Kr Space

Myriad charts and figures of the latest real estate transactions in Chinese metropolises flash across the laptop of Liu Chengcheng as he talks, but one magazine article sits conspicuously on his immaculate desk, marked up with bold red lines. It tells the story of the co-working giant WeWork. “We pay a lot of attention to data,” Liu says in his high-rise office in central Beijing. “Especially the data of our competitors.”

Liu, 30, is the founder of Chinese co-working startup Kr Space. He’s going all out to defend his home market from WeWork, which is already in 26 countries and flush with cash, having just raised $1 billion more from investors. The New York company, valued last year at $20 billion, has built a global brand with its industrial-chic décor, large common areas, inspirational signs and perks like free beer and yoga sessions. But Liu is confident that Kr Space will come out on top in China because his team knows the local market better. “There are so many China-specific requirements,” Liu says. “I don’t think WeWork really understood all of these in its early days here, which was why they were expanding slowly.”

Essentially, Kr Space operates along the same lines as WeWork. It leases office space from developers and renovates it before subleasing to freelancers and companies for 1,000 yuan ($147) to 6,000 yuan per seat a month, depending on the location. The local knowledge he is leveraging against WeWork can include everything from complying with building and safety regulations and finding the best contractors to creating office designs better suited to China’s work culture.

Kr Space says the free beer and Ping-Pong tables offered by its rival don’t fit with the heavy workloads and the grueling “996” schedule (9 am to 9 pm, six days a week) that’s become pervasive among Chinese companies. It has instead opted to provide no-charge add-ons like financial and legal consulting services.

Kr Space officially launched in Beijing in 2016 as a spinoff of the now Alibaba-backed technology news site 36 Kr, which Liu founded in 2011 and still chairs today. His latest venture manages 270,000 square metres of office space in 11 cities across the country, as of June, while serving 40,000 members (the company calls them “users”), according to a spokesman.

Investors are also moving in. Kr Space will soon close another funding round that should raise $200 million at a valuation north of $1 billion, according to three people with knowledge of the matter. Early talks of an IPO in the US have also been taking place. A Kr Space spokesman declined to comment on the funding but says there are no IPO plans yet. (Liu won’t say what stake he is retaining.)

Also very much in the hunt is China’s Ucommune, led by Mao Daqing, a former executive of real estate giant Vanke. It was valued at $1.6 billion after merging with local rival Wujie Space in March.

The domestic challenges are also better at controlling costs, according to Jeacy Yan, a partner at investment firm IDG Capital. “Office sharing is a very localised business where you have to focus closely on operations,” Yan says. “Local companies have a much bigger chance of becoming the winner.”

Ken Xu, a partner at investment firm Gobi Partners and an investor in Kr, points to Liu himself as one of the key factors in the company’s growth. His experience running 36 Kr has enabled him to build a network among local entrepreneurs and better understand their needs.

WeWork, meanwhile, still leads in brand awareness, and domestic firms are working to catch up, according to IDG’s Yan. The company recently clinched a separate $500 million funding for its China-focussed subsidiary from investors that included Singapore’s Temasek. WeWork acquired Chinese rival Naked Hub for $400 million in April, and it plans to expand to 40 locations and attract 40,000 members by the end of the year.

Talks between Adam Neumann, WeWork’s billionaire co-founder, and Liu in Beijing fell apart because they couldn’t agree on who would have control of the combined entity, according to one knowledgeable party. A WeWork spokeswoman declined to say whether Neumann had met with Liu.

The Chinese market, according to Beijing consultancy iResearch, reached 5.5 billion yuan and should nearly double by 2019. It  benefits from government policies that encourage startup businesses to spur domestic innovation.

Like WeWork, which last year reported a loss of $933 million on revenues of $886 million, the unicorns Kr Space and Ucommune are well short of profitability. They plan ultimately to monetise advertising and premium services, which can be more lucrative than leasing seats, says iResearch analyst Yu Kexin.

For his part, Liu doesn’t see making money as a priority because Kr Space is currently focussed on expansion. And he is already looking beyond mainland China: In May, Kr Space entered Hong Kong, leasing seven floors at the One ­Hennessy building in Wan Chai. It’s also expanding into Bangkok, Seoul, Singapore and Tokyo, with the goal of catching up with WeWork in terms of total office space managed by 2021.

“WeWork is just entering Asia, so we are at the same page here,” he says. “This is a market we must take.”

Tweets by @forbes_india
I don't miss shooting at all: Abhinav Bindra
Adding ecommerce to your sales strategy? Making it work online