I don't miss shooting at all: Abhinav Bindra

Ten years after his historic win in Beijing, Abhinav Bindra, India's only individual Olympic gold medallist, talks about the journey leading up to that "piece of metal", his battles with himself and life after retirement 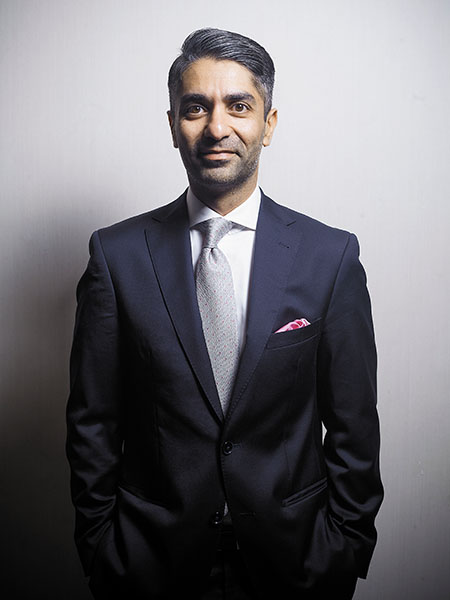 Abhinav Bindra says competing in an Olympic final is the most difficult thing he has done in his life
Image: Aditi Tailang

Q. Your Twitter bio says ‘5x Olympian, founder of Abhinav Bindra Targeting Performance, member of the IOC athletes’ commission’, etc. What about being an Olympic gold medallist?
Frankly, when I look back, I don’t even remember the gold medal. What I remember most is the journey, the trials and tribulations that I had to encounter on a daily basis, the hard work that I had to put in day in and day out when nobody was watching. That is what’s so exciting and challenging at the same time. That is something I am more proud of, not the mere outcome. The outcome is just a piece of metal in my cabinet.

Q. What are some of those trials and tribulations?
Shooting is a lonely sport, but I had a constant companion: Self-doubt. It was a challenge to overcome it on a daily basis, to make myself gain the security and somewhat the confidence and belief that I’ve got to go out there and do it.

Q. How did you overcome it?
I never did. I just suffered through it. Just endured it.

Q. In your own words, you didn’t like sport, you weren’t competitive. Yet, where did you get the hunger to win an Olympic gold?
Because I wasn’t competitive enough, because I wasn’t talented enough, that was the challenge to myself to work hard and become someone decent despite my shortcomings. I think everybody, even the most gifted of athletes, is born with limitations. It all looks nice from the spectators’ point of view. But internally the athletes go through a lot. The Olympic gold was the bird’s eye because that was the epitome of sporting success, the most romanticised platform for you to perform in global sport. Like everyone else, that is the dream I lived for 20-odd years.

Q. Shooting is an internal sport. One can’t see the bruises, the sweat. What does it feel like for a shooter at the range?
Oh, there are plenty of internal bruises. Competing in an Olympic final—and I’ve competed in three—is possibly the most difficult thing I’ve done in my life. The amount of duress that your body and mind are put under is indescribable. People often talk about my last shot in the Beijing Olympics, that 10.8 that fetched me the gold. How did I feel while shooting that? Imagine climbing a 20-storeyed building and then trying to stand still and attempting the best shot of your life. That’s how I felt. My heart was ready to explode, but even with that internal volcano, I had to find the stillness of body and mind to perform my best shot. 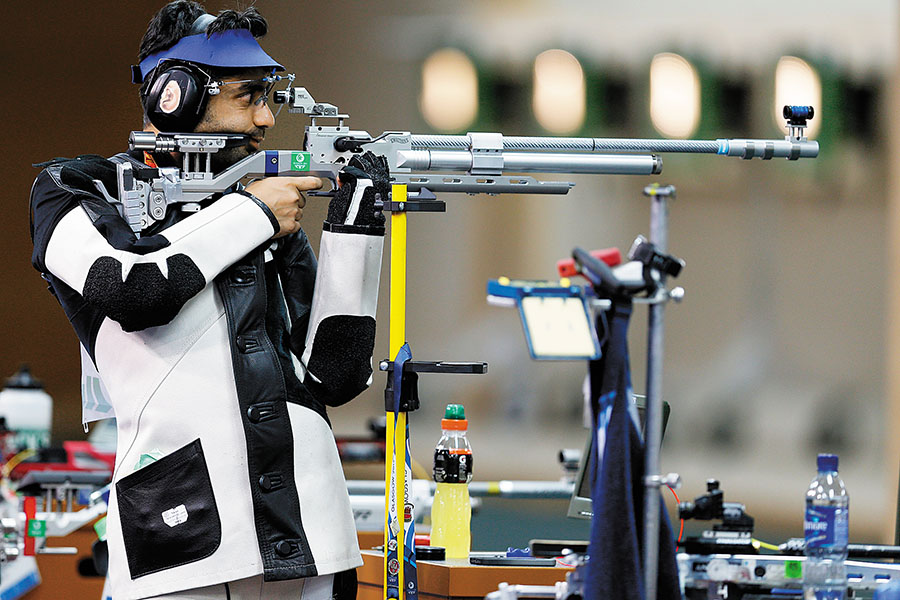 Bindra lived with a dream of winning an Olympic gold for 20-odd years. It came true in 2008
Image: Russell Cheyne / Reuters
Q. You played one of those Olympic finals, your last, in Rio in 2016, following a difficult battle with epilepsy.
I had a challenging couple of years prior to the Games in Rio. But the greatest thing I  did, and what I am perhaps most proud of, is I didn’t pity myself. When you are under such personal stress, self-pity comes easy. I didn’t do that. Rather I tried to find the best possible solution, and I was in top shape going into Rio. I finished fourth not because of a trembling hand or epilepsy; I finished fourth because I wasn’t good enough for third.

Q. For a person battling self-doubt, does a performance like an Olympic gold heighten the fear of failure, that your future achievements will all be benchmarked against that?
When you achieve your highest goal, the real temptation is to just stay there. But the reality of life is that to climb the next peak, you’ve got to climb down from your current position and work hard and suffer again to find the energy and zeal to climb the next peak. You can’t just climb from one peak to another. You try to do that and you’ll just fall in between.

Q. You’ve been a shy and reticent person. How did instant recognition post-Beijing change your life?
I continue to be like that. You won’t get much out of me [laughs]. I didn’t like what happened post Beijing. I was rather happy to be in my shell, leading a lonely life with self-doubt. It took me some time to come to terms with it.

Q. For someone as private as yourself, how did you open up to write an autobiography [co-authored by veteran sports writer Rohit Brijnath]?
It was therapy for me. The first version of the book came out in 2010, and I really enjoyed the process. I worked closely with Rohit. During the process of writing the book, we exchanged close to 800 emails. I made several trips to Singapore, where Rohit lives, and he came to India several times. The idea was to give an honest account of what I did. You know, sometimes athletes are projected as superheroes; in reality, they are not. I just wanted to bring the absolute truth to the picture and share my internal battles. It helped that I got along with my co-author as I really respect him and appreciate his understanding of sport.

“ “I don’t even remember the gold medal. What I remember most is the journey, the trials and tribulations... the hard work.”

Q. You went into retirement twice after Beijing, and you’ve come back.
I am not coming back again. In two-plus years since Rio, I’ve never gone back to the range. Not even once. I wanted my mother to turn the range into a vegetable garden, but they didn’t let me.

Q. So how does real retirement feel like now?
Now I understand how selfish I was. In an athlete’s life, everything revolves around the athlete. You wake up, train, do recovery, visit a mental coach, it’s all about you. Your family’s life revolves around you. And when real life comes, it’s not about you anymore. You are waiting for others to get something going. It’s different, but it’s nice too.

I don’t miss shooting at all. I had to earn a living; that was one of the reasons why I quit. Second, I was pretty clear about retirement a few years going into Rio. If you noticed, I dropped hints after the Commonwealth Games. I was mentally ready to get to a new place. Also, right now I am extremely busy. That also helps me to not think about it.

Q. In your book, and elsewhere too, you’ve been pretty critical of sports administrators.
I am critical when things are not good, but I am also appreciative when people do good work. Things are changing at a certain level. For example, shooting’s done a good job. They’ve set up a junior programme that has brought in results; it’s not an overnight thing; a process was put in place for the last six to eight years and now the results are showing. Rio wasn’t a success for the shooting federation, but they had the foresight and vision to set up a committee for introspection. I was the chair of the review panel and we were critical of a lot of things they did. But they were open enough to make the report public and somewhat act on it. I like that and appreciate that.

Q. Does it help to have a sportsperson as a sports minister?
Yes, I think so. He [Rajyavardhan Singh Rathore] understands what it takes to win an Olympic medal, having done it himself [silver in Athens in 2004]. I haven’t followed his work too closely, but I do hope he is getting the right systems in place that will not be dependent on an individual. The systems should carry forward a legacy, and build champions over and over again.

Q. You’ve set up the Abhinav Bindra Targeting Performance centre. What do you expect to achieve with it?
I currently have three centres—in Mohali, Delhi and Bengaluru. The first two are purely commercial, and the third is run by my foundation where they are giving free access to athletes. Operations started around February-March, and since then we’ve serviced about 400 athletes. I’m most interested in giving grassroots athletes the best possible technology and training.

My centres are primarily meant for performance enhancement, and injury prevention and management. I went to quite a few centres around the world to treat injuries in my career. That gave me insights into the world of high-performance sport, and I tried to bring the best possible practices available. For example, concepts based in Steam, which is an abbreviation for science, technology, engineering, analytics and medicine. Everything in a modern day athlete’s career is rooted in these. Being not just diagnostic in nature, but using diagnosis as just a starting point to customise training plans. Sports science often becomes very research-oriented; I want it to have more applications and prepare the athlete on the field of play.

Q. Indian shooters have been doing fairly well on the international stage. Look at even teenagers like Manu Bhaker, Shardul Vihan, Saurabh Chaudhary, Anish Bhanwala. How do these young shooters bridge the gap at the senior level?
‘Fairly well’ is an understatement; they are doing very well. They’ve won over 20 medals in the World Championships. How do they bridge the junior-senior gap? That’s a good question. And it’s not just in India but worldwide that most talented junior athletes fail to make the transition to the senior level. We have some amazing talent. What we need to ensure is we nurture them, handhold them. Failure is bound to come, difficult times will come, but we have to make sure we guide them through this transition. My advice to the athletes is that success will come but the hard work really starts now to sustain and reach that elite level. So keep persevering. As I like to say, the Olympics are not every four years, they are every day.