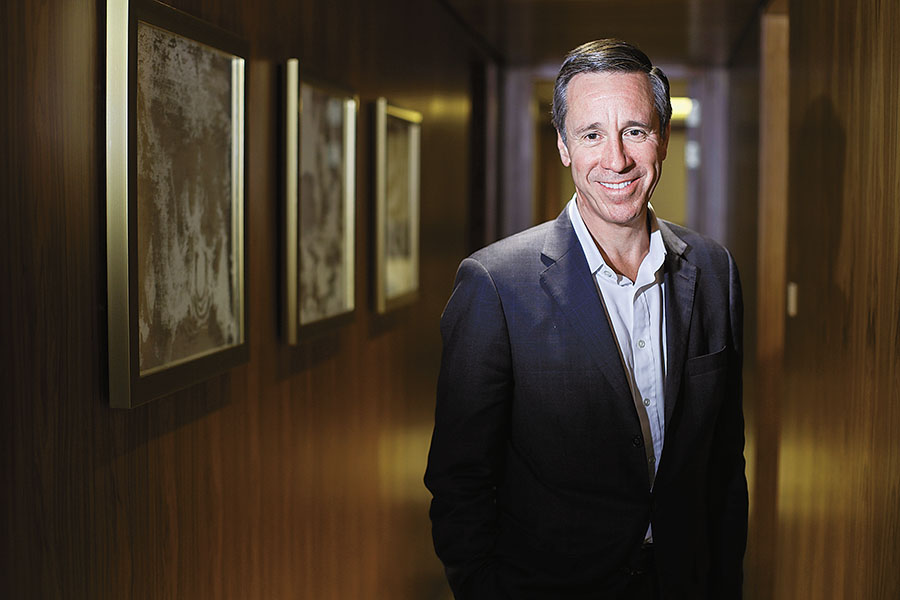 Arne Sorenson was either out of his mind or making the best move of his career when he picked up the phone in October 2015 and dialled Bill Marriott. The octogenarian patriarch of the hotel empire had anointed Sorenson as Marriott’s CEO just three years earlier, the first time someone from outside the family had led the 92-year-old firm. Now Sorenson was going to propose something crazy: Spend $13.6 billion to buy rival Starwood Hotels, which ran upscale chains like the W, St Regis and Le Meridien. This at a time when Marriott’s market cap was just $20 billion and traditional hotels were fighting a furious rearguard action against internet upstarts like Airbnb and Vrbo. “It was obvious he was thinking, Oh, my God, are you kidding? A $13 billion deal?” Sorenson recalls. “Everything’s ­going so well already, why would you add this to it?” But Sorenson couldn’t shake the idea of adding Starwood’s 11 brands, including Westin and Sheraton, to Marriott, which would create the largest hotel company in the world. When the former lawyer sat down with Bill Marriott to review financial models four days later, he was persuasive. Marriott signed off. The rise of Airbnb and changing tastes in travel among millennials, favouring Instagram charm over cookie-cutter predictability, risked making hoteliers irrelevant. Marriott under Sorenson has been anything but. The company’s footprint has doubled during his tenure to more than 1.3 million rooms. Its revenue topped $20 billion in 2018, up by 62 percent over five years. Postulate that Air­bnb is an industry killer and Sorenson, 61, quickly points out that Marriott’s revenues per available room have grown in each quarter for the last five years. “Is that the death of hotels?” he says, the corners of his mouth curling into a smile. “I don’t think so.” Investors can also smirk—Marriott’s shares are up by 226 percent since Sorenson took over in March 2012, besting competitors like Hyatt (up 69 percent) and Hilton (up 117 percent since its 2013 IPO) and crushing the S&P 500 (up 113 percent). That market performance, plus its reputation for job creation (it has 730,000 workers), alongside sustainability efforts like the decision to stop offering single-use plastic toiletries, powered Marriott’s return to Forbes’s Just 100 list of America’s best corporate citizens this year. But despite the plaudits, last year was rocky for Sorenson. Marriott discovered a massive data breach in Starwood’s systems, leading to a $126 million fine. Strikes in the US over workers’ wages cut into its 2018 revenue, and Trump’s xenophobic rhetoric caused a slump in international travel to the US. All those pale next to Sorenson’s most personal challenge yet: Stage 2 pancreatic cancer. In late August, a week after finishing his chemotherapy treatments, Sorenson says his hair is a little thinner and his form trimmer. “My barber says don’t shave it because there’s a lot of guys who do comb-overs,” he says with a laugh. For a man used to spending 200 days a year in Marriotts on the road, one of the biggest changes has been his decision to stick closer to home, both to protect his health following radiation treatment and to be nearby for surgery in November. 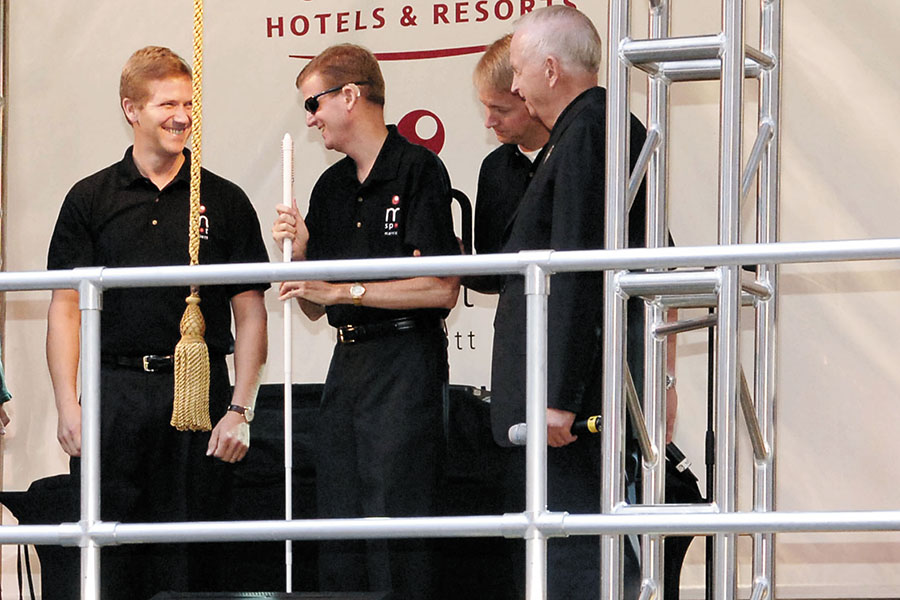 “I don’t want to be a cancer CEO. I don’t think of myself as a cancer CEO,” Sorenson says. “I am optimistic, but I am also aware of the significance of the diagnosis that I’m confronting.” The Minnesota native got into the hotel business when John Willard “Bill” Marriott Jr, the son of the hotel chain’s founder, plucked him from a DC law firm in 1996 after he represented the company in a lawsuit. Known as a good listener who will “quibble” over something if he disagrees, Sorenson proved the perfect understudy, moving up from head of M&A to chief financial officer in just two years. By 2003 he was the president of Marriott in Europe. Six years later, he was named president and chief operating officer. Sorenson was not only a competent executive; he also shared important values with the devoutly Mormon Marriott family. Sorenson was born in Tokyo to Lutheran missionary parents, and faith was a cornerstone of his upbringing. That connection was key when Bill Marriott abandoned his first plan, to pass the business directly to one of his four children. His eldest son, Stephen, died in 2013 from a health condition that had left him blind and mostly deaf. Daughter Deborah Marriott Harrison left Marriott to raise a family in the 1990s and rejoined in 2006 in its government affairs office; she is now a board member. Another son, John Marriott III, followed his father’s footsteps into the business, rising from hotel cook to operations exec. But he also battled a drug and alcohol problem. By 2005 his father had decided he wouldn’t succeed him. David, 12 years younger than John and in his 30s when Sorenson took charge, is now the chief operations officer for the eastern region of the Americas. Bill Marriott trained Sorenson in the family’s ways, including a willingness to take risks and adherence to the family motto, “Success is never final”. Even now, the 87-year-old board chairman likes to call Sorenson from New Hampshire and talk about the business, particularly after hearing an earnings report. “I think we’re similarly driven toward winning, similarly driven toward making sound decisions,” Sorenson says. The Starwood deal proved to be a game changer, decisively vaulting the company past Hilton. Just over half of Marriott’s 7,100 hotels are franchised, meaning owners pay 4 percent to 6 percent of each hotel’s room revenue (plus an extra 2 percent to 3 percent of food and beverage sales) to use the Marriott name, loyalty programme and customer service. The remainder of its hotels pay extra for the privilege of having Marriott manage their property. If the managed properties outperform, Marriott takes another cut. For hotels in Asia and Latin America, that amounts to around 7 percent to 9 percent of profit. For US properties it manages, Marriott pays a guaranteed sum to the hotel owner first and then takes as much as 25 percent of its remaining cash flow. (Marriott avoids the pitfalls of taking on too much real estate: It owns only 14 properties worldwide and leases another 49.) “The deep dark secret is he is a deal junkie. He loves deals, and he loves winning competitive deals,” says Tony Capuano, Marriott’s chief global development officer. “Two thousand eighteen was the seventh straight year of record deal production for the company, and I don’t think it’s any coincidence that sort of lines up with the time that Arne has been CEO.” Sorenson’s best idea to tie it all together so far is Marriott Bonvoy, a loyalty programme, meant to draw in frequent travellers and reward them for staying at Marriott’s 30 brands. The programme is popular: Bonvoy members booked around 50 percent of Marriott’s hotel nights last year. “The rewards programme, based on dollars spent, already delivers about a 6 percent-to-7 percent return when the points are redeemed, better than a lot of credit card returns,” Sorenson says. The more customers stay at Marriott chains like Aloft Hotels—or use their reward points on other stuff like rental cars or a soon-to-launch Ritz-Carlton cruise line—the more property developers want to put the Marriott name on their hotels. Today around 20 percent of new hotel rooms being built around the globe are Marriott. “It just keeps feeding on itself. The bigger you are, the better your opportunity is going to be,” says Wes Golladay, an analyst with RBC. One ongoing concern: Travellers who book stays through Expedia or Kayak generate less revenue for Marriott and don’t feed its Bonvoy flywheel. So far, these booking-site challenges have been manageable, but Sorenson is wary about what will happen if Google or Amazon gets into the game. “When Amazon surfaced, what I convinced myself was that we’re in a different place from retail, generally, because you can’t ship a night’s stay to somebody in a box,” Sorenson says. But now “it’s clear that it’s not enough of a defence”. His strategy is to bulk up: “I want to be as big as possible.” As Sorenson deals with his cancer treatments, his team has taken some meetings off his calendar. But that’s only freed up time for the master dealmaker to make his next move. On a sticky summer morning in Washington, DC, Sorenson surveys the nation’s capital from the rooftop lounge of the W Hotel on 15th Street. He points out the Washington Monument and the White House. Asked how many Marriotts he can count in the city skyline as he looks out, Sorenson simply grins and says: “Not enough.”

Tweets by @forbesindia
Google: The trust engine
Lifestyle, hypertension and diabetes: Caught in a vicious circle