Amid a luxury fashion apocalypse, one of the century's greatest entrepreneurial retailers—and one of America's richest self-made women—brought us deep inside the battle to save her brand 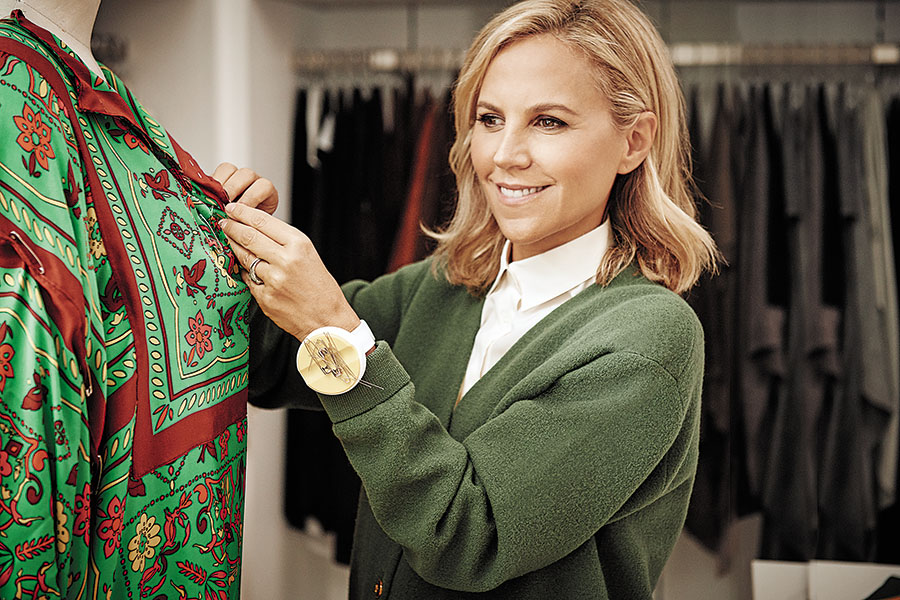 After seven long days and sleepless nights in March, Tory Burch’s impeccably decorated library in her red-brick home in the Hamptons officially became a war room. Pierre-Yves Roussel, her husband and chief executive of her eponymous fashion company, claimed the patterned green couch. Across from him, Burch—the company chairman, clad in leggings—took the desk by the window overlooking their seven acres. The couple barely stepped outside the room for three weeks.  “One day went into the next, and one week went into the next,” says Burch, who left her Park Avenue apartment with a small suitcase on March 6, thinking a quarantine would not last long. “I don’t think we had a break for a solid month. It was a very scary time—2008 happened, and we saw our business change overnight. But this was nothing like 2008. This was much, much worse.”  Luxury fashion is fickle even in the best of times. The coronavirus has been an especially virulent pest. Stores around the globe shut down amid stay-at-home regulations. Chinese travellers—whose purchases account for some 30 percent of luxury-goods sales in Europe and North America—put away their travel bags. J Crew, Neiman Marcus and Brooks Brothers all filed for bankruptcy. Revenues at Gucci parent Kering and LVMH, Roussel’s former employer, fell around 40 percent in the second quarter. Ralph Lauren sales tumbled by two-thirds.  Burch and Roussel realised quickly how dire the situation was. Within weeks, they were closing many of their 315 Tory Burch stores across the globe, furloughing most of their retail employees and shelving expansion plans, and coping with a longtime employee’s death from Covid-19. They then began formulating new plans to make sure Tory Burch LLC didn’t unravel.  Throughout this disruptive moment for the world, for business and for retail, Burch and Roussel let Forbes ride along on their eight-month navigation of this apocalypse. They’ve had to improvise, shutting stores, rerouting supplies and revamping ecommerce efforts, all in the hope that the business, which generated almost $1.5 billion in revenue in 2019, with a profit margin Forbes estimated at 11 percent, could survive. “We didn’t know how we would be able to pivot and be agile,” Burch says. “The unknown was so difficult.”  But jumping into the unknown also offers lessons, both good and bad, on how to pilot through a monsoon, at a time when shoppers are wary of leaving home and the threat of deadly disease lurks in every public space.  Burch had a fairy-tale childhood growing up in a grand old home in Valley Forge, Pennsylvania, the daughter of a former actress and a financier, both of whom prized dressing well. Upon graduating from the University of Pennsylvania in 1988 with a degree in art history, Burch moved to New York with a passion for fashion. She worked for Zoran, a Yugoslavian designer who was her mother’s favourite, then had public-relations and editorial stints at Harper’s Bazaar, Ralph Lauren and Vera Wang. After she married investor Chris Burch in 1996, the couple built a portfolio of investments that not only helped them financially but also gained them a spot in New York high society.  The first Tory Burch boutique opened in February 2004 in Manhattan’s Nolita neighbourhood, run by the couple and based on her idea for an affordable luxury and lifestyle brand. In 2005, the day after she appeared on Oprah Winfrey’s show, the Tory Burch website got 8 million hits. Retail riches followed: That year, the brand hit $17 million in revenue. Two years later it grew to $113 million, its gold T logo inching its way onto the exclusive global list of luxury badges. 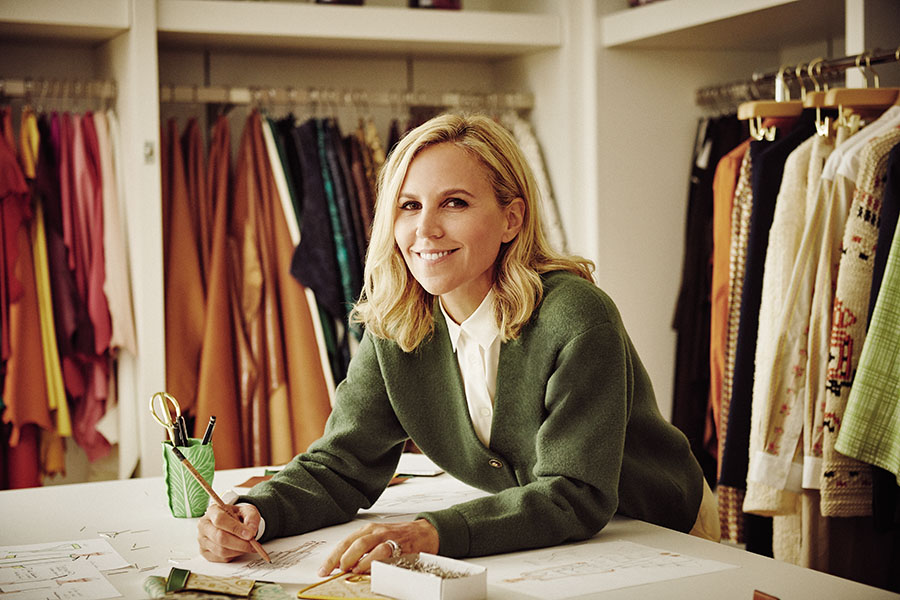 “Covid-19 has been a huge learning curve, but it’s been almost a reinvention and a reset as well,” Burch says. “We often say... never waste a good crisis.” Then came troubles at home. In 2006, Burch initiated the end of her marriage; the divorce was finalised two years later. Legal trouble arrived in 2012, when Chris started his own fashion company, C Wonder, which Burch claimed was informed too much by the premise of the brand they had launched together. They settled in early 2013, when Tory Burch LLC had $800 million in sales and 54 stores—and Forbes first declared her a billionaire. Chris stepped down as a director and sold most of his 28 percent stake to new minority investors General Atlantic and BDT Capital for $650 million. Burch describes her very public divorce as one of the toughest periods in her life. The next year she began dating Roussel, who as chief executive of LVMH’s fashion group oversaw global brands such as Céline, Givenchy, Kenzo and Marc Jacobs, and was a special advisor to LVMH’s billionaire founder, Bernard Arnault. Burch had met Roussel in 2012, when LVMH briefly expressed interest in investing in her company. For about four years, Roussel split his time between New York and Paris. The couple wed in December 2018 at Burch’s home in Antigua, a renovated estate that once belonged to heiress, horticulturist and fashion icon Bunny Mellon. “We got married, we wanted to live together and wanted to be in the same country,” Burch says. So she approached Roussel with a plan: What if he became the next CEO of Tory Burch? It took a bit of convincing, but he agreed. “Even before the pandemic, working together was a question mark,” Roussel says. “Obviously, I come from a different world, different culture, different continent.”  “I know [Roussel] was very hesitant at the beginning,” says Vogue editor-in-chief Anna Wintour, who over the years built a close relationship with Roussel through his work in the industry. “Working with your wife could be a little bit challenging at times, so he took a little time to be persuaded.” Less than two weeks after their wedding, Burch announced Roussel as the new CEO of her company; he officially started in January 2019, and she took a more creative role as executive chairman. The new partnership would soon be put to the test. 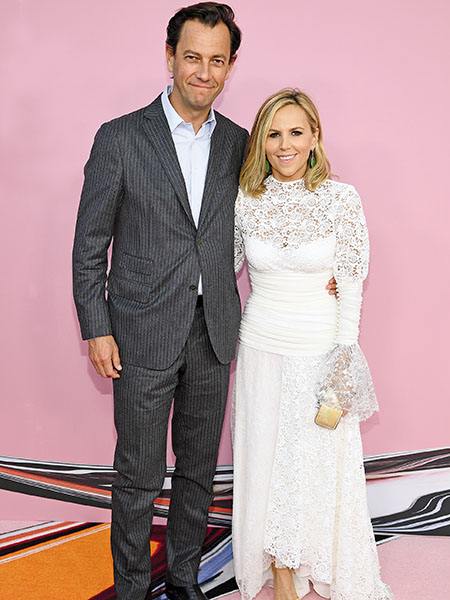 “Having Roussel during this crisis was a godsend for me and for our company,” Burch says of her husband The Covid-19 crisis arrived amid a career high. Burch, 54, says her 16-year-old business, with stores in 35 countries, had its best month ever in January. Soon after, she decided not to do to a runway show at the September 2020 New York Fashion Week—an endeavour that costs millions of dollars and that some in the industry believe to be a waste of money. Instead, she planned to throw a big block party on Mercer Street in Manhattan, where she would be opening a new boutique.  On January 28, McDonald’s and Starbucks closed some locations in China; that same day, Tory Burch LLC began shuttering its 29 stores in mainland China, including the 9,600-square-foot store in Shanghai, its largest in the world. Soon after, shutdown-related delays in Asia and Europe began to interrupt manufacturing of some Tory Burch products.  The first shock hit her supply chain. “You have one thing that comes from Italy, and it’s a button, and then Italy is closed,” Burch explains. “So that button on that sweater prevents the whole piece from being able to get made.”  When certain items couldn’t come together due to production delays, her team either changed their design or got rid of them entirely. Among the casualties: Two embroidered dresses from India and Eastern Europe and shoes from Italy. In some cases, they reused and repurposed fabrics in inventory from previous seasons, and moved production from places hit early by Covid-19, such as Europe and Asia, to Brazil.  Quality problems soon emerged. “Some of the products that we got as samples we were not so happy with,” Roussel says. So again, they either killed items or redesigned around the remaining parts. At one point, Burch cancelled an entire jewellery collection from Brazil that had run into production problems and didn’t meet her approval.

Tweets by @forbes_india
Photo of the Day: Festivities during the pandemic
Get Set Tech: How technology is changing parenting