According to the study, 77.1 percent of Salvadorans believe the government should cease using taxpayer funds to buy Bitcoin 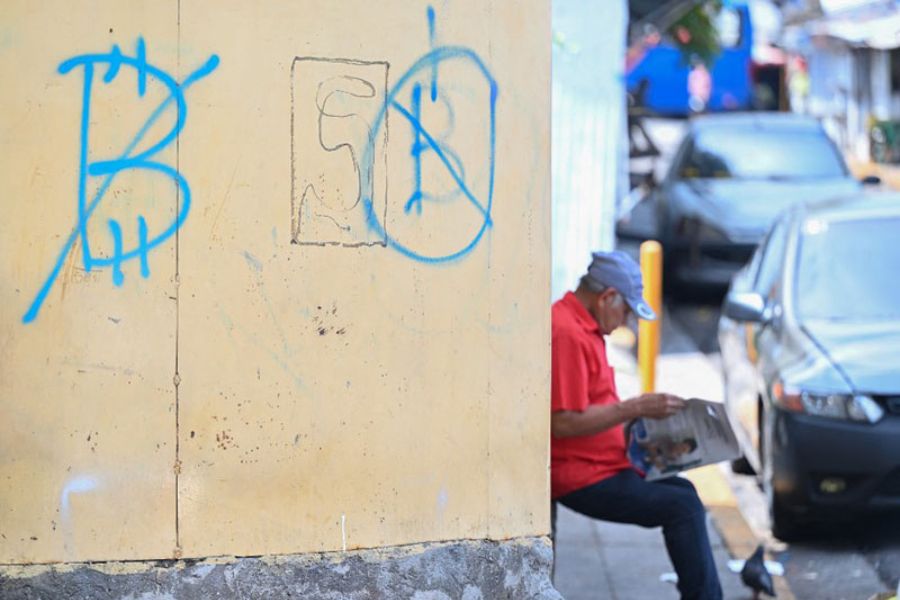 A man reads a newspaper leaning against a wall painted with an anti-bitcoin protest symbol, in San Salvador, on October 18, 2022. Most Salvadorans have not used bitcoin so far this year and consider that the emblematic bet of President Nayib Bukele has been a failure, assured Tuesday a poll of the private Central American University (UCA, Jesuit); Image: Marvin RECINOS / AFP

In a recent poll by José Simeón Caas Central American University in El Salvador, it was revealed that 77.1 percent of participants said they wanted the government to avoid 'spending public money on Bitcoin.'Furthermore, just 24.4 percent of respondents claim to have used Bitcoin as a form of payment since the nation's government accepted it as legal cash last year.The Central American University, a privately held, nonprofit organisation, questioned Salvadorans in the area about their thoughts on Legislative Decree No. 57, which will officially recognise Bitcoin as legal cash in El Salvador on September 7, 2021. 1,269 valid interviews were obtained during September 2022, with a stated margin of error on a 95 percent confidence range of 2.75 percent.Ninety-five percent of poll participants said their life "stayed the same" or "grew worse" after Bitcoin became legal money, despite the fact that there was no clear causal relationship between the acceptance of Bitcoin and the nation's economic state. The president of the nation, Nayib Bukele, is well-known for his use of Bitcoin to promote international investment and tourists.In the past year, Bukele suggested starting a 'Bitcoin City' where nominal tax rates are zero percent and $1 billion worth of Bitcoin 'volcano bond' is used to support construction. According to the deputy ambassador of El Salvador to the Kingdom of the Netherlands, Héctor Enrique Celarié Landaverde,"The dream of El Salvador is to have a Bitcoin City and from there to make our society bigger, stronger. We are trying to attract more and more investments to this area so we can develop these communities."The lawmaker and blockchain star is also well-known for making frequent purchases of Bitcoin using the nation's general fund. The Nayib Bukele Portfolio Tracker estimates that the Salvadoran government has invested more than $107 million in Bitcoin purchases so far. Nevertheless, the assets are only today worth $45.7 million due to this year's terrible market, despite dollar-cost averaging. Nevertheless, it should be emphasised that the portfolio tracker only monitors public statements and that the claimed profit and loss could not be entirely accurate without access to the government's full trading records.Shashank is founder at yMedia. He ventured into crypto in 2013 and is an ETH maximalist.

Tweets by @forbesindia
Going forward, India will play a big role in Starbucks' international strategy: Michael Conway
From Pather Panchali to Sholay: Here are the 10 best Indian films of all time