Lux Industries: A cut above the rest

As one of the fastest growing hosiery companies, it aspires to race ahead of its competitors with premium products 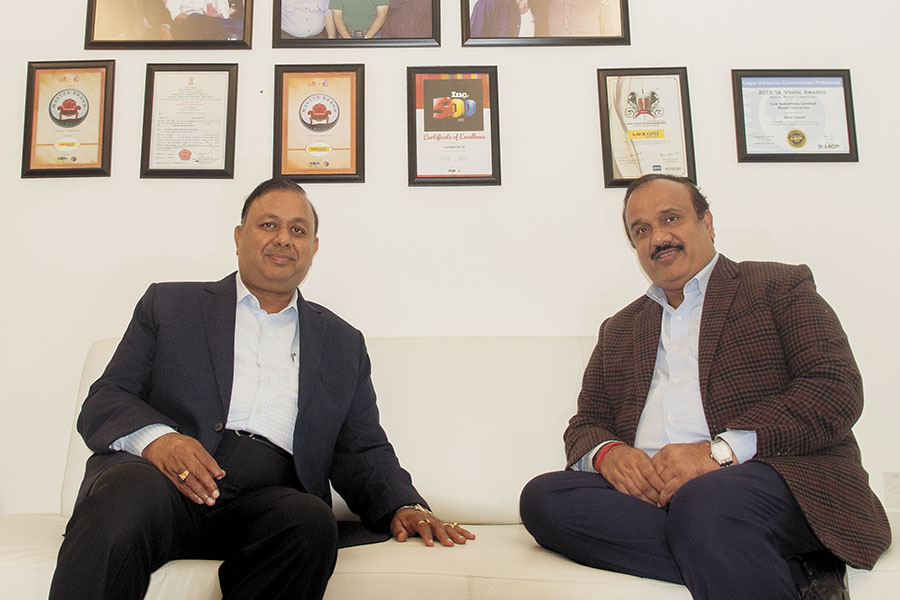 Ashok Kumar Todi (left) and brother Pradip have focussed on quality products and cut down on the number of outsourced functions at Lux
Image: Ashok Nath Dey for Forbes India
Halfway through the interview with the Todi brothers at their company headquarters in Kolkata, Pradip Kumar Todi pulls out a piece of fabric that he’s just received. The ribbed cloth is smoother than any I have seen and even Todi says such smoothness is rarely seen in a piece of cotton fabric. “My relationship with my suppliers goes back a long way and whenever there is something new, they make sure I see it first,” says the 54-year-old managing director of Lux Industries, who splits company duties with elder brother and chairman Ashok Kumar Todi.
Such longstanding networks have helped the Todi family keep its ear to the ground and turn a regional business into one of the most recognisable innerwear companies nationally. The last few years have seen the hosiery major grow rapidly, moving from a topline of Rs 500 crore in 2008 to Rs 1,400 crore today, clocking a growth of 11 percent a year. (The listed entity Lux Industries had revenues of Rs 972 crore in the financial year ended March 31, 2017, while unlisted subsidiaries make up the rest.) The profits of the listed entity have grown at a CAGR of 29 percent in the last five years to Rs 51 crore, at a faster clip than market leaders and closest competitors Page Industries (that distributes Jockey in India) and Rupa, which have registered CAGRs of 18.8 percent and 4.77 percent, respectively.

It’s a long way from 1957, when the family patriarch, the late Girdharilal Todi, set up Biswanath Hosiery Mills as an innerwear manufacturer. In 1964, his eldest son, the late Kishan Kumar (KK) Todi, was the first among the second generation to come on board. Over the next few decades, Ashok, 60, and Pradip joined the family business and expanded it, selling briefs and vests under the brand name Lux.
Ashok Todi says when he and his brother joined, a lot of production work was outsourced to workers for whom the company would buy the yarn and put down work specifications. But most sales were through their own distributors. By and by, the company regained control of the manufacturing processes (more on it later), but its extensive distribution network remained what the proprietors call “its strength”.

Built over five decades, Lux sells its products through 900 distributors across the country. “We have distributors all the way from Anantnag in the north to Bhuj in the west and Kanyakumari in the south,” says Ashok Todi. Each distributor serves 400 outlets, taking Lux’s reach to 360,000 outlets across India. In addition, the company has hired its own sales staff of 250, who in collaboration with the distributors conduct store recces to find out what’s working.

A turning point in Lux’s journey to becoming the third largest innerwear brand in the country (Jockey and Rupa being the top two) has been its move, in 1992, to invest big in advertising. Before this, the company was advertising in bits and pieces, but with the advent of satellite television in the early ’90s, it seized the opportunity to reach audiences across the country. It decided to buy slots on Zee TV and came up with a national advertising campaign.

Ashok Todi credits BR Chopra, the producer of popular serial Mahabharat, for the company’s crafty tagline ‘Yeh Andar Ki Baat Hai’. Chopra came up with the line during a discussion with the Todi brothers, when he asked them what they manufactured. His response—“yeh toh andar ki baat hai”—spawned a punchline that appealed to a cross-section of viewers nationally. The fact that it was mouthed by popular action hero Sunny Deol, who was roped in to promote the brand in 1992, enhanced its allure and turned it colloquial in the cultural vocabulary. Ever since, Lux has always been powered by celebrity endorsements—from Salman Khan to Shah Rukh Khan and Sushant Singh Rajput—furthering brand recall in households across the country. At present, the company spends about Rs 75 crore in advertising, an expense it counts as an investment to build a moat around its business, making it tough for smaller competitors to establish brand presence.

The Todis also realised that quality products would help them amp up the buzz created by advertising. Over the next decade, Lux substantially cut down the number of outsourced functions and pushed for research and development within the company. For instance, fabric processing—the stage at which fabric is coloured and bleached—has been moved in-house; so have cutting and stitching, allowing it to maintain better control over quality. The company also invested in advanced equipment, helping it manufacture 1.4 million pieces a day, the largest in India.

While over 90 percent of the innerwear industry is based in and around Kolkata, and some manufacturing is done in Tirupur, Tamil Nadu, Lux now has 11 units across India (in West Bengal, Uttarakhand and Tamil Nadu; the late KK Todi’s sons Rahul and Navin look after the operations of the Tirupur plant). Its latest state-of-the-art factory in Bengal’s Dankuni consolidates all functions like cutting and knitting under one roof, allowing it to benefit from scale of operations, and its automated facilities lead the company to save fabric and ensure better precision.

In 1993, Lux Industries tapped into the premium segment with Lux Cozi, which was priced higher than other products, earning it margins 2-3 percent higher than Lux.

In fact, the company is still invested in premiumisation-led growth and its next big inflection point will be its move up the value chain, for which it has roped in the third generation—senior vice presidents Saket and Udit, sons of Ashok and Pradip respectively.

The duo is leading the charge with two premium brands—ONN (men’s innerwear led by Saket), launched in 2011, and Lyra (women’s innerwear line led by Udit), launched in 2013. These products earn the company a much higher Ebidta margin of 16-17 percent as compared to the 10-11 percent for Lux Cozi and 8 percent for Lux. It plans to steer the flagship Lux Cozi brand to youth and urban consumers, enter the high-margin lingerie segment through Lyra and the casual wear market with ONN.

Lux’s biggest opportunity could also boomerang as its biggest challenge: Unlike Lux and Lux Cozi that are seen as push brands, that is the customer buys them because they are visible on shop shelves, brands like ONN (Rs 100 crore in sales) and Lyra (Rs 175 crore in sales) are marketed as pull brands—those that the customer specifically asks for, allowing the company to sell them at higher prices. It’s not an easy thing to do in India, where Jockey is perhaps the only innerwear brand to have successfully established itself as a pull brand.

Both Udit and Saket are bracing for the test and are preparing to make the company future-ready. They have built separate sales teams and also support their brands with heavy advertising to stay ahead of competition. As Udit explains, “We have a 40-member team that just monitors television channels 24x7 so that we can see where our competitors are advertising and then we can match them. Else, we would have to wait for a week to get the advertising data from market research agencies and matching our competitors’ ad spends would be difficult.”

Still, it remains to be seen how far these brands can go and how long it takes to build up a presence. Nischal Puri, Jockey’s former head of marketing who is now a consultant with Lux, says, “It can take upwards of a decade to build a sustainable national brand that resonates with customers.”

For now, Lux Industries has a target of reaching revenues of Rs 2,000 crore by 2020. The company has expanded its international footprint to the Middle East, Southeast Asia and Africa. This adds about Rs 100 crore to its topline and should be another engine of growth in the years to come. By then, it also expects to merge the unlisted portion of the business, Lyra, into Lux Industries. At, say a 14 percent Ebitda margin, it would make Rs 280 crore, a 197 percent jump from the Rs 94 crore Ebidta it made in the financial year ended March 2017. Last, there are also plans to get into a licencing arrangement with an international innerwear brand (like Page Industries has done with Jockey) that would fetch them a higher margin.

The numbers are staggering and the plans grand. But the young ’uns at the helm are ready to take on the challenge.