Sean Blagsvedt: After India, I Think Cities in the US Are Alien 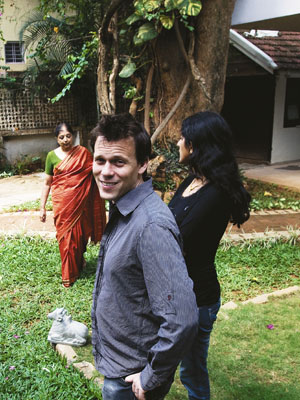 My journey to India was a mix of a professional and personal decision. I was already with Microsoft for five years and I had heard that two people I really liked — Dr. P. Anandan and Kentaro Toyama were headed to India to set up Microsoft Research in 2004. I pitched myself to go over. We were the first three to head to India. Professionally, if you come over with people you like, that really helps.

For the first four months, I had two big things to do: One, find us a place we could call home and two, head program management and advanced prototyping. I owned the relationship between the lab and the products division at Microsoft. In the lab, we were looking at language technology and how to build solutions for the poor in India.

We were only a team of three when we arrived in India, but in the first week, we got lucky as we had three interns join us — they were computer science students from BITS Pilani. They had come on an internship with the Microsoft call centre, but ended up working on tech support functions. They heard we were inside and asked if they could work for us.

I had worked with interns before and they are not different from interns in the US. They are smart, motivated kids. Of course, we are a research lab so the calibre of students we need is high, however, we would occasionally complain that Indian students would not ask many questions out of respect for their teachers, not like the American students. So, as part of the training, we said it is a first name basis and we want you to ask questions and question what we are doing because that is your job as a researcher.

The other big thing I was doing for the first few months was deciding where our office would be and supervise the entire process of construction and design. I would sit in coffee shops in Bangalore during this time to get a mood of what we were trying to create in the lab.

Our building construction took three months, and every day of those three months, I yelled: ‘This detail is not done or it is incorrect, why isn’t this here, why is this late?’ The yelling helped speed the process and I am not a yeller. I have noticed if you have too many levels of outsourcing and do not pay attention to the work people are doing, you will have poor quality stuff. But if as a boss you are there, everybody feels better and you get a higher quality product because people feel their work is being valued.

Once the building was up, a horrible thing happened. Within a month of our office being up and running, a well-known Kannada actor, the equivalent of Amitabh Bachchan to the Kannada film industry, Dr. Rajkumar, died, and the building got stoned. The glass was completely shattered. So I worked on this for three months and then one month later, some unhappy, drunk fans came, and a bunch of people who saw benefit in creating chaos destroyed the external surface of the building.

It was very sad. I was happy when the glass was up, but that took another two months.

As I have lived in India for six years now, I always find its institutions interesting as I was a public policy major. One thing you think about constantly is how you create institutional structures to make them more transparent. In India, you cannot come up with black and white opinions. The truth is much greyer as I learned later when we hired the fourth person at Microsoft Research. He was from the government. He quit and joined Microsoft Research because he thought government work was too unethical. He told me not to drive, ever, and if I ever got into an accident that I should call a number and leave the scene of crime. His presence at Microsoft was great; he could help us get things done. I had come here on an employment visa, and having a guy who is friends with guys in the police station was very helpful because we could get through processes without paying bribes. I learned that the bureaucracy of India is not all about the money. It is also about if you helped this person in the past.

I’m still in touch with him in spite of quitting Microsoft Research in 2007. I wanted to see impact in what I was doing, and in a research lab, since you focus on innovation, you do not get to see the extent of impact your research has. Internal studies in Microsoft and research papers had revealed the severe gap that existed between blue-collar workers and employers. This got me thinking, and with the help of my step father, I founded babajob.com — it helps connect blue-collar workers to employers. So if you would like to find a maid or a driver, or if a maid or driver was looking for work, we would bridge the gap between the two.

To sign up people, we went into the slums of Bangalore. I would go personally and the interaction with folks was handled by my driver and my cook, who we brought on as employees. Also, a colleague of mine from Microsoft, Vidhore Goyal, joined to help out. Today, my driver is no longer my driver but an executive in administration at babajob.com. He has been the longest serving employee, and he is my right hand man. He has grown to handle testing, data entry, work on Google docs. It is very heartening to see the class elevation. Today we handle 37,000 job profiles, and we have at least 14,000 registered employers. Also, our team has grown from just three people to 15.

These past few years working with babjob.com has changed my perspective on money. I am amazed at the level of waste you see globally. It is at extremes. There are lots of people on our Web site who earn $3 a day. If you say that to Americans, they will say, “Oh my god! $3 a day; you cannot even get juice!” There are some things I get mad at. Some people have power they take advantage. So it is these two weird poles. Almost everyone I interact with that has a legitimate job does not bribe people. But then there are people who have black money and just break the law and it becomes common.

Since I have become familiar with the density of people here, when I return back to the US now, I feel like I am walking into a city of gold where there is no one around. For the first month in India, I was shocked, you go around with your mouth agape; I go back to the US like that now. I think they are so rich and there is no one around, anywhere! You wonder, ‘Did they get beamed up?’

But one difference I like here and this has bad and good things, but the family is more important. It has more say in an individual’s life. I have a meal with my fiancée’s parents [now wife] five times a week. I probably saw my parents three times during college. Relationships are different and that is good.