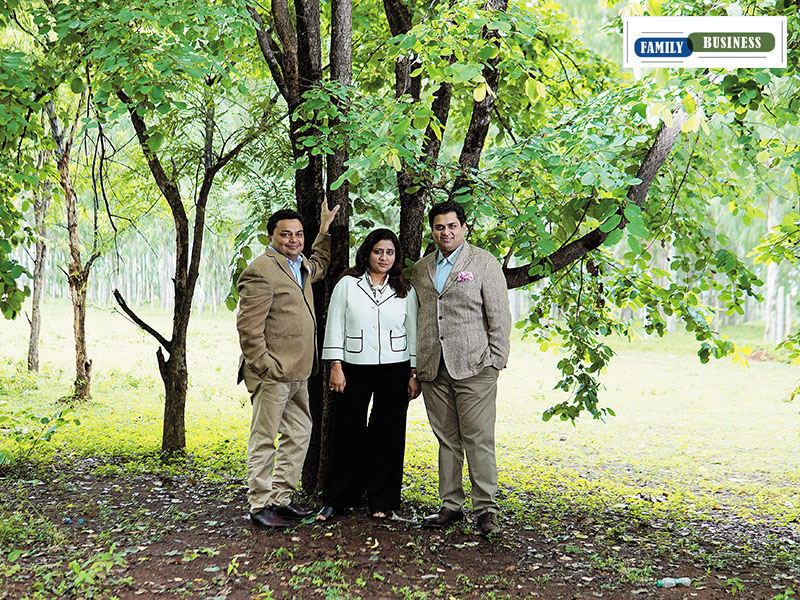 If you have eaten a Ferrero Rocher chocolate or used the Mango Body Butter from The Body Shop, chances are you have consumed butter made in a factory in Raipur, Chhattisgarh, owned by Manorama Industries.

In the 1940s, before Independence, Janakilal Agarwal used to work near Malkapur, a town in the Buldhana district, in the current state of Maharashtra. Every week he would return home with groundnut and other seeds for his wife. Come Monday, he would leave for work, while his wife ground the seeds to make oils and butter. Agarwal would carry these oils to Malkapur to sell, and earn some extra money. Gradually, they employed more women.

One day in 1955, Agarwal heard about a Muslim family in Khamgaon, 48 km from Malkapur, migrating to Pakistan, who wanted to give away a piston expeller. Agarwal and his son Hanumandas reached Malkapur to meet this man, who told him that it would be too expensive to take the piston expeller back to Malkapur. “Why don’t you set up your business here instead,” he told Agarwal. This was the beginning of Agarwal’s business.

After a few years, Janakilal went to London on a scholarship, where he completed a PhD in fat chemistry. He came back and expanded the seed-crushing business and spent most of his time in the laboratory experimenting. He discovered that oils from banana peels, mango kernels, and sal seeds could be used in chocolates. So he went to trade fairs in Japan and Germany to display his products.

“He did not have money to afford a stall at these fairs, so he would display all the products on his body. This is how he met Michael Ferrero. He explained to Ferrero that if he used these products the chocolates will have better stability, and so started the journey,” says Ashish Saraf, Janakilal’s grandson, president of Manorama Industries. The journey, however, came to an end when Saraf’s grandfather stopped the business in 2000.

In 2005, the new business, Manorama Industries, was incorporated by Saraf, his wife Vinita and her father Kedarnath Agarwal. Saraf’s elder son Shrey has been recently inducted as an executive director. The company has been named after Saraf’s late grandmother Manorama Devi.

In 2018, Manorama Industries was listed under the SME board platform of Bombay Stock Exchange and this September it is set for a main board listing. Its 2018 IPO raised ₹64 crore, which was used to set up its new manufacturing facility in Birkoni near Raipur. The company had issued shares at ₹188 apiece in 2018; on September 3, its price stood at ₹688.85, a jump of 266 percent. Even last September, the shares were clocking ₹188 apiece, which means the rally has been effectively over the last one year, especially since early 2020.

Manorama Industries specialises in producing cocoa-based equivalent (CBE), shea-based cocoa-butter equivalent (SBE), tropical specialty fats and butters like sal, mango kernel, dhupa, kokum and phulwara, which are available in the forests of India, and collected by nearly 8.5 million forest dwellers. CBEs are used both for food and cosmetics applications. The most beneficial cocoa butter alternative is CBE because its physical and chemical properties are extremely similar.

India has the largest sal forest in the world, with 16 percent of its total land covered by it. The CBE market has been growing rapidly due to a combination of changes in legislations across major economies that allow these fats to be introduced in chocolates and allied products and also due to rising cocoa butter prices across the world. 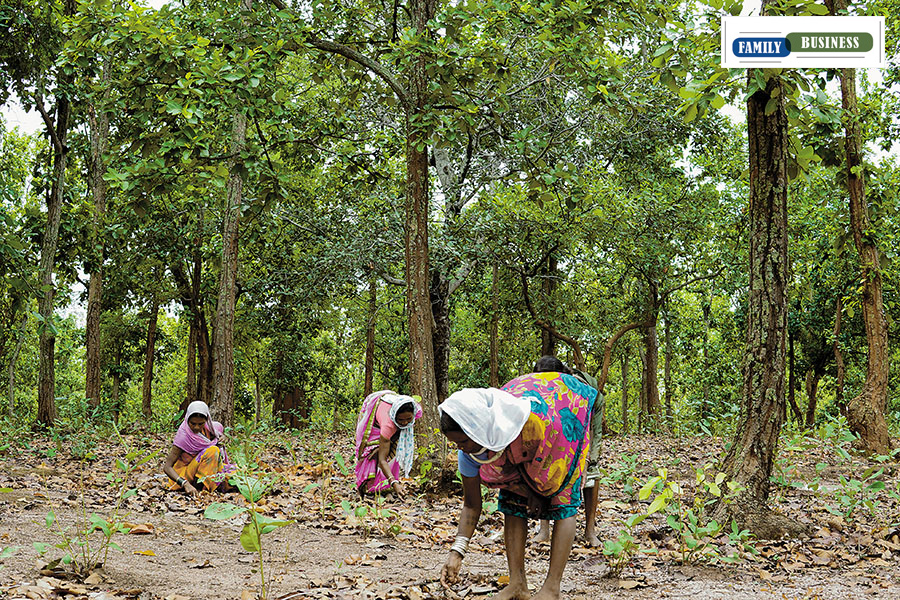 Forest-dwelling women across Chhattisgarh, Odisha, Jharkhand, Madhya Pradesh and Maharashtra collect these nuts and seeds. Apart from its India operations, the company has operations in Ghana called Manorama Africa, which procures shea nuts through social organisations, women’s groups and local markets, besides sourcing from neighbouring countries like Burkina Faso, Ivory Coast, Togo, Benin, Mali and Nigeria.These seeds are then brought to Raipur, where the final products are manufactured and sent to clients which include Ferrero, Mitsui & Co, Mondelez International, L’Oréal and The Body Shop, across 84 countries.

“Through our co-development approach, we start by gaining insights into the drivers behind market demand, as well as the challenges they present. We are in the applications business where we jointly develop products with our customers to ensure each solution is exactly in line with their specific requirements, ” says Saraf. 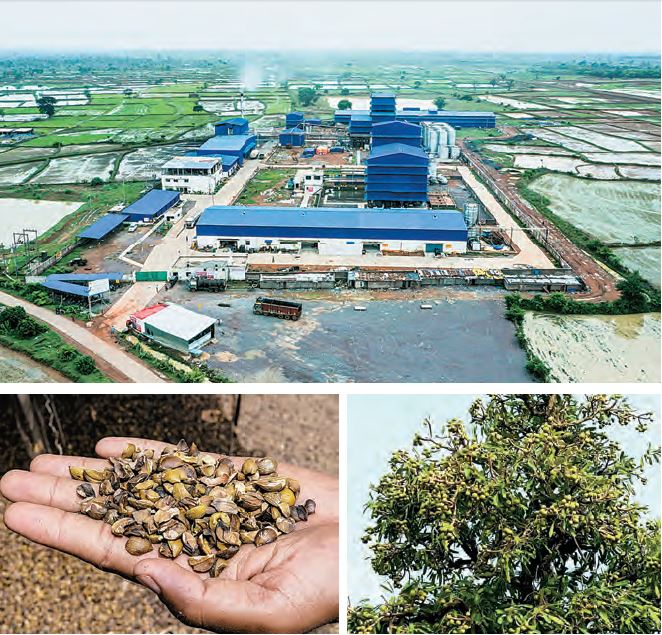 Manorama Industries’ factory (above) in Birkoni, Chhattisgarh (top left and right) from which it extracts specialty fats that are used in food and cosmetic industries globally
Image: Courtesy Manorama

In 2018, Care Ratings had said in its report, “Global CBE demand is currently nearly 180,000 tonnes of which 90,000 tonnes is stearine, which is made from processes predominantly undergone by shea nuts and sal seeds. Currently, Manorama Industries is among the top 10 manufacturers of sal oils and stearine, with an annual production of nearly 3,000 to 4,000 tonnes.”

Asia-Pacific is one of the largest regions of growth for specialty fats and oils, and will continue to be the largest market with an expected size of $36.8 billion by 2026. The demand for specialty oils and fats in the Asia-Pacific region is likely to remain concentrated in China and India, owing to a larger consumer and application base in the region.While most of the portfolio had to be exported, in May 2017, the Food Safety and Standards Authority of India allowed the use of CBEs in chocolates from January 2018, which has helped companies like Manorama.

Jeevan Patwa, an investor in the company, says one of the reasons for his investment is the company’s focus on research and development (R&D): “It has roped in Kris Bhaggan from Bunge Loders Croklaan as head of R&D, who has more than 30 international patents to his name. They have created a strong pipeline of B2B and B2C products, which creates strong entry barriers for the future.”

In India, its competitors include AAK Kamani, Wilmar International and 3F Industries. In the shea category, some of the global competitors of the company are Fuji Oil (Singapore and Japan), Bunge Loders Crocklaan, and AAK (Denmark).

Manorama Industries had revenues of ₹188 crore for the fiscal ended March 2020, compared to ₹102 crore in March 2019, a jump of 84 percent. Its profits went up to ₹23 crore from ₹19 crore during the same period, clocking a growth of 21 percent.

The management indicated that it has built the new capacity to produce butters and fats, and the availability of raw materials is dependent on seasons. For example, sal and mango are available between May and June, whereas shea is procured between November and December. “Hence we need to keep inventory for sustainable supply of finished goods as per the specification of customers.

Therefore we saw an increase in interest cost on working capital,” says Saraf. “Further, due to a delay of four months in commissioning the new plant, inventory carrying days increased and resulted in an increase in finance cost in the last financial year.”

Saraf believes people are becoming more health conscious and there is more demand for natural products from all over the world. “There is a huge demand-supply gap that exists in our business, so the only thing that we have to do is to increase production and increase volume because the market exists to absorb it.”

Saraf believes if the company keeps doing what it does with focus, it will be able to achieve the targets it has set for itself. It is now tapping newer segments in health care, which includes chocolate tablets, personal care and health nutrition.

Tweets by @forbesindia
Opinion: Vladimir Putin thinks he can get away with anything
Kushal Sharma The boy who didn't take no for an answer