An insider's guide to the season's best beverages

Drink up in style this season, with this guide to what's trending at bars across the country

The roses are in bloom at Villa Estea, a pretty private home by the Adriatic Sea in Abruzzo, Italy. It’s that kind of bright summer day—balmy, with clear blue skies—that you instinctively associate with the Mediterranean. The villa is hosting about 50 local winemakers, who have gathered to showcase their productions: The undiscovered wines of Abruzzo that few people outside this beautiful but non-touristy Italian region really know about. My favourite is the Cerasuolo d’ Abruzzo, a rather unusual rosé, deep hued like the cherries it is named after, high in alcohol (13 to 14 percent by volume), but very dry, fresh and zesty with a nose of the fruits and herbs of the land. It’s the ideal summer rosé that you don’t usually find amidst the sweet blushes and Californian zinfandels that have ruined the category (at least to my mind) and its perception. A rosé is not necessarily the low quality, sweet wine you may have occasionally sipped; given how few are available in India, even restaurants in five-star hotels with extensive wine lists usually keep just two or three varieties. Instead, if you have tried some of the well-made rosés from Provence, pinot noir country in the south of France, you would realise that the wine can be seriously good quality.

The Gordon’s Wine Bar in London that was frequented by the likes of Rudyard Kipling
Image: Getty Images

These wines are not necessarily cheap. Neither are the ones being attempted by even Bordeaux winemakers to tap into the surging popularity of rosés, thanks to Instagram. A Nielsen State of the Wine Industry Report in the US last year recorded a 64 percent growth of the category over the last 12 months. While most of the rosés are seemingly bought for their pretty colour, some are for connoisseurs. The Cerasuolo d’ Abruzzo is certainly one of them. For one, it does not fit the light-coloured stereotype. As Davide Acerra head of the Consorzio di Tutela dei Vini d’ Abruzzo (the Abruzzo wine consortium) says, “Because of the current trends towards paler rosés, many winemakers are trying to make wine of that colour. However, the traditional cerasuolo is always the colour of cherries, which you should get in the nose too.” Apart from the colour, what makes it exceptional is that winemakers are trying to make it in more traditional ways, which express the terroir. Some of the cerasuolo was made in cement tanks (instead of wood or stainless steel), a practice followed two generations ago that has now been revived. Other wines are bio-dynamic, bringing about a diversity in styles and natural expression of the terroir: You can smell honey or mint or apples or sweet peas in different glasses. 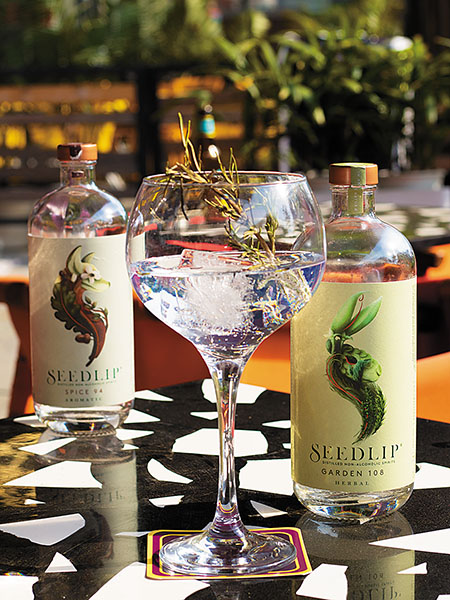 Since launching Seedlip three years ago, the company has grown from selling just a few thousand bottles to almost a million in 2019

Sherry is another sip of the season that you must heed. Traditionally, associated with the creamy, sweet styles preferred by old aunts, this fortified wine from Cádiz in Andalusia, southern Spain, is finally beating stereotypes in Europe and the UK.

***** In London, I visit what is perhaps one of the best kept secrets of the city, at least as far as Indian tourists go. Gordon’s Wine Bar at Embankment is supposedly London’s oldest wine bar, established in the 1890s, and was frequented by the likes of Rudyard Kipling. Housed inside a subterranean cave cut from a rock, it has vaulted ceilings, is entirely lit by candles, and has Dickensian memorabilia, including old newspaper cuttings. There’s an award-winning wine-list, of which sherry is the star. Behind the bar the wine sits in casks, from which it is poured directly. The revival of interest in dry, premium sherry is a somewhat recent trend even in the UK, where sales of the older, creamy varieties had been plummeting over the decades. Now, with more tapas and sherry bars sprouting, dry and elegant sherry is on the rise, as we can see from people queuing up for glasses of manzanilla at Gordon’s. 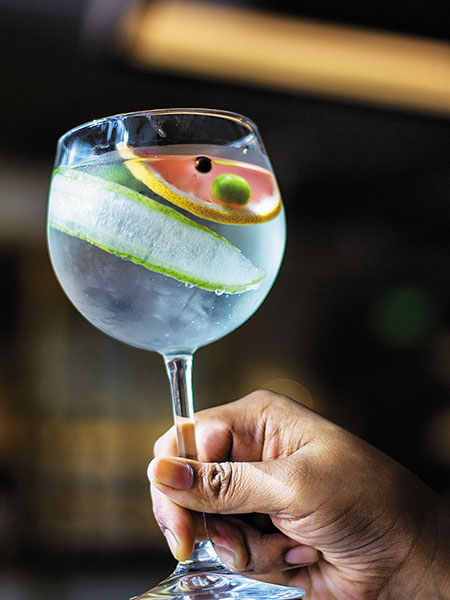 Seedlip, or non-alcoholic gin, is taking over bars and posh clubs in Europe

Sherry has a diversity of styles that belie its staid Victorian image. Lighter, drier and sharper styles include the fino and manzanilla (the lightest, driest sherry), while stronger ones include oloroso, amontillado or palo cortado. (All sherry is made from white grapes—Palomino, Moscatel and Pedro Ximenez, with Palomino comprising 90 percent of all sherries.) In today’s millennial world, drier sherry have caught on and are being used in cocktails or being sipped on their own. Their alcohol content is higher than other wines, and ranges from 15 to 22 percent. Unfiltered sherry are also getting quite trendy, and if you find something well made, like the en rama-style Hidalgo, you must try it for its yeasty, nutty, sourdough notes. En rama, written on many freshly released bottles every year, simply means minimal filtering, which retains some of the yeast that covers the wine and therefore adds more flavours from fermentation. Meanwhile, a popular saying on how to choose sherry to pair with meats goes like this: If it swims: Fino and Manzanilla; if it flies: Amontillado; if it runs: Oloroso.                                                                                                     ***** What do those who don’t want to drink alcohol drink? One of the biggest food trends in London and Europe actually is falling alcohol consumption. A widely quoted University College of London study in 2018, for instance, found falling alcohol consumption across age and income groups in London. Of the 10,000 young people in the UK it surveyed, the proportion of 16- to 24-year-olds who said they never drink alcohol rose from 18 percent in 2005 to 29 percent in 2015. The study also found binge drinking rates to have gone down. Unlike a generation ago, millennials are careful drinkers, big on health and low on binges. Studies aside, it is easy to spot this behavioural change in a city like London on weekends, as you go to bars and take the Tube back. Drunken revelry has shrunk. 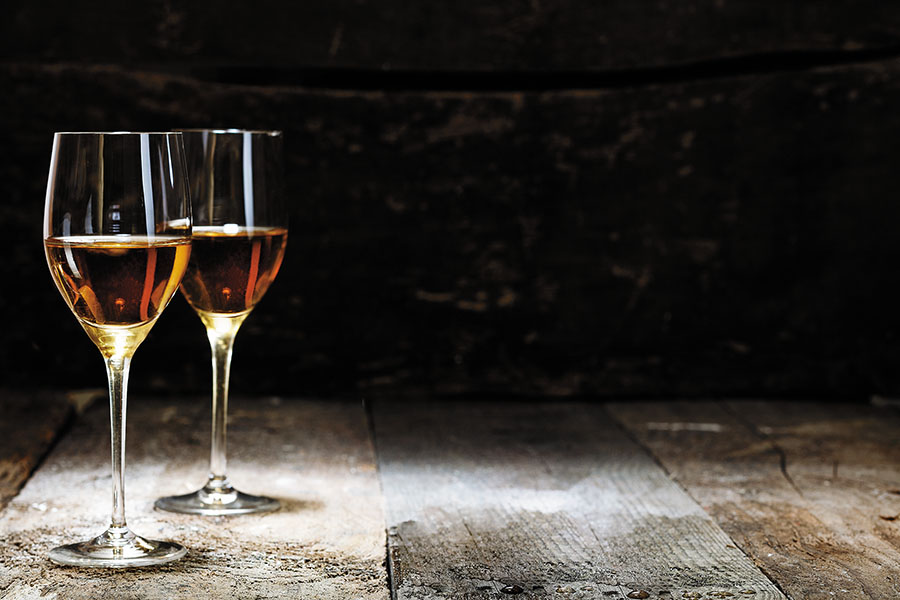 Drinking sherry is back in vogue
Image: Shutterstock

Instead, one big fad in the last two years is Seedlip—commonly dubbed “non-alcoholic gin”—at bars and even old-fashioned clubs where once scotch and soda may have dominated. Distilled from plants, herbs, spices, orange peels and so on, this is a drink with botanicals and a grown-up complexity that we otherwise appreciate in well-made craft gins; both use the traditional pot-still distillation. And it’s not cheap, with some variants selling for more than the price of gins: A 1-litre bottle of Bombay Sapphire at Sainsbury’s costs £20, as opposed to £24 for Seedlip. Despite this, it has been steadily catching the fancy of drinkers who don’t want to consume alcohol on their evenings out. Since launching Seedlip three years ago, its maker, Seedlip Drinks, has grown from selling just a few thousand bottles to almost a million in 2019. Though there are many other non-alcoholic beverages, including beers and wines, available in the market, one clear reason for this phenomenon has to do with Seedlip’s health image—it has no additives and no sugar. Moreover, its complex flavour makes it perfect for grown-ups who abhor juvenile, simplistic mocktails available in most bars. In London, Seedlip cocktails have become an entire category in themselves, opening up a market that did not exit. There is the No-groni (non-alcoholic negroni), which is quite credible even for a negroni fanatic like me. Indian bars are yet to make these but Seedlip has just made its India debut, imported by Brindco, one of the biggest wine and beer importers in the country. Two (of the four, globally) versions are being imported—Seedlip Garden 108 (made from garden peas; it apparently takes 108 days to sow, grow and pick peas from the garden) and Seedlip Spice 94 (after the 1494 voyage of Christopher Columbus). According to Aman Dhall, executive director of Brindco, a beverage importer, “the Indian non-alcoholic beverage market holds a huge potential and was valued at ₹524 billion in 2015, expected to grow at 17.6 percent CAGR till 2020.” “Currently, what we have are mundane products, mostly full of sugar and carbonation. Seedlip has the potential to make non-alcoholic cocktail experience a class apart with espresso martiNo (espresso martini equivalent), Garden Sour (gin or whisky sour equivalent) and so on,” he says. In hot and humid India, the list of drinks for an evening of entertainment just got better.

Tweets by @forbes_india
Should social media accounts be linked to Aadhar?
Zomato Gold, food tech and the deep discount dilemma