Tiffany & Co. presents the 'About Love' campaign with Beyoncé, Jay-Z, and a Jean-Michel Basquiat painting never before revealed to the public 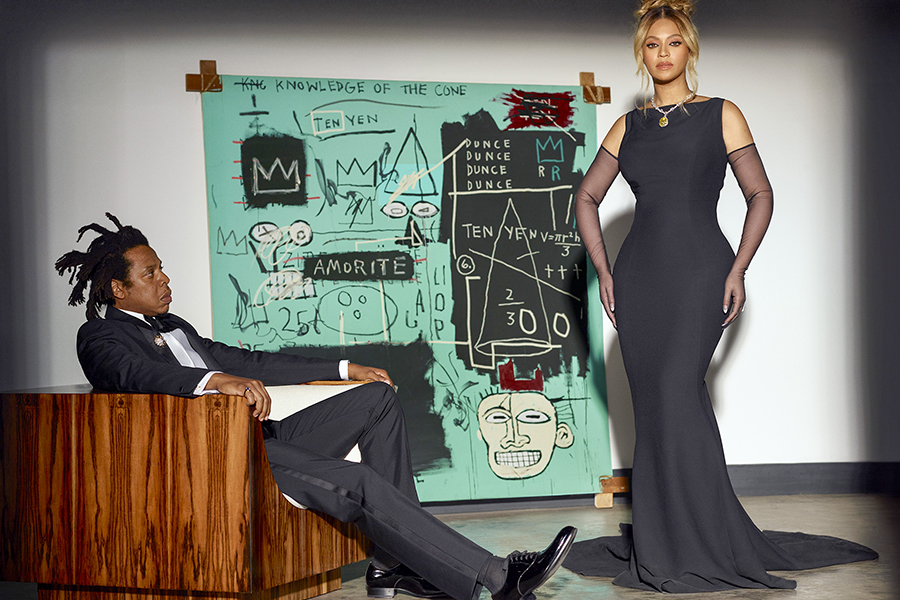 The first time Beyoncé and Jay-Z pose together for a luxury brand and a Jean-Michel Basquiat painting never before revealed to the public.
Image: Courtesy of Tiffany & Co

Tiffany & Co. is upping the ante by bringing together one of the world's most famous—and powerful—couples, The Carters, for its new campaign. And yet, Beyoncé and Jay-Z could be upstaged by a piece of art, a never-before-seen painting by Jean-Michel Basquiat, which is the backdrop for this campaign that celebrates modern love.

"About Love" is the campaign of "firsts." The first time Beyoncé and Jay-Z pose together for a luxury brand, the first time Jean-Michel Basquiat's 1982 painting "Equals Pi" is revealed to the public, and the first time the Tiffany Diamond, an exceptional cushion-cut 82-facet, 128.54-carat yellow diamond is worn for an advertising campaign. Actress Audrey Hepburn was one of the very few people to wear it for the promotion of the film "Breakfast at Tiffany's."

Epitome of the modern love story
But let's get back to the stars of this new campaign—The Carters, who were chosen for their power as a couple, both in the city and on stage—but also for their power of influence in the world (201 million followers on Instagram for Beyoncé, that's nothing to sneeze at). "Beyoncé and JAY-Z are the epitome of the modern love story. As a brand that has always stood for love, strength and self-expression, we could not think of a more iconic couple that better represents Tiffany's values," explained Alexandre Arnault, Tiffany & Co executive vice president of product and communications, in a release.

The first shots of the campaign show the couple dressed up, Jay-Z in a black suit, Beyoncé in a sumptuous low-cut back dress highlighting the sumptuous Tiffany Diamond, alternately in each other's arms, and then next to the never-before-publicly- seen painting by Jean-Michel Basquiat, displayed in the signature blue of the famous jewelry house. In addition to the legendary diamond, the two protagonists of the campaign obviously display a host of jewelry from Tiffany & Co.

Photographed by Mason Poole, the campaign is accompanied by a film that once again pays tribute to the movie "Breakfast at Tiffany's" with a new version of the song "Moon River," sung this time by Beyoncé and filmed in Super 8 by Jay-Z; all directed by Emmanuel Adjei.

You'll have to wait until early September to see the "About Love" campaign, which will be accompanied by a series of initiatives from Tiffany & Co. including a commitment to donate funds for programs at Historically Black Colleges and Universities (HBCUs). Additional components of the campaign are expected to be presented by the end of the year.

Tweets by @forbesindia
Photo of the day: Closer to God
YouTube counts over 2 million creators in its monetisation program