How the Indian craft of indigo dyeing travelled to Germany 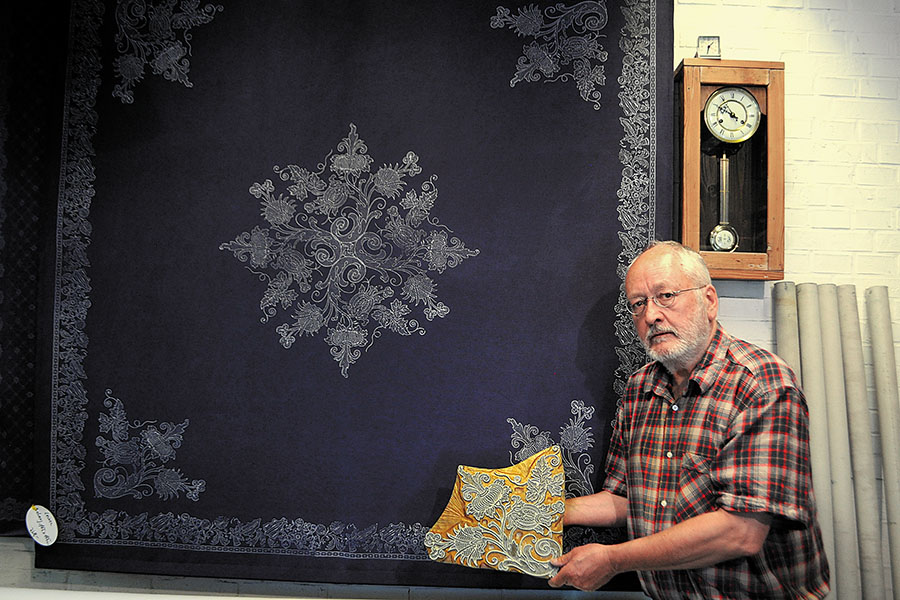 Georg Stark invests a lot of time and resources on tracing the history of dyeing as well as preserving the craft in Germany
Image: Amrita Das

Tucked away behind a pedestrian street in the city of Jever, Lower Saxony in Germany, is Blaudruckerei im Kattrepel, the workshop of Georg Stark. Tall, and in his 60s, Stark stands behind the counter of his dimly lit store, dressed in a blue-red checkered shirt and grey trousers, his deep voice blending in with the earthy ambience. For the last 35 years, he has been resist printing and indigo dyeing. His eyes widen when he hears I am from India. “The origin of taste, of fabric printing is India,” he says.  The relation of indigo and the Indian subcontinent goes back hundreds of years, with the Indigofera tinctoria species of the plant, also called true indigo, widely available in the region. Traditional forms of textile dyeing and printing extensively used this natural dye. In the 19th century, indigo was cultivated primarily in Bengal, with India being its largest exporter to European markets. The dye was immensely profitable to the East India Company, with British planters ruthlessly forcing farmers to cultivate more indigo by imposing strict and exploitative laws. Not only was indigo difficult to grow, but also very expensive; farmers were not allowed to grow food or other crops for which the soil was naturally fertile. In the 1820s, the British imposed tinkathia, a law that legally bound farmers to grow indigo in every three out of 20 parts of his land. The oppressive rules and regulations resulted in the Blue Mutiny of 1859-60, which was brutally suppressed. It was only in 1917 that the Champaran Satyagraha marked the end of this exploitation. This resistance movement was ignited by Mahatma Gandhi, who gave it a direction and escalated its prominence by travelling around the villages of Champaran district in Bihar and encouraging civil disobedience. The tinkathia law was eventually abolished in 1919.

Ulf Ahren has been in the business for 34 years
Image: Amrita Das

In recent years, indigo has gained significance in India’s handloom industry, with designers adapting it to contemporary weaves and fabrics, and adding a modern sensibility to its age-old use. Indigo cultivation has grown beyond the traditional boundaries of West Bengal, Tamil Nadu and Andhra Pradesh and towards the Himalayan foothills of Uttarakhand. “If we have to grow enough indigo again [to meet demand], or only make organic indigo from the plant, all of India and China have to be covered with indigo farms. It is not possible,” says Stark. “We have so many people in this world who wear jeans. They are all dyed with synthetic indigo.” The first synthetic indigo dye was developed in 1865 in Munich by Adolf von Baeyer, a German chemist who won the Nobel Prize in 1905. But what von Baeyer invented had to be worked upon—stabilised, made affordable, patented—before it could be used on a large scale. Baeyer sold his formula to Badische Anilin-und Soda-Fabrik (BASF), a German chemical company that sold the first indigo in 1897. By 1913, BASF’s annual sale of indigo touched 4,900 tonnes. It is estimated that BASF produces 40 percent of the world’s synthetic indigo. Although synthetic indigo dealt a body blow to the East India Company’s trade in the natural dye, Stark believes it is not a threat to the traditional craft of natural dyeing. “Handmade fabrics will always have special status,” he explains.                                                                                                ***** The walls of Stark’s workshop are lined with wooden blocks bearing relief patterns from Asia; paisleys and carnations make their appearance. He has a collection of 1,000 blocks from the last four centuries in his ‘living museum’. Most of these are being restored in his archive or are of higher historical and aesthetic value to him; they are not used for daily printing. Enthusiastically, Stark picks out a big wooden block with a pomegranate carved into it and holds it against its printed counterpart—a hanging table cloth. “Symbol of life,” he says with pride about this “precious block”, referring to symbolism of the fruit in Asian art. “I follow the old recipe,” Stark says, as he demonstrates how to stamp the green wax resist onto a white length of textile. “You need very strong arms,” he says, explaining that traditionally men were the ones to do the job. While a 50 mt of cloth had been rolled up to dry after being printed with the wax, the remaining 50 mt was stamped with these chunky wooden blocks, and prepared to be rolled and dried.

A wooden block which is placed against its printing counterpart
Image: Amrita Das

Once the printing is complete, Stark drapes the fabric on a circular, ornate wooden hanger and dips it into a cauldron of indigo mixed in water. This first round of dyeing lasts about 20 minutes; as the chemical gets oxidised, it first turns yellow, then green and finally blue. After the desired shade of blue is achieved by leaving the fabric in the liquid for appropriate lengths of time, the process of drying and ironing prepares the fabric for its end user. About 300 km from Jever, in central Lower Saxony is the town of Einbeck. At Ursula Schwerin’s shop, Einbecker Blaudruck, there are products in a bright array of yellow and red, apart from the customary blue. “For Christmas, people prefer red and green, and yellow in Easter,” she explains. The shop dates back to 1638, and is possibly Germany’s second resist printing and indigo dyeing workshop, started by Hans Wittram. In 2005, the shop was rented out to Schwerin and Ulf Ahrens by a descendant of the Wittram family. Today this family-run business stands in its second location, to which it moved in 1795.

Stark dips a cloth into a cauldron of indigo mixed in water
Image: Amrita Das

Stark invests a substantial amount of time and resources in researching and working with his “scientific friends” on tracing the history of his craft and keeping it alive. This community of researchers have found many old books, blocks and designs that go back 2,000 years and originate in India, opening up “an absolutely interesting cultural link to India”. While tourism boards contribute little to indigo dyeing associations in Germany, the inclusion of the craft in Unesco’s Convention for the Safeguarding of the Intangible Cultural Heritage list is a big push. Last November, Stark’s Blaudruckerei im Kattrepel, Schwerin’s Einbecker Blaudruck and related craftspeople in Germany, Austria, Czech, Hungary and Slovakia received accreditation certificates from Unesco, which help increase visibility and promotion.

I wonder why India, the home of indigo dyeing, has not been enlisted as a Unesco Intangible Cultural Heritage yet. Stark, who repeatedly mentions India as “the world of crafts”, takes pride in saying: “Porcelain from China, cotton from India, designs from India. Blue and white—we could not make it in Europe. So I keep this Indian tradition alive here in Germany.”

Tweets by @forbesindia
Solving the riddle of how companies grow over time
It's always a good time to have a sense of humour: Twinkle Khanna on Tweak India