Monaco's uber luxury hotels, restaurants and casinos justify its image of being the playground of the rich 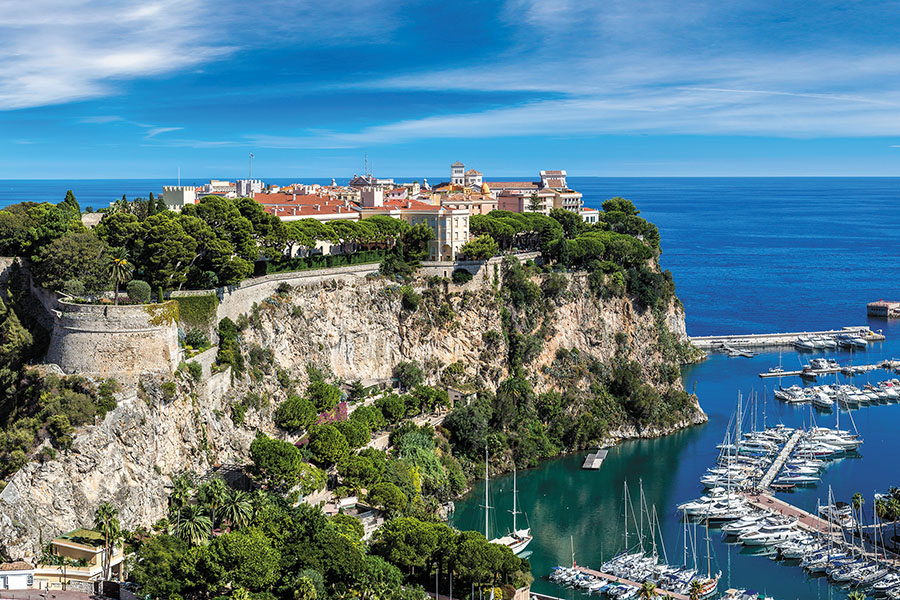 My arrival into Monaco this past November could not have been better designed. It was as if the planning and organisation teams had managed to convince the weather gods to ensure that the sun was exactly at the right place in the sky and the winds carrying just the right amount of waft as they welcomed me on my first visit to the French Riviera.

After taking off from Nice airport, the helicopter rose over the languid Mediterranean Sea, as the sun rolled out a golden carpet over its cerulean waters. The aircraft’s nose then tilted sharply downward as it dove straight ahead towards Monaco, the independent city-state that lies off the coast of France.

Nature’s magnificence quickly gave way to human imagination and ingenuity on the seven-minute ride as my whirly-bird banked to reveal what looked like a gorgeously built-up little coastal town. I had come to attend a musical event featuring the pairing of two world-renowned musicians: A Carnatic vocalist (and Bollywood singer) from India and a British jazz guitarist. But I had also come to experience a remarkably unique lifestyle, of a type of luxury that most people only get to dream about. 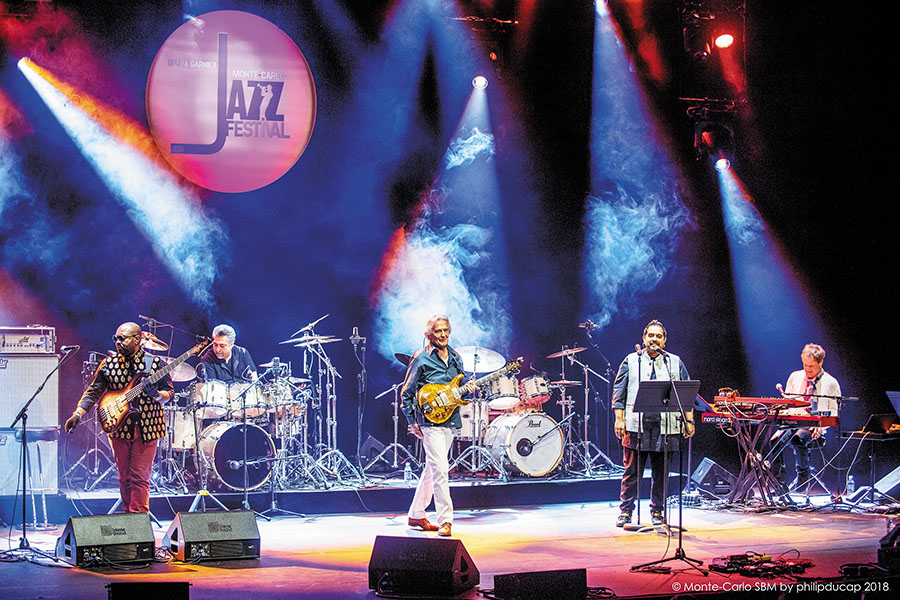 Shankar Mahadevan (second from right) and John McLaughlin (centre) at the Monte-Carlo Jazz Festival 2018
The world’s second smallest nation after The Vatican, Monaco’s total geographical area is contained within 2.02 sq km. That’s smaller than the neighbourhood of Bandra (West) in Mumbai, where I live. So is its population. At last count there were 38,400 residents in Monaco, of whom around 9,000 would be considered Monégasque—people either born or naturalised in the country. The rest are divided mainly between French and Italians, with a smattering of other nationalities. An additional floating population of 50,000 commuters come in to work every day.

The words ‘rich and famous’ have long been associated with Monaco. But this honeypot for the super-wealthy began, as nations usually do, with a fair amount of tumult. Following its founding at the turn of the 13th century, Monaco was buffeted for a few hundred years between Italian and French rulers and protectorates before it finally found its permanence as an independent constitutional monarchy in 1861. But its real fortunes began to turn only in the late-19th century, soon after the French casino magnate, Francois Blanc, was invited by Prince Charles III of Monaco to run the country’s first gambling venue.
The absence of any income tax, coupled with easy access to this nearly always balmy Mediterranean settlement, and an infallible commitment to its visitors’ privacy (long before the Las Vegas doctrine, ‘What happens in Vegas…’) ensured that the world’s wealthiest would frequently return to spend and to play. And there began the journey that transformed a minuscule agrarian colony into a nation that boasts the world’s lowest poverty rate as well as the largest number of billionaires per capita. Also, inevitably, some of the world’s most expensive real estate, where, not so long ago, a one-bedroom waterfront apartment in the Fontvieille neighbourhood was listed at $8 million. 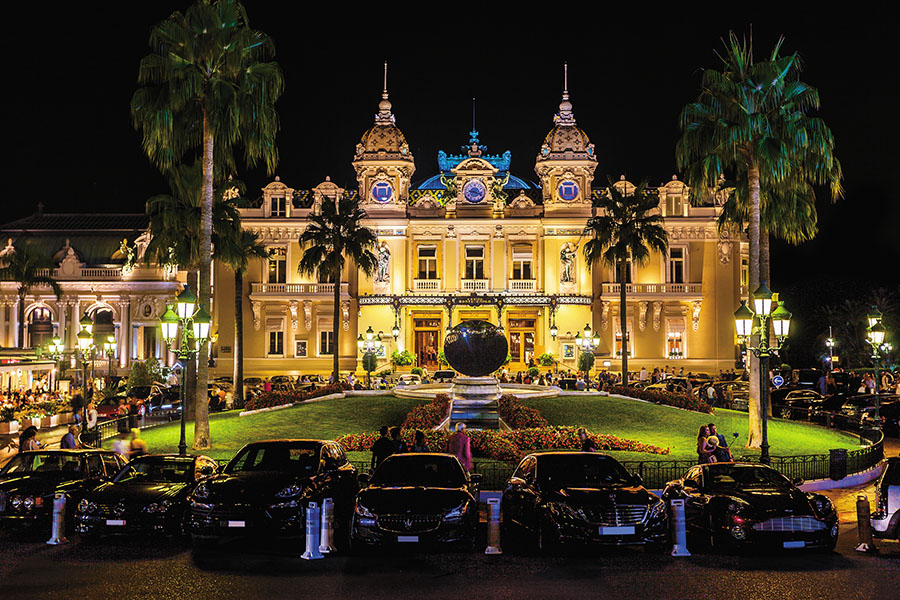 The Casino de Monte-Carlo is the world’s most-sought-after gambling destination
My cab made its way down the Rue Grimaldi—the boulevard is named after the family that founded and tenaciously fought for the parcel of land they were to turn into a country—and up the Avenue d’Ostende, before halting in front of one of the country’s most historic buildings: The magnificent Hôtel de Paris Monte-Carlo. That was going to be my home for the next few days. I took in the splendour of its gorgeous façade, and then went up to my room to drink in the staggering views of the Côte d’Azur.

The year 1863 was a watershed period for the then nearly bankrupt country. It was when Prince Charles III issued a royal decree founding the Société des

Bains de Mer (The Society of Sea Baths), or SBM, an association of entrepreneurs, bureaucrats and the monarchy. Under the guidance of Francois Blanc, the organisation’s first mission was to transform a little plot of olive and citrus trees into the world’s most luxurious resort destination. The SBM is still responsible for Monaco’s image, and owns and manages many of the country’s finest properties. The current prince, Albert II, is a shareholder.

When Blanc was handed the reins to the casino, he renamed it Casino de Monte-Carlo, after the ward that the transformed olive grove sat upon, and soon turned it into the world’s most-sought-after gambling destination. Its catchier moniker was to contribute to the tiny nation’s rapid ascent as a prized ultra-luxury resort. The Hôtel de Paris, built by Blanc and his wife Marie, was to house and cater to the desires of the casino’s most valued players and the country’s most eminent visitors, which included the likes of the Prince of Wales, Alexandre Dumas, Charlie Chaplin and Salvador Dalí. 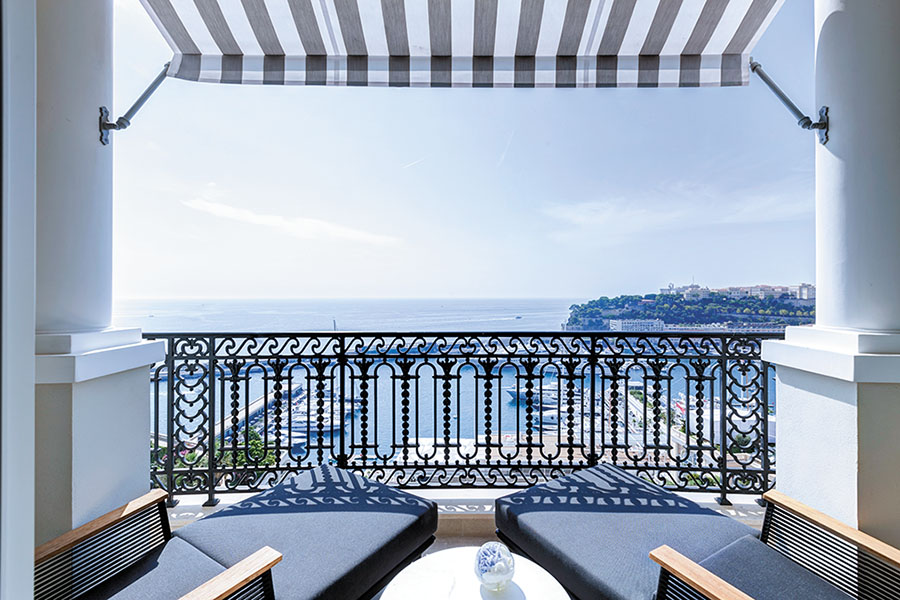 Hôtel de Paris offers spectacular views of the Côte d’Azur
The hotel also became home to one of the world’s finest restaurants. Almost 120 years after its opening, Prince Rainier III issued a challenge to Alain Ducasse, a 31-year-old rising star in the French culinary world, to run Le Louis XV, the hotel’s flagship restaurant, on the premise that he bring it three Michelin stars within four years. Ducasse achieved this feat in just under three, making it the first ever hotel-based restaurant to win the coveted imprimatur. It still has them. And it was the venue of my first dinner on the Riviera.

Helmed by Ducasse’s protégé Dominique Lory, the restaurant’s philosophy centres around the region: Fish and seafood from the Mediterranean, vegetables and herbs from neighbouring farms, meats, poultry, cheese and olive oil from local artisanal producers. Every morsel I bit into—from the amuse-bouche comprising tiny pieces of fresh, unmessed-with fish paired with the most delicate of herbs and condiments, through the main course featuring lamb with red squash and glasswort, to the expansive cheese platter bearing the region’s finest fromages, all the way down to the gâteau molleux au chocolat (a chocolate cake so divine it needs to be spelt in its original language)—were formidable, redoubtable and exquisite, bearing all the standards that a tri-starred restaurant is held up to.
*****

It was a pretty good start to the main reason I was there: To experience another spectacular pairing of sorts. The following day, Bollywood composer and virtuoso Carnatic singer Shankar Mahadevan was to be the star guest performer with the legendary British jazz guitarist John McLaughlin at the Monte-Carlo Jazz Festival. The collaboration was to take place in another iconic building—the Opéra de Monte-Carlo. The gr and concert hall, exquisitely designed by French architect Jean-Louis Charles Garnier, already famous for Paris’s celebrated opera house the Palais Garnier, opened in 1879 as an extension to the Casino de Monte-Carlo, with the intention of offering refined culture and entertainment to the nation’s visitors and high rollers. As I took my place in the 500-seater hall, I felt as if I had time-travelled to a long-past era.
A large chandelier presided over the ornate figures and frescoes that adorned the ceiling and walls. Tightly placed rows of burgundy, velvet-covered seats sat patiently in wait for the audience to occupy them. The band made its way on to the stage to enthusiastic applause—McLaughlin has long been loved in the European jazz scene. The audience sat in thrall as they were treated to an hour and a half of two diverse musical traditions by some of the world’s most proficient exponents of those forms.
Classical Indian modes and ragas interleaved adroitly with Western jazz voicings and rhythms as Mahadevan and McLaughlin revisited their past collaborative explorations with the band Remembering Shakti along with some of Mahadevan’s own work, as well as newer interpretations of material from McLaughlin’s pathbreaking ’70s jazz-rock outfit The Mahavishunu Orchestra. The guitarist’s touring band, The 4th Dimension, comprising Etienne Mbappé on bass, Gary Husband on keyboards (and drums for one song) and Mumbai’s own musical stalwart Ranjit Barot on drums, displayed a collective tightness and individual virtuosity that left the audience demanding encore after encore, to which the band graciously obliged. It was a truly memorable concert in an appropriately unforgettable setting.

For the rest of my stay I made the most of the Riviera’s salubrious climes. While much of Europe chills over in winter, Monaco’s perennially temperate weather welcomes visitors all through the year—it rarely exceeds 24 degrees Celsius during its hottest months or drops below 10 degrees Celsius on its coldest days.

Walking along the marina, I gazed at tricked-out yachts. I slurped down fresh Mediterranean oysters on the half shell and chewed on calf’s liver with bacon at the famed Café de Paris while quaffing glasses of champagne with new friends.
At the Casino de Monte-Carlo, I briefly channelled my inner spy—though there were no martinis in view or rogue governments to plot against—given that the James Bond classics Never Say Never Again and GoldenEye were filmed in these hallowed high-stakes rooms. Or was it my imagination stoked by those old-world rooms that once carried the fragrance of Cuban stogies and expensive French parfums? Maybe it was triggered by one of the many cars parked outside that could well have been Bond’s Aston Martin.

As I took in the chill evening air, I could see why anyone with a betting spirit and a bank balance that can handle the stakes would want to return to this haven of luxury, taste and privacy. You don’t even have to set your fortunes on the table. Those 2 sq km contain plenty of ways to slake your most rarefied desires.