Colonel Srinivas Gokulnath has undertaken some of the most daunting cycling challenges in India; now in South Sudan as a part of the UN Peace Corps, he teaches displaced young girls how to cycle, giving them a taste of freedom 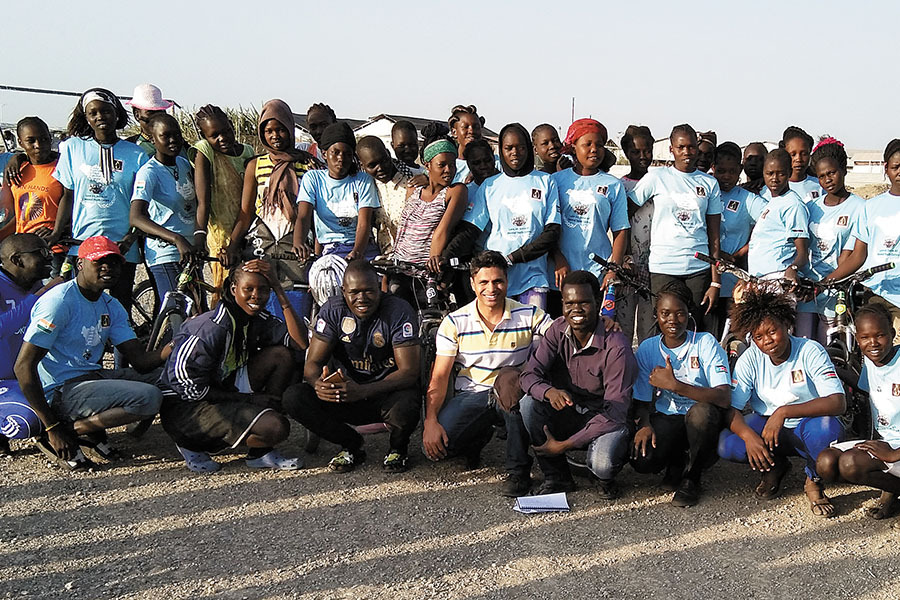 Over the last decade, Colonel Srinivas Gokulnath, 38, has taken on some of the most challenging cycling projects in India and around the world. Whether it’s riding 4,000 km from Leh to Kanyakumari in 2014, or as the first Indian to finish the gruelling Race Across America (RAAM) three years later, endurance cycling is a passion project he has chased alongside a successful career in the Army Medical Corps. All that changed in March 2019 when Gokulnath was deployed in South Sudan as part of the United Nations Peacekeeping Force. He found himself in one of the youngest countries in the world—South Sudan earned its independence in July 2011—which is struggling with internal strife and ethnic violence, the repercussions of a brutal seven-year civil war that started in 2013. A 2018 report by the London School of Hygiene and Tropical Medicine pegs the casualty of the civil war at 3,83,000, which also includes deaths due to diseases and malnutrition. Clearly, Gokulnath had his hands full. His personal ambitions were momentarily put on hold; and yet, it didn’t mean putting a stop to cycling. Since June last year, he has used cycling as a means to bring about positive changes in the lives of the girls in Malakal, the second-largest city of South Sudan, which is around 500 km north of its capital, Juba, where he is posted. 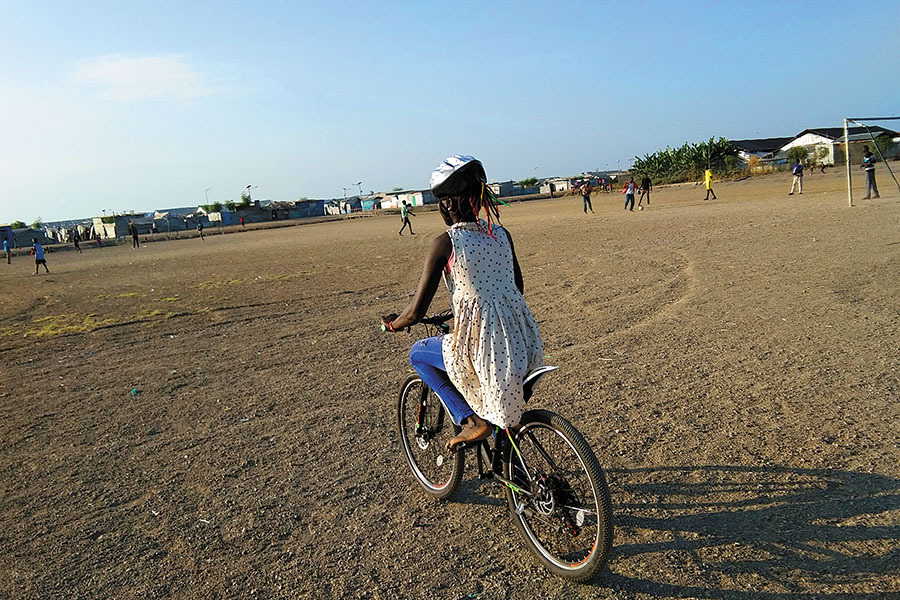 Each weekend, the football ground turns into a cycling arena of sorts for girls aged between 12 and 20  “Before the 2013 conflict, Malakal was a flourishing town with many universities, medical schools and an international airport. But the mass destruction didn’t spare anything or anyone. It was evident from the moment I landed in Juba. The road towards the United Nations camp in Malakal also had tell-tale signs of war,” Gokulnath recalls. A short distance from his base in Malakal is another camp for Internally Displaced People (IDP). It houses around 35,000 people who have been displaced from their native villages due to the civil war. As of October 2020, the United Nations High Commissioner for Refugees estimates there are 2.18 million refugees and asylum seekers from South Sudan. “Life is tough in these camps—a constant struggle for food, water and shelter. A lot of people suffered massive loss of life and property due to the civil war. I realised how lucky I was to be on the other side,” says Gokulnath. “Being a doctor, my primary task is to render medical care to the patients evacuated by air. At the same time, I felt a moral responsibility to bring about positive change in the lives of the people.” Gokulnath had grown up in Devasandra, a suburb of Bengaluru, where as a child he would take his father’s bicycle and go exploring the neighbourhood. But he is no stranger to enduring hardships and taking on personal battles, from which he’s bounced back time and again. In 2006-07, he spent six months on the Siachen Glacier, tending to frostbitten soldiers and rejuvenating their spirits in the harsh mountain environment. During another posting in Kashmir in 2012-15, when cycling outside army camps wasn’t an option, he would train on a rough track within the camp to prepare for the demands of ultra-cycling. He even waged a lonely battle for 11 days in 2016 during the RAAM, a 4,828-km coast-to-coast cycling race. Unfortunately, he became so fatigued during the 12-day race that he failed to keep up with the race cut-off times and eventually had to pull out. The disappointment only made him more determined, and once back in Nashik, where he was then posted, he trained resolutely for long hours while balancing his day job. The following year, he went back stronger to create history for India, by becoming the first countryman to finish the event. When he arrived in South Sudan, the lack of metalled roads and security concerns made it evident that riding outdoors was not an option. Yet, he continued cycling on an indoor turbo trainer to keep himself fit for future races. Once he settled into a routine, he decided to go beyond the call of duty to bring relief to a community in distress. 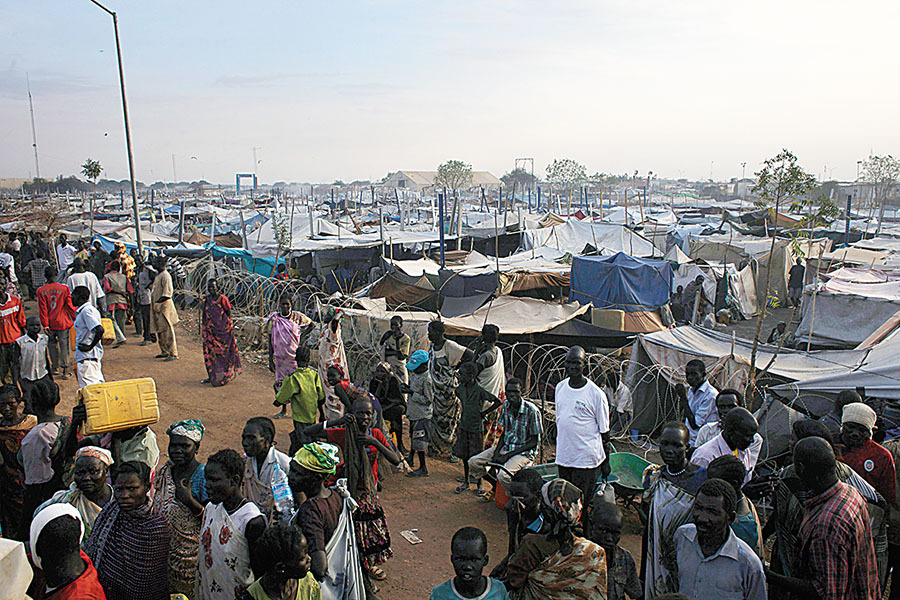 Gokulnath has also started a meditation and yoga programme for youths displaced due to the civil strife in South Sudan. He feels the restive youngsters have to have a calm state of mind if the peace-building process is to work
Image: Andreea Campeanu/Reuters  Gokulnath realised the plight of youngsters, who had little to look forward to. A month after his arrival in June, he started a meditation and yoga programme each weekend at the IDP camp’s youth centre, which saw a hundred youngsters coming in by November. “For the peace-building process to work, I firmly believe that the minds of youngsters need to be in a calm state. During the first few days, they found it strange to sit quietly in one place, but they were always interested in learning. They soon started enjoying the sessions, a few even going on to teach others once they got a hang of it,” he says. Once he started mingling with the residents of the camp more frequently, he gained an understanding of the status of women in South Sudanese society. He realised that though they were hardworking, willing to learn new skills and had a progressive outlook towards education, there were a number of taboos associated with them. “Despite their position in society, they didn’t hesitate when it came to welcoming any kind of change for their upliftment,” he says. According to Gender Concerns International, women comprise 60 percent of South Sudan’s population—a consequence of the relentless conflict over the years that has resulted in high male casualties. Over 90 percent of women are illiterate, while 50 percent of girls are married off by the time they are 18. With 51 percent of the population under 18 years, Gokulnath made up his mind to take cycling to the girls. “Riding a bicycle is a kind of taboo for girls in South Sudan. I was unsure about the girls’ willingness towards the idea. But on the first day, over 50 girls showed up and I had just three bicycles to work with,” he says. Each weekend, the football ground at the youth centre was transformed into a cycling arena of sorts. After the first few sessions, the girls hopped on to a bicycle and pedalled off tentatively, often bumping into each other and eventually falling. A few ended up with bruises, but would be up in a jiffy, dusting off their clothes with a big smile. Their energy was infectious, enough reason for Gokulnath to consider raising funds to source more bicycles. He launched the ‘Girls Ride A Bicycle’ fundraiser last November, where he ran 96 km (in laps around the perimeter of the camp) in 12 hours and raised $1,500 from UN staff and humanitarian agencies to buy 14 bicycles. 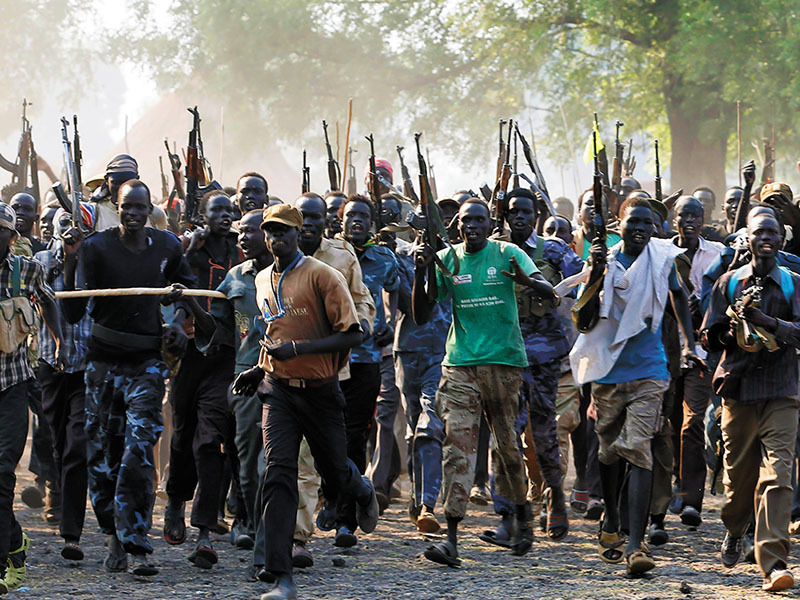 Image: Goran Tomasevic/Reuters  “It’s the longest I’ve ever run—all night, from 6 pm to 6 am. Once we had the bicycles, around 20 girls started coming in each week, and by this March we had around 100 who were proficient in cycling,” Gokulnath says. For the girls, aged between 12 and 20, cycling has been liberating, with a few of them riding as far as 20 km around the camp on occasions. “I can commute anywhere I want to without being dependent on anybody. Cycling to me means freedom,” says Cecilia (14), who has been at the camp since 2013 and has been cycling for 15 months. When Covid-19 brought a temporary halt to the on-ground activities, Gokulnath used the time to plan ahead. Once the situation in South Sudan gets better, he hopes to take the girls on an East African bicycle expedition, besides facilitating the construction of an outdoor gymnasium. “I have discovered that there is so much joy in giving, rather than taking. The purpose of life is to make a positive impact in the lives of others,” Gokulnath says.

Tweets by @forbes_india
Photo of the Day: Vaccine entourage
South African coronavirus strain: What we know so far