Travel: A unique tour of a former 'student prison' in Germany

At Heidelberg University, the 'prison' is a glimpse into the fun and philosophy that shaped young minds over many decades 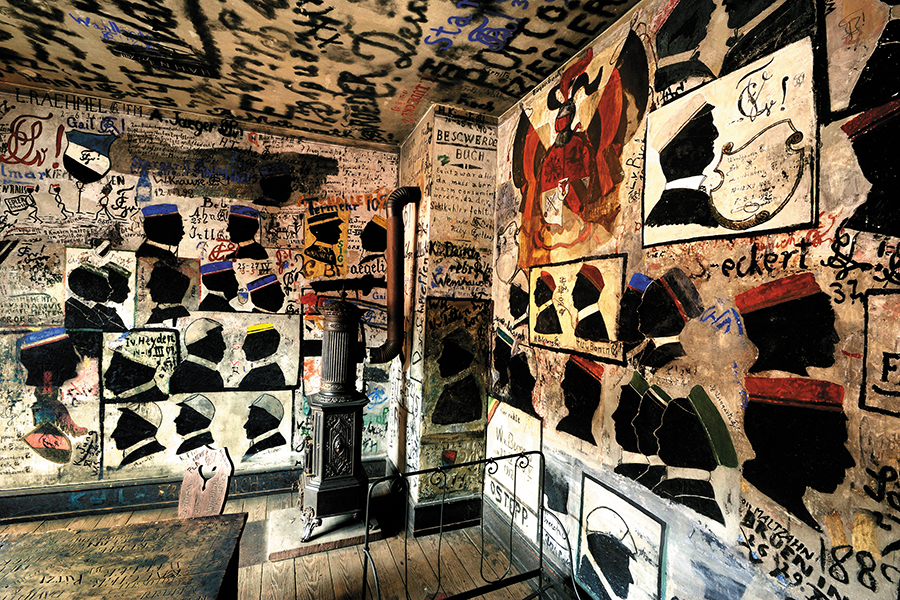 The walls of the student jail at Heidelberg University are covered with drawings and graffiti
Images: Albert Ceolan/De Agostini Picture Library Via Getty Images


Walking into Heidelberg’s Old Town is like walking into a page of Grimm’s Fairy Tales, and half expecting to see a princess climb down from a tower. Half-timbered (wooden frames held together by pegs) and Baroque facades, church spires that tower over clusters of red roofs, and the evocative ruins of a red sandstone castle that looms on the hill, framed by distant forests. Unlike many German cities, “Heidelberg was not destroyed by bombing in World War II and that’s why so many buildings have remained intact from the Middle Ages and early Renaissance period,” explains our guide Dino Quaas. Down the ages, the city has attracted artists, philosophers and writers, from German writer Johann Wolfgang von Goethe to American novelist Mark Twain and English painter William Turner. Today the city is well known as a scientific hub, especially for research being conducted at the German Cancer Research Centre.
Through the ages, Heidelberg has been ruled by the Celts and Romans, and then the Palatine Electors of 13th to 18th centuries, powerful princes who were king-makers. It was in this town that the famous jawbone of homo heidelbergensis, the earliest evidence of man in Europe, was discovered in 1907. Today, this city in the Rhine Rift Valley has around 160,000 inhabitants, where one in every four residents is a student. It sprawls over an area of 108 sq km. What the town is most famous for, however, is its esteemed university, and its students. Established in 1386, Heidelberg is Germany’s oldest university, with as many as 55 Nobel Laureates having studied, taught or worked there. It is also the city’s largest employer. 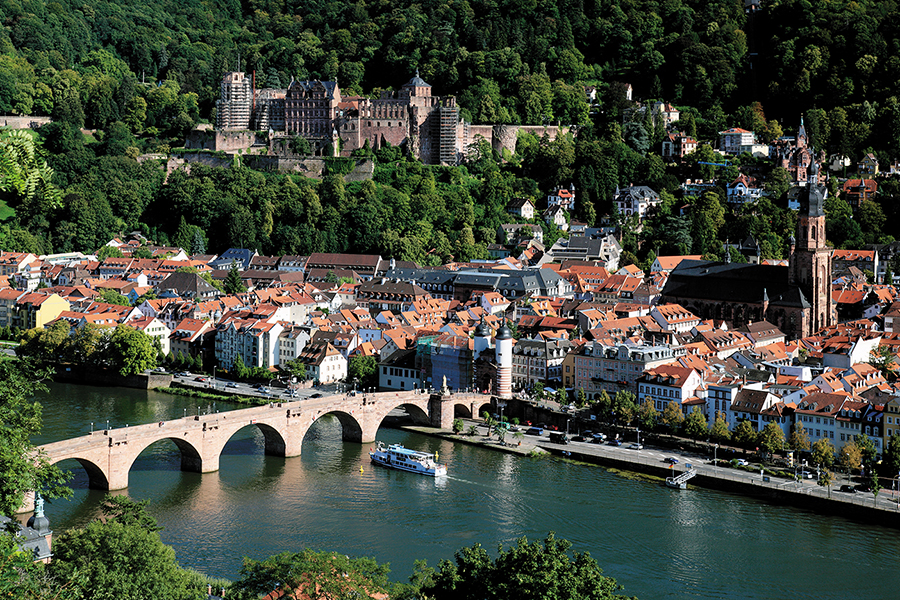 The Heidelberg University sprawls over three campuses today, with the Humanities department located in the University Square of the Old Town. The Old University building was constructed between 1712 and 1728, and has the Rector’s office as well as the University Museum. Close by is the ornate sandstone Renaissance building. Built in 1905, its architecture has elements of Art Nouveau, and it houses the University Library. On the first floor of the Old University is the Great Hall or the Aula Magna. Dating back to 1886, its awe-inspiring interiors have wood-panelled walls, frescoes and chandeliers. It is still used for concerts, performances and lectures, and is lined with the statues, busts and paintings of people who have contributed to the university over the years. On the ceiling are beautiful frescoes depicting the four faculties of the university: Theology, law, medicine and philosophy. 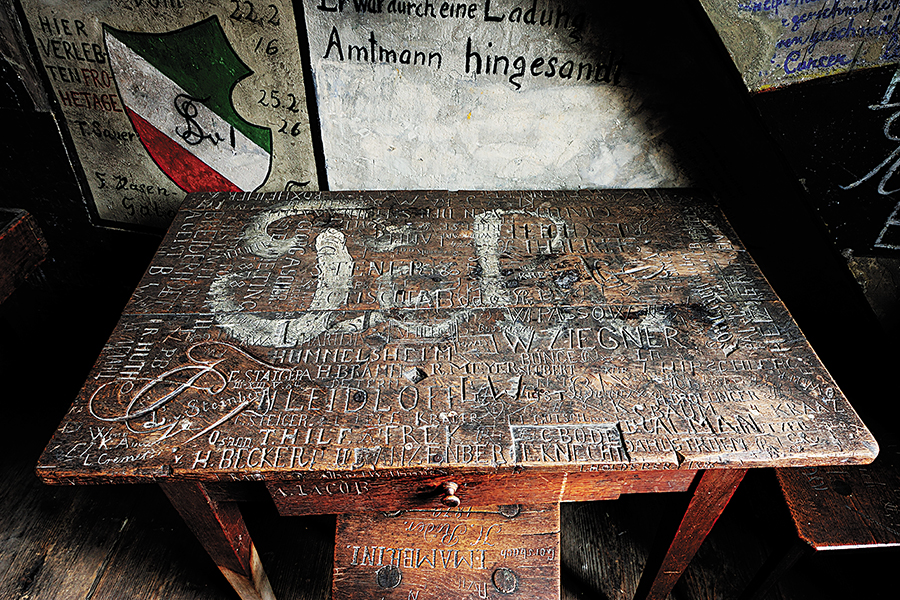 Wooden tables in the jail were a canvas for poems, clever epithets and cartoons
Image: Albert Ceolan/De Agostini Picture Library Via Getty Images

Amid this legacy of history and heritage is the rather quirky Studentenkarzer or ‘student jail’, which Dino recommends. Located behind the Old University in Augustinergasse, it is now open to tourists. In the past, it was common for German universities to have a ‘karzer’ or jail, where rowdy students got detention for being troublemakers. The on-campus jail was used from 1778 to 1914, and was like a restrictive dormitory meant to punish students (only men, as women were admitted to the university only after 1912) for offences such as drunkenness, breaking streetlights, singing on the streets, fencing duels and freeing pigs belonging to farmers (a common offence of those days). If a student was found guilty of any misconduct, the university would conduct a hearing; and if proven guilty, the student would be sentenced for a period ranging from three days to four weeks to the prison. In fact, when Mark Twain visited Heidelberg in 1878, he was astounded that the university had a prison. Subsequently, in his 1880 book, A Tramp Abroad, he mentions the “The College Prison” and that “the rooms had a hard bed with a straw mattress, a chair and a heater as well as a window with an iron grille”. Inside the erstwhile prison, a stone staircase leads to the dimly lit old jail on the second floor, with every inch of the walls covered with drawings and graffiti. A plaque explains that the jail was a rite of passage for most students, and it was fashionable to have had a stint there. It is said that some students would even deliberately commit petty crimes so that they could spend a day or two in there. With relaxed rules, food for the first few days was just bread and water, but after that the conditions were not too arduous. The students could attend lectures by going to their classes through a special passage that connected the jail to the university; they could invite guests, bring in food and spend the rest of the time in their private cells. The delinquents spent their time decorating the walls of their temporary abode, playing card games and discussing politics with other students. During the later years of the prison, students would even invite friends and have a jail party! 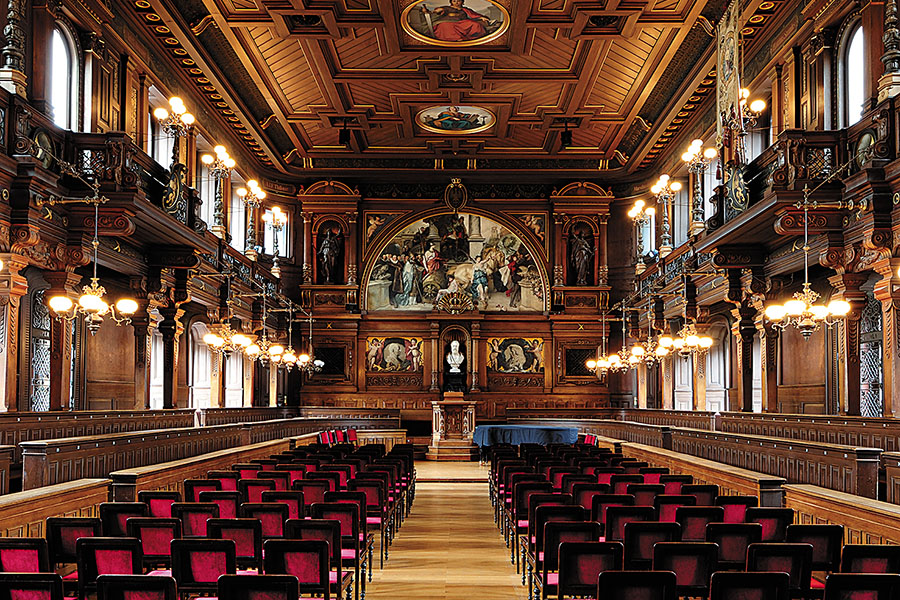 
Some of the cells have spring beds and wooden tables carved with graffiti, their walls and ceilings are a canvas for scribbled poems, protests, clever epithets, cartoons, names and dates of incarceration, silhouetted portraits of students wearing red caps that were a part of the uniform in those days, and drawings of fraternity badges. One wall has lyrics for a song and the music for a sing-along. Most of the writing is in German, and Dino translates a few for me. “Abandon every hope, you who enter,” says one from ‘Inferno’, the first part of Italian writer Dante Alighieri’s 14th century epic Divine Comedy. Another graffiti, accompanied by the portrait of a group of five friends etched on the walls, says they were just being honest, and trying to do the right thing “by returning bricks found on the street through the window”. Black and red seem to be the predominant colour palette, with some pops of green and blue. At first, the students used to use candle soot and ink, and anything else they could lay their hands on to draw on the walls, but after some time they came prepared with paints, crayons and other tools. Another streak of creativity and humour lies in the naming of each room—from ‘Solitude’ to ‘Palais Royale’. The bathroom, with a wooden toilet seat, is called the ‘Royal Throne’. It was only by 1914 that the university officials realised that the student prison was not serving its purpose of making students repent their actions, and in fact it was making a mockery of the punishment system. The jail was also overcrowded, and the university thought it was not worth punishing them for minor misdeeds anymore. Hence, the prison was closed.

Traditions around Heidelberg continue to celebrate the presence of the university and its students in myriad ways. For instance, back in Old Town, I taste my first ‘Student’s Kiss’. In 1863, Fridolin Knosel, who owned a café, created a chocolate treat that students could give to young women who were attending finishing schools, as a token of affection in an era when public display of romance was discouraged and the women always had a watchful chaperone. If the woman accepted the Student’s Kiss, it indicated that she would like to get to know the young man. Today, shops in Heidelberg still sell this delicious, praline nougat covered in dark chocolate, wrapped in paper emblazoned with the image of a student with a red cap. Then there is the Zum Roten Ochsen, a family-owned pub painted red with blue window shutters and housed in a building that dates back to 1703. This historic student pub has sepia images of fraternity clubs on its walls, and names of students carved on to tables. With live piano music, it has hosted visitors such as Elvis Presley. I enjoy my meal of Käsespätzle (cheese-covered noodles) and a glass of local beer, which seems like the appropriate way to end a day spent on the trail of the students of Heidelberg. At night, the raucous Unter Strasse is lined with open air bars, restaurants and cafes. The vibe is electric, with coloured lights, and the sound of young laughter ringing down the narrow street. In the distance, the castle on the hill stands silhouetted against the indigo skies. The past and the present segue seamlessly at that moment.