Travel: In Ethiopia, psychedelic lands that feel like Mars

In the country's north lies the Danakil Depression, a surreal landscape showcasing the operatic rendition of nature, red and orange and yellow in tooth and claw 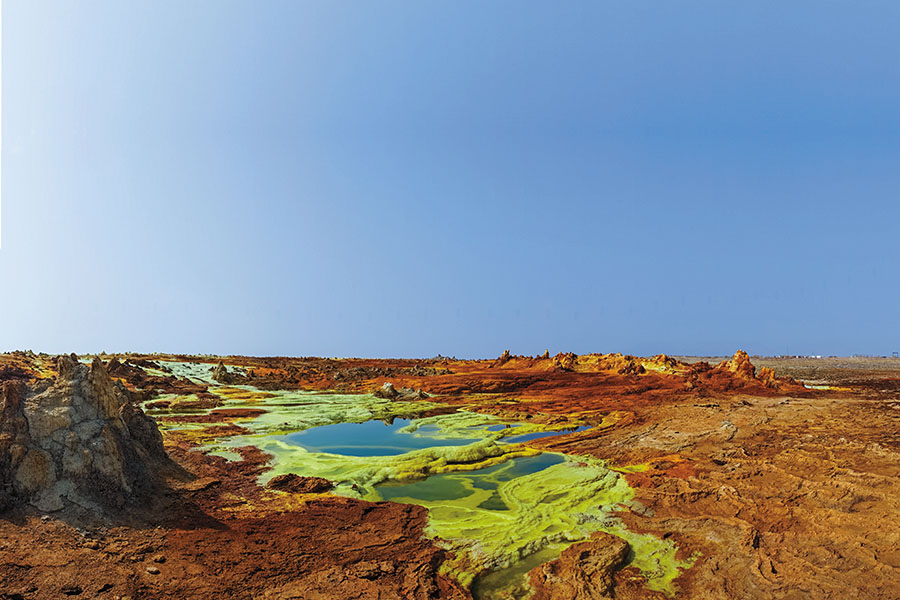 The colourful volcanic landscape of Dallol in Ethiopia’s Danakil Depression
Image: Eric Lafforgue/ Art in all of us/ Corbis via Getty images

The ground erupted like kernels of buttery popcorn, crunchy to the touch. A haze of crimson and orange dirt surrounded us. Pools, the colour of disco lights, shone in the distance and whistling sulphurous vapours escaped from the ground. One weekday morning in May, I looked at this operatic rendition of nature, red and orange and yellow in tooth and claw, and couldn’t look away. I had taken an incorrectly booked flight, an 11-hour road journey, a stop at the wrong hotel, endless power cuts and myriad other travellers’ troubles to get here. But riding on the back of those traumas and mishaps we were here now, and Africa’s psychedelic Dallol lay in front of us.

It felt like Mars, with its unfamiliar shapes and shades. Indeed, a paper in the science journal Astrobiology in March called it “an excellent Mars analog environment”, likening its conditions to our neighbouring planet. Dallol is a volcanic crater in the Danakil Depression of northern Ethiopia, one of the hottest, lowest places on earth. “The region”, the paper said, “is notable for hosting environments at the very edge of natural physical-chemical extremities.” Extremities is the right word. Even the microbes that survive here in these conditions are known as “extremophiles”. Superlatives attach themselves easily to Danakil: Land of the highest average year-round temperature, host to one of the most acidic natural systems, receiver of among the scantiest amounts of rainfall. To this I could add another: Unlikeliest place on my itinerary.

Until arriving in Ethiopia I hadn’t even heard of the Danakil Depression, let alone foster any desire to go there. Emerging from a complicated and violent history, the northern parts of the country were tense until recently because of the shared border with Eritrea, a breakaway country sundered from the coastal edge. Hunger and famine marked the 1980s, while a refugee crisis still bubbles internally. Ethnic tensions continue to thwart lasting peace. 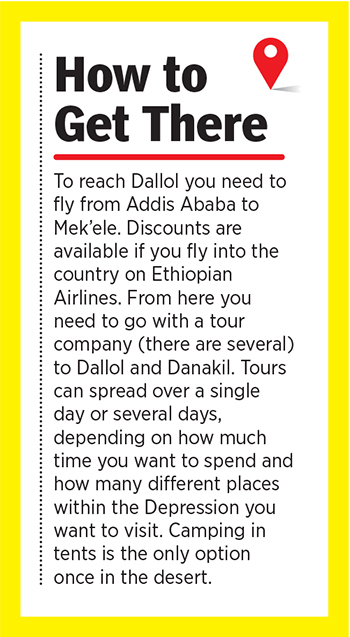 The Ethiopian capital of Addis Ababa is a fast-growing city in the centre of the country. But the good stuff lies outside—rock-cut churches, holy relics, wildlife and volcanoes. So after being shamed by a colleague for avoiding the long and expensive trip north, a friend and I had succumbed to the idea, seduced by Google images and the possibility of bragging rights. Our trek to Danakil started from Lalibela, a tiny town from where unevenly motored roads brought us to Mek’ele, the base for visitors to the region. “Enjoy the African massage,” Gechu, our driver had warned, as our bones shook with the rattling over the roads. “It’s free of cost.” Nine hours later, we collapsed on the bed, demanding the universe serve up something more than just a free massage. The next day began at 4 am, when we groggily turfed ourselves into a waiting Land Cruiser, sleeping until we reached the pitched tents at the breakfast pit stop in the desert. The area used to be a military base camp, we were later told, and was vacated by the troops after the recent reconciliation. Though we didn’t have time to climb Erta Ale, the active volcano nearby, we would be taken through a range of weird and wonderful natural formations.  A cavalcade of Land Cruisers left together, Mad Max-esque in their foray through the barren landscape. The pockmarked earth unfolded in front of us; but for a brief burst of shrubbery, dubbed the “toilet”, there was little by way of vegetation. We were about 125 metres below sea level. Thirty minutes and one flat tyre later, we got off, following Michael, our guide, as he led us through the parched terrain, clutching our precious water bottles.

The vista changed gradually, perceptibly. From rocky outcrops surrounding us, to fungi-like gravelly mounds underfoot, to the slow coloration. Ahead, Michael pointed to some worn-out structures an Italian company had set up when they tried to mine potash in the 1920s. The ground below bubbled and belched in places like a dissatisfied pressure cooker, leaving sediments that form crusts like egg shells. It smelt like a laboratory, pungent with the signature notes of chemical decomposition and gutter water. As the morning and the walk wore on, the landscape began to colour itself in, turning dark brown, then maroon, then vermilion, saffron, yellow, green. Fifty shades of incredible; a thousand kinds of memorable. When we intermittently regained our powers of speech we could do little besides congratulate ourselves for getting here and nature for doing a damn fine job. What special brand of black magic conjures up these striking colours at earth’s end? Lying at the junction of three drifting tectonic plates, in an active volcanic region, it comes down to a cocktail of sea salt, volcanic magma, sulphur and water reacting together. The magma heats the ground water which, as it rises, absorbs various minerals; when the water evaporates, these crusty deposits and hallucinogenic formations remain. It is in this primal geological laboratory of the depression, that scientists have discovered remains of our earliest human ancestors, helping piece together the story of evolution. The Danakil Depression goes across Ethiopia, Eritrea and Djibouti, as part of the East African Rift Valley. As the tectonic plates incrementally continue to pull apart, it will eventually, millions of years from now, be submerged in the Red Sea. No wonder then that from time to time Michael warned us about the fragile ground beneath our feet; this was after all a terrain constantly in the process of making and remaking itself. Once sated on the Technicolour show, we returned to the vehicle with the faces of people who had won the tourism lottery.

The next stop was the salt mountains: Wizened mushroom-like mineral protrusions emerging from the earth. A thin, wiry man with a gun crouched on the rocks on his haunches in a traditionally-patterned lungi-like skirt, scanning the world around him. “The local people help protect the area,” Michael said. “It also lets them feel involved. That’s how tourism should be, right?” Later we stopped at acidic pools, which at first glance did not appear especially fatal. People stuck their hands into the warm water, and emerged unscathed. This was not true for the avian life in the area though. “Birds come to take a sip of water, thinking this is an oasis in the desert, but then it kills them,” said Michael. As we walked around the shallow pond, he took us towards a small rocky alcove, where dozens of birds lay stiff and catatonic, dead from their misadventures. He called it the bird cemetery.  As the sun rose overhead, we drove through the salt pans, the fierce white light bouncing off the ground. The tour itinerary had claimed we would spot members of the Afar tribes mining salt around here and camel caravans transporting the goods, but no one seemed visible today aside from tourists. “Ramadan has just begun, that’s why,” explained Michael. 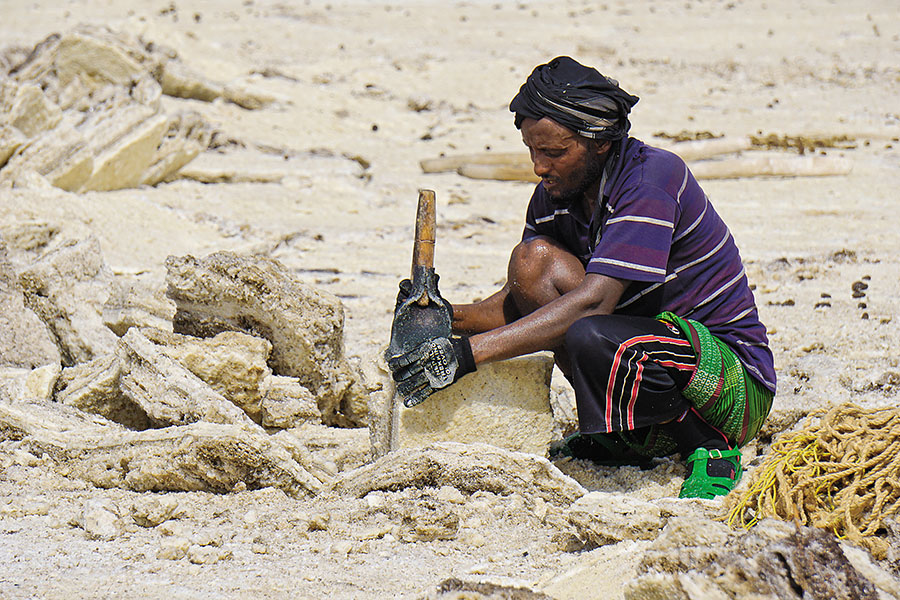 A worker from the Afar tribe cuts salt into blocks near Asale Lake in the Danakil Depression; Image: Shutterstock

The last stop was Asale Lake, spreading itself like a small ocean, sky meeting water body, a clash of two shades of pale. We waded through the shallow edge, the sodium chloride announcing itself by scalding open wounds on my feet. The wind whipped incessantly. Glimpses of Eritrea reared up in the distance. The crunchy floor of salt was everywhere, crackling with every step. I had never been submerged in a natural sensorium quite like this before, and suspected I would perhaps not again. Our final stop was at a small shack for lunch. Stacked plates of pasta arrived along with profusely sweating bottles of chilled beers. We were sleep-deprived, sun-baked and sweaty, but for now we had the bitters in our throats, the bragging rights in our pockets, and the colours still swirling in our eyes.