The video game, still in its original packaging, and was sold at $60 apiece when it was first released in 1996 and went on to become the bestselling game for the Nintendo 64 console 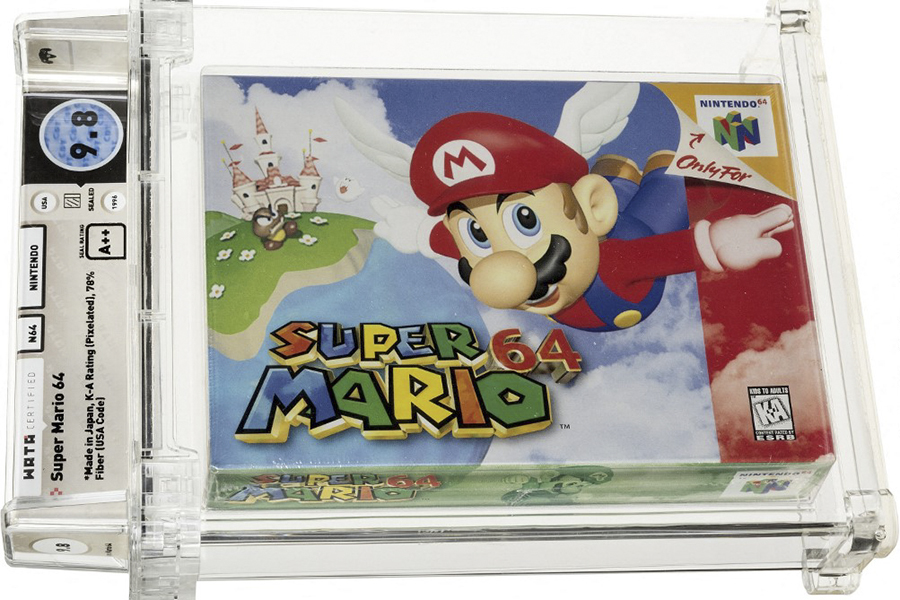 A cartridge of Nintendo's classic video game "Super Mario 64" set a world record on July 11, 2021, selling at auction for $1.56 million. The sale, the first ever of a game cartridge to surpass $1 million, came just two days after a sealed copy of "The Legend of Zelda," made for the old Nintendo NES console, sold for a then-record of $870,000. Dallas-based Heritage Auctions, which handled both sales, has not identified the buyers
Image: Heritage Auctions

An anonymous buyer has paid $1.56 million for a 25-year-old copy of Super Mario 64 in its original packaging, a record price for a video game, according to the auction house that sold it.

Heritage Auctions said that it received 16 bids leading up to and during the live auction Sunday for the mainly pristine condition 3D Super Mario game, which sold for about $60 when it was released in 1996 and was the bestselling game for the Nintendo 64 console.

The top bid was $1.3 million, according to Heritage Auctions, which added a buyer’s premium of 20% to the gavel price to bring the total to $1.56 million.

The price sent shock waves through gaming and collecting circles, even after a recent uptick in five- and six-figure sales of rare video games to investment-minded buyers. The sale was announced just two days after Heritage Auctions said that an early production copy of The Legend of Zelda from 1987 had sold for $870,000.

Valarie McLeckie, the consignment director for video games at Heritage Auctions, said Monday that she was astounded by the outcome of the Mario 64 auction.

“I was blindsided, to be quite honest with you,” she said. “Never in my wildest dreams did I expect the price that was realized would become a reality.”

The game, which was part of a private collection, is sealed inside a clear plastic case resembling the anti-theft boxes used by retail stores. It includes a certification from Wata Games, an authentication company, attesting to its “like new” and factory-sealed condition, in its original shrink-wrapping.

McLeckie said that video game characters often evoke a sense of nostalgia, particularly Mario, who, with his brother, Luigi, first appeared on the screens of Nintendo players in 1985 in Super Mario Bros.

In the original game, Mario must save the peace-loving Mushroom People from the Koopa, a tribe of turtles known for their black magic. The game spawned an enduring theme song and multiple variations, including Super Mario 64, in which Mario faces an array of obstacles and adversaries as he tries to rescue the kidnapped Princess Peach from the villain Bowser.

“He’s like the Mickey Mouse of video games,” McLeckie said of Mario. “He’s just so recognizable and really resonates with a wide audience of people.”

Chris Kohler, a video game historian and the editorial director of Digital Eclipse, a video game studio that makes collections of classic games, said Monday that he would have expected an older video game to contend for the sales record. He said that collectors could find copies of Super Mario 64 — not in mint condition but with the original box — for much less.

“That was what kind of blew me away about that sale,” he said.

Kohler said he remembered spending part of his first paycheck on Super Mario 64 when it was released.

“If you had told me at that point that somebody was going to buy a sealed one for $1.5 million in 25 years’ time, I don’t know what I would have done,” he said.

Many buyers are new to collecting video games and have crossed over from comic books and coins, according to Kohler.

Don’t expect an unboxing video from the buyer, whom the auction house declined to identify. McLeckie laughed when asked whether the collector would actually play the game.

“I can say with certainty they’re going to leave it as is,” she said.