Over the years, the United States provided the Afghan military with a huge array of arms and vehicles, including M4 carbines, rockets, A-29 light attack aircraft, Humvees, and copious ammunition for assault rifles and machine guns 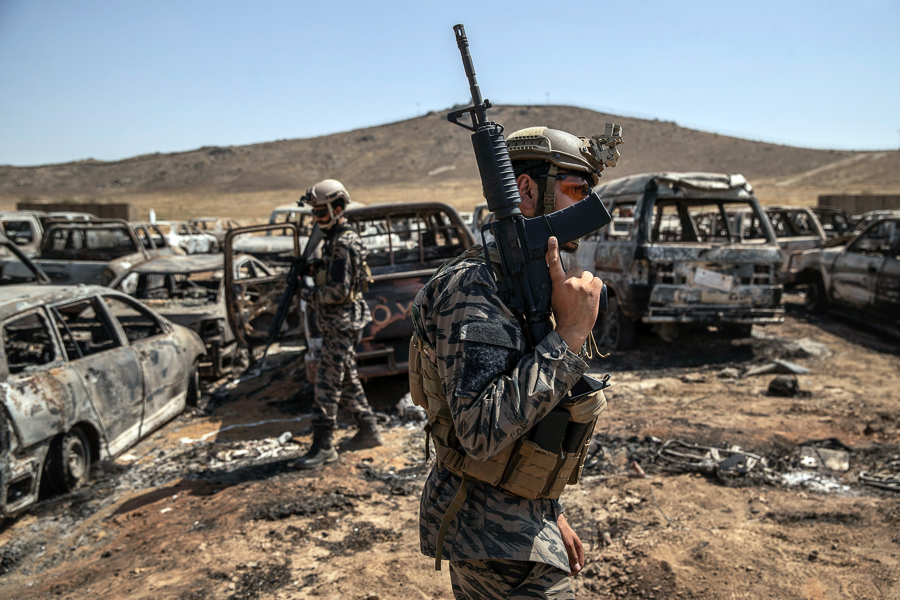 In the chaos of the American military withdrawal and the Taliban takeover this summer, thousands of American-made weapons and tons of military equipment were seized by the militants as government military bases surrendered or were overrun.With the Taliban in power, more American weapons and military accessories are now being openly sold in shops by Afghan gun dealers who paid government soldiers and Taliban fighters for guns, ammunition and other materiel, according to weapons dealers in Kandahar province in southern Afghanistan.In interviews, three weapons dealers in Kandahar said that dozens of Afghans have set up weapons shops in Afghanistan’s south, selling American-made pistols, rifles, grenades, binoculars and night-vision goggles. The equipment was originally provided to the Afghan security forces under a U.S. training and assistance program that cost American taxpayers more than $83 billion through two decades of war.During the insurgency, the Taliban eagerly sought out American-supplied weapons and gear. But now much of that weaponry is being sold to Afghan entrepreneurs because Taliban demand has eased with the end of combat, the gun merchants said. They say that many gun dealers have smuggled the weapons to Pakistan, where demand for American-made weapons is strong.The loss of tens of millions of dollars in American-made weapons and gear is yet another costly consequence of the failed, 20-year mission to Afghanistan. It ended in chaos and upheaval when the Taliban seized Kabul on Aug. 15 after crushing an Afghan military built, trained and funded by the United States.Over the years, the United States provided the Afghan military with a huge array of arms and vehicles, including M4 carbines, rockets, A-29 light attack aircraft, Humvees, and copious ammunition for assault rifles and machine guns, according to a recent report by the Special Inspector General for Afghanistan Reconstruction. For the two previous fiscal years ending in June, the amount spent on the Afghan military totaled $2.6 billion.The Pentagon on Monday acknowledged that a large number of American-supplied arms remained in Afghanistan.“Since 2005, the U.S. military has provided the Afghan national defense and security forces with many thousands of small arms, ranging from pistols to medium machine guns,” Maj. Rob Lodewick, a Defense Department spokesman, said in a statement to The New York Times.After the Afghan government’s collapse in August, Lodewick said, “we recognize that large numbers of these weapons are probably now in Taliban hands.”In congressional testimony last week, Defense Secretary Lloyd J. Austin said that more sophisticated weaponry that American troops were using in Afghanistan was removed when the last forces left in late August. Advanced weaponry provided to the Afghan security forces, such as helicopters and airplanes, was disabled before the Americans left, Pentagon officials said.But the Taliban denied that any of those weapons were hitting the market.In an interview with The Times, a Taliban spokesman, Bilal Karimi, said that weapons were not for sale. “I totally deny this; our fighters cannot be that careless,” he said. “Even a single person cannot sell a bullet in the market or smuggle it.”He added that American-made weapons previously captured during the war “are all listed, verified and are all saved and secure under the Islamic Emirate for the future army.” (The Taliban refer to their government as the Islamic Emirate of Afghanistan.)Other Taliban figures, however, have confirmed that a big wave of American weapons has hit the market.

This summer, troves of U.S.-supplied weapons were either stolen and sold by Afghan security forces, or seized by the Taliban as they negotiated wholesale surrenders in which soldiers and police handed over such weapons and equipment in exchange for Taliban promises to spare their lives. Other times, uniforms, weapons and gear were simply abandoned by Afghan soldiers and police as they deserted.Some soldiers and police sold their weapons and ammunition before they negotiated their surrenders. Weapons dealers would pay about $1,200 for a single U.S.-service Beretta M9 handgun, the gun merchants said — far more than a soldier’s monthly salary, at a time when many police and soldiers were not being paid or resupplied with ammunition, food or water.American M4 carbines sell for about $4,000, the dealers said, especially if equipped with a laser sight or under-barrel grenade launcher. In contrast, a Kalashnikov rifle sells for about $900, the dealers said, and a Russian-made rocket-propelled grenade launcher for about $1,100. Pistols that NATO forces supplied to Afghan police officers sell for about $350. Almost all their transactions are in Pakistani rupees, and in cash, the dealers said.One gun merchant, Esmatullah, said he opened a shop in Kandahar province roughly eight months ago, after the Taliban seized control of the immediate area. Before that, he said, he operated as a roving gun merchant, visiting government bases to buy weapons and ammunition from soldiers and police desperate for cash and fed up with a government in Kabul that they believed had abandoned them.“We used to work as a mobile team,” he said. “We would meet many government soldiers and officers to buy weapons from them. After that we would take those weapons to the Taliban and sell it to them, or to anyone who would give us a good price.”Separately, the Taliban permitted their fighters to sell some of the small arms they seized when bases surrendered or were overrun, the gun merchants said. The rest of the confiscated weapons were handed over to Taliban commanders, whose fighters fired American-made M4 assault carbines and rode in American Humvees when they marched across the country this summer.Today, the merchants say their customers are Afghan entrepreneurs and ordinary citizens. These Afghans are buying coveted American-made weapons either to resell in Pakistan, for self-defense or to settle long-standing personal or tribal feuds.“American-made weapons are in great demand, as they work very well and people know how to use them,” said a second gun merchant in Kandahar, who spoke on condition of anonymity because he feared the Taliban would close his shop.The merchant said he had sold dozens of American-made pistols, rifles, ammunition and two-way radios since opening his shop about three months ago.A third gun merchant in Kandahar, who asked not to be identified because the Taliban had warned him not to speak to the news media, said dealers had sold weapons as large as anti-aircraft guns to the Taliban this summer. Now, he said, he sold American-made M4s and .50-caliber machine guns, as well as weapons manufactured by other nations, including rocket launchers and Kalashnikov assault rifles.“The first choice is American-made, even though it is a little more expensive than the Russian-made,” the merchant said. “Light weapons such as guns and pistols are in great demand, as they are easy to transport and carry.”Mullah Basir Akhund, a former Taliban commander who lives in Kandahar, said he helped the militants negotiate surrenders of security forces in the province. The Taliban often sent village elders or other trusted figures to negotiate surrenders. The collapse of government bases left the area awash in American-made weapons, Akhund said.“There are many shops and weapon smugglers roaming Kandahar these days,” he said. “These people have always been there to purchase weapons, particularly during this kind of transitional period where it is easy to buy new weapons.”He said he recently introduced a Pakistani arms dealer to a gun merchant in Kandahar. He said the dealer told him he was seeking pistols, rifles, night-vision goggles, ammunition and other U.S.-provided military gear.Akhund said the Pakistani dealer sells cars from a showroom in Pakistan. But the man’s most lucrative business, he said, centers on selling American-made weapons bought in Afghanistan.

Tweets by @forbesindia
Have you checked out the fully 3D-printed and infinitely recyclable sneakers?
Knowledge, wisdom and Vedantu: How live online tutoring classes propelled the edtech company into the $1-billion club