He helped build Tesla. Now he's gunning for it.

Peter Rawlinson, who engineered the Model S, the sedan that established Tesla as a serious carmaker, now hopes to recreate the same success with his company, Lucid Motors

By Niraj Chokshi and Jack Ewing 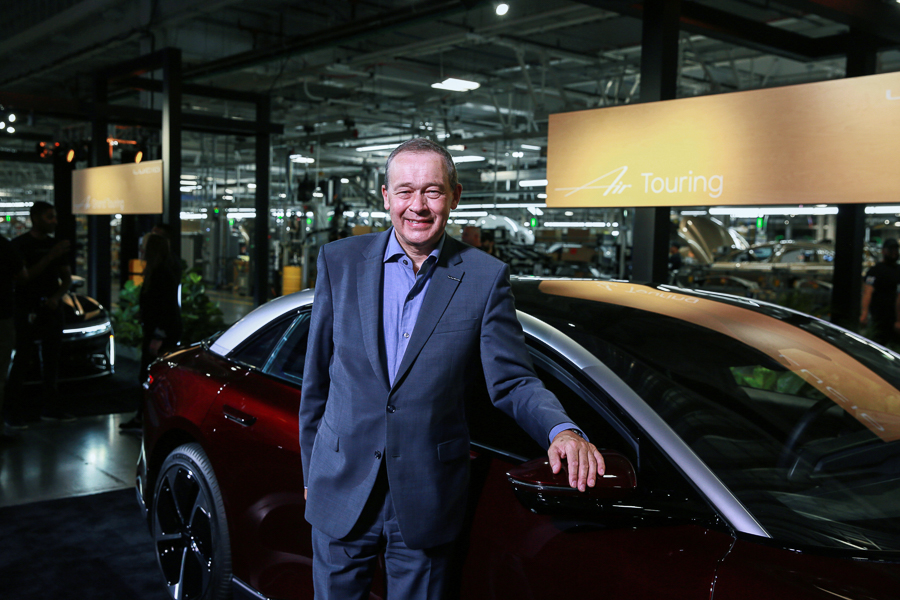 It celebrated the production of its first cars less than two months ago. Deliveries have just begun. But for a company with so few vehicles on the road, Lucid Motors is generating a lot of buzz.

Its debut sedan, the $169,000 Lucid Air Dream Edition, has been hailed for its workmanship and the ability to travel a record 520 miles on a single charge. MotorTrend magazine declared it the car of the year. And Lucid’s shares have surged in the past month, briefly vaulting the company ahead of Ford Motor Co. in market value.

The accolades are a tribute to Lucid CEO Peter Rawlinson, an auto industry veteran who engineered the Model S, the sedan that established Tesla as a serious carmaker. Now, he hopes that the Air will do the same for Lucid.

“The first product defines the brand,” he said recently at Lucid’s factory in the Arizona desert. “We’ll need to create a technological tour de force, and I think that’s what we’ve got in Lucid Air. We define our brand, we define our future.”

Along with Rivian Automotive, the neophyte manufacturer of electric trucks that is worth roughly $109 billion barely a week after listing its shares, Lucid illustrates investors’ enthusiasm for everything having to do with electric vehicles.

But the list of things that could go wrong is long — 44 pages long, in the mandatory disclosure of potential risks in Lucid’s stock offering prospectus. The document notes that the company lacks experience mass producing cars, that it has no service network and that it is highly dependent on Rawlinson, a 64-year-old Welshman who is, after all, mortal.

And there are also plenty of investors who see a tech bubble in the making and are betting it will burst. Short sellers, who use borrowed stocks to make money if a company’s share price goes down, have wagered $2.35 billion that Lucid will not be able to maintain its lofty valuation, according to data from S3 Partners, a New York firm that tracks short sales.

Lucid shares — worth about $77 billion at Thursday's close — languished for several months after the company made its stock market debut in July through a merger with a blank-check corporation known as Churchill Capital Corp IV. They began climbing in October, after Road & Track declared that the Air was “so good it should make Tesla sweat.”

Rawlinson’s credibility with investors stems largely from his résumé. He worked at Jaguar and was chief engineer of Lotus, the British sports carmaker. His name is on dozens of patents for battery technology or other innovations. Rawlinson oversaw Lucid’s development of the battery used by all the teams in the Formula E electric-vehicle racing circuit.

But mass producing automobiles is a challenge of a different magnitude. Initial versions of the Air cost almost $35,000 more than a top-of-the-line Tesla Model S Plaid. To be profitable, Lucid must appeal to more than just a superwealthy elite.

“Lucid’s biggest risks are getting to scale and capacity,” said Daniel Ives, a senior analyst at Wedbush Securities who follows the electric car industry. “The first phase has been significantly successful. Now it’s about the next level of adoption.”

Lucid plans to offer a version of the Air next year that will cost $70,000 after a federal tax credit, and produce 500,000 cars a year by 2030, with a lineup that will include an SUV and a pickup. The company had burned through $4.2 billion by June, and its prospectus noted that it might be years away from making money.

To avoid the problems that plagued Tesla in its early days, when for a while it was assembling cars in tents, Rawlinson is relying on people like Eric Bach, Lucid’s chief engineer. Bach, another Tesla alumnus, has worked at Volkswagen and takes a very German approach to manufacturing. He can expound at length on the art of achieving narrow body gaps, the spaces between sheet metal that to engineers are a measure of quality.

“We’re not intending to put any tents up,” Bach said, except perhaps “to have a party.”

At the same time, the market is increasingly crowded. Automakers like Ford, General Motors and Volkswagen have invested heavily in electric vehicles.

After it began in 2007 as a battery-maker named Atieva, the company had several near-death experiences. Atieva shifted focus toward building electric vehicles in 2014 and changed its name to Lucid two years later. It struggled to raise enough money for the capital-intensive business of building cars, but was saved in 2018 by a $1 billion investment from the Public Investment Fund of Saudi Arabia, which remains a majority shareholder.

“Everyone says, ‘Oh, the tough thing about a startup is getting an assembly line going,’” Rawlinson said. “Let me tell you what’s tough: getting finance for the startup not to go bankrupt.”

Stock bonuses tied to Lucid’s share price are likely to make Rawlinson a billionaire if he isn’t already. But Alejandro Agag, founder and chairman of Formula E, said he did not think Rawlinson was motivated by money.

“Of course, it’s nice to have money,” Agag said. “What drives him is to make the best car.”

Lucid started delivering the first of 520 Air Dream Edition cars to customers late last month, with plans to ramp up production and deliveries of three other Air models soon. The performance version of the sold-out Dream Edition boasts 1,111 horsepower, while another version focused on distance driving can travel 520 miles between charges, more than any other car tested by the Environmental Protection Agency. Lucid received that rating in September, when its vehicles seized the top six spots in the EPA’s battery-range ranking, unseating the previous record-holder: the Model S Long Range, which can go 405 miles between charges.

“Lucid’s posh quarters make a Tesla’s interior look like the mismatched Tupperware in the back of your cupboard,” the magazine wrote last month after a test drive. Ouch.

Rawlinson’s compact motors freed up interior space for passengers, and the car includes frills like an optional solid glass roof and seats that give passengers a massage. The most powerful version can outrun a Ferrari.

In Rawlinson’s telling, the luxury cars are just a steppingstone to his ultimate goal: making battery-powered mobility accessible to everyone. Lucid is open to selling its technology to companies that can produce millions of vehicles at low cost.

Tweets by @forbesindia
How Veritas Capital's Ramzi Musallam turned tragedy into the American dream
Is this the wine bottle of the future?