After the shock suicide of founder Robert McKeon, (now) billionaire Musallam convinced investors to take a bet on him, then the second-highest ranking executive in Veritas. Today, its assets have grown from a humble $2 billion to a whopping $36 billion 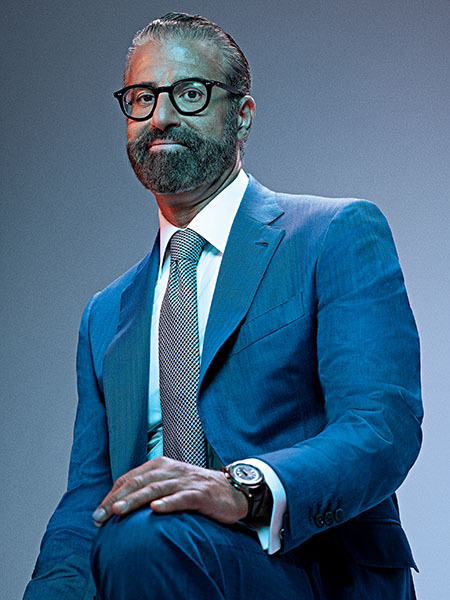 Ramzi Musallam returned to his desk after a quick trip to the bathroom on September 10, 2012, to find his assistant visibly shaken. She informed him that a call had come in about Musallam’s boss, Robert McKeon. He had just killed himself in his southern Connecticut mansion at the age of 58.
Musallam jumped in his car and raced the 40 miles from Midtown Manhattan to Darien, Connecticut. He was close to McKeon and knew his boss was struggling with his mental health. But Musallam never expected McKeon would take his own life. He was a force of nature. Through sheer will, McKeon had worked himself up from the streets of the Bronx, where his father was a Drake’s Cakes delivery man supporting seven children, to the upper echelons of finance. Musallam was in shock.
“It was just so devastating,” Musallam says. “For as long as I had known him, we had worked together. It was tough. I had never experienced anything like this.”

While McKeon’s American dream had soured into a nightmare, Musallam’s was about to soar. He returned to the office to devise a plan to stave off the collapse of Veritas Capital, the private equity firm McKeon had founded in 1992.
Musallam had come onboard in 1998 and was Veritas’ second-highest-ranking executive. The morning after the suicide, Musallam began holding emergency meetings with the company’s investors. McKeon’s death meant they suddenly had the right to tear up their commitments to fund Veritas’ deals. Instead, Musallam persuaded them to bet on him. He also cut a deal with McKeon’s family that would transfer ownership of McKeon’s majority stake in Veritas, mostly to Musallam. Years later, the hasty deal would produce bad blood—and a lawsuit—between Musallam and McKeon’s family. 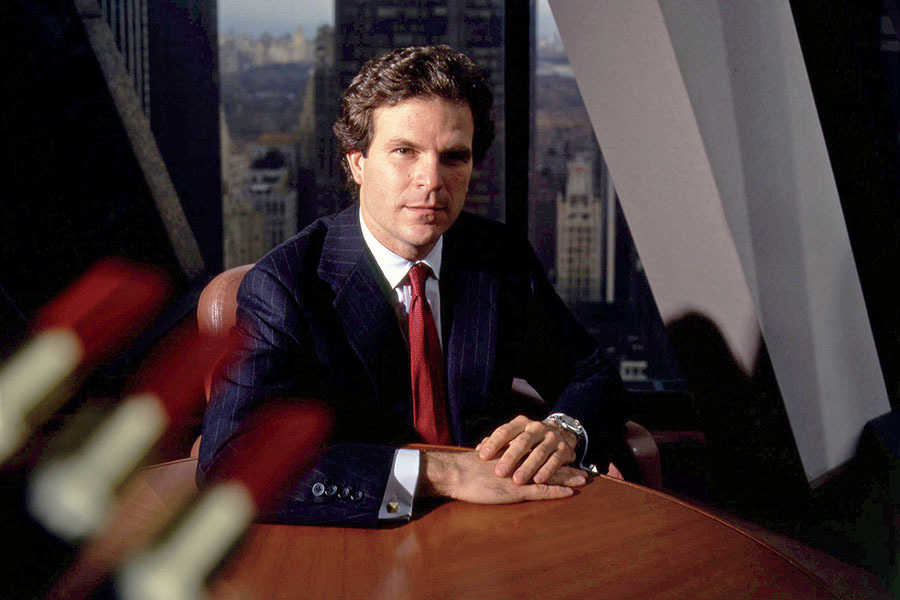 High Flier: At 38, Robert McKeon was a Wall Street wunderkind doing big deals at Wasserstein Perella, such as a reported $300 million buyout of makeup company Maybelline in 1990. He even contemplated running for governor of Connecticut. It would all come crashing down 20 years later when he took his own life at 58

But these manoeuvres laid the foundation for a stunning Wall Street success. Nearly a decade later, Veritas Capital’s assets have grown from $2 billion in 2012 to $36 billion today, and its funds have generated staggering net internal rates of return of 31 percent. The funds have lost money on only a single investment ($87 million on a solar panel company in New Mexico), and since Musallam took over, Veritas has distributed $12 billion to its investors. At 53, Musallam finds himself worth an estimated $4 billion, good enough for a debut appearance on this year’s Forbes 400.
Musallam produced this track record by focusing on technology companies that operate in sectors dominated by the United States’ federal government, particularly defense, health care and education. America’s $6.8 trillion worth of annual spending and sweeping regulatory power give it unparalleled sway in these markets. While many buyout firms try to avoid investing in areas affected by government interference, Musallam’s strategy hinges on understanding what the most influential player in the global economy will do next.

“I and the firm maintain a very close proximity to government because government is at the forefront of all the complexities and issues that confront us,” says Musallam, sitting in his Manhattan office, whose broad views of Central Park mark it as distinctly distant from Washington, DC. “These are government-influenced markets, no doubt about it, and being close to how the government thinks about those markets enables us to understand how we can best invest.”
The formula has worked. In January, Veritas was listed as the private equity industry’s fourth-best-performing firm by the closely followed HEC–Dow Jones ranking (see ‘Best in Buyouts’), ahead of high-flying firms like Thoma Bravo, Vista Equity Partners and Clayton, Dubilier & Rice.
Despite his ease navigating Washington and Wall Street, Musallam shuns publicity. He rarely speaks to the press. He is one of a handful of financiers with top government security clearance.
“There are people in the private equity world who have a lot of visibility. That is not Ramzi. He is understated but extremely effective,” says David Solomon, CEO of Goldman Sachs. “He has quietly built an extremely valuable business being at the intersection of government-regulated markets and technology, which is rare for private equity.”
A Palestinian Christian born in Jerusalem, Ramzi’s father, Samih Musallam, landed in New York City in late 1950, shortly after the first Arab-Israeli war in 1948. His first night at the YMCA, all his belongings were stolen. He persevered, eventually earning a civil engineering degree from the University of Missouri before settling—and prospering—in Effingham, Illinois. By the mid-1960s, the now successful Samih returned to the Middle East; his second son, Ramzi, was born in 1968 in Amman, Jordan.
Samih Musallam worked for the US Army Corps of Engineers, moving his family constantly. Ramzi’s formative years were spent in emerging markets such as Saudi Arabia and Tanzania. “We were literally in the middle of nowhere—there was nothing there, no village, nothing,” recalls Musallam of his years in Africa. “We were homeschooled and learned through correspondence. There was no iPad. We would do an assignment and my mom would mail it in.”
Musallam says the experience was an immersion course in navigating relationships with people from different cultural backgrounds, one that taught him sensitivity and resilience. His family was once held at gunpoint in Tanzania and shaken down by bandits on a dirt road. “I thought it was normal,” he says.
By the time Musallam was in high school, his family returned to the US and landed in Pine Brook, New Jersey. He studied economics at Colgate University and started on Wall Street as a JPMorgan investment banker in 1990 before jumping two years later into private equity at a boutique firm, Berkshire Partners. He then headed to the University of Chicago for business school, where he talked himself into a job with the investment operation of Jay Pritzker, the billionaire who built the Hyatt Hotels chain. When he graduated in 1998, Musallam headed to New York, where he was hired by Robert McKeon.
Six years earlier, McKeon had founded Veritas Capital after leaving Wasserstein Perella & Co, the pioneering investment bank co-founded by Bruce Wasserstein and immortalised in a 1989 Forbes story, ‘Bid ’em Up Bruce’, which described how the firm’s clients were often coaxed into overpaying for targets. McKeon had run Wasserstein Perella’s successful private equity arm and had grown tired of funneling most of his unit’s profits to Bruce Wasserstein.
At Veritas, McKeon owned a majority of the company and raised money on a deal- by-deal basis from a network of CEOs, including Chevron’s George Keller and Ford’s Harold “Red” Poling. His only partner was Thomas Campbell, a fellow banker who had left Wasserstein Perella with him to start Veritas and who McKeon would shove out the door in 2007.
Musallam pushed McKeon in two new directions. First, he helped convince McKeon to move beyond his deal-by-deal approach and raise private equity funds from institutional investors that would lock up cash for years. That gave them flexibility and helped the business grow. Second, Musallam figured out that defense contractors would be fertile buyout targets for funds willing to deal with theidiosyncrasies of government contracting. Starting with the purchase of PEI Electronics, a Huntsville, Alabama-based military equipment maker, Veritas cobbled together what would become Integrated Defense Technologies, which it listed on
the New York Stock Exchange in 2002. Defense deals would become Veritas’ bread and butter. When one looked particularly promising, McKeon would take a cue from Bruce Wasserstein and grab more of the riches for himself. He personally made $350 million just from DynCorp, a military contractor that was sold in 2010.

Unfortunately, the Dyal deal upset Robert McKeon’s heirs. This February, the family sued Musallam for breach of contract, claiming the $200 million loan was designed to cheat them out of their right to 10 percent of the proceeds of any sale of the firm, some $20 million. In court, Musallam claimed he stayed true to the contract. “A loan is not a sale,” he stated. In September, the New York State Supreme Court agreed with Musallam and tossed out the case.
While dealing with McKeon’s family, Musallam worked from a desk near a large picture of his father, Samih, who died a decade ago. It’s a reminder that the American dream is alive and well—but also that great happiness requires more than just great wealth.
“He did what you hear and read about—he took the boat to New York,” Musallam says. “He’s overlooking and watching me.”

(This story appears in the 19 November, 2021 issue of Forbes India. You can buy our tablet version from Magzter.com. To visit our Archives, click here.)

Tweets by @forbesindia
Photo Of The Day: Hope, faith, and victory
He helped build Tesla. Now he's gunning for it.