Jeetender Sharma travelled across India to understand customer niggles with EVs before setting shop in 2015. Now his company, Okinawa scooters is the second biggest EV scooter maker by volume 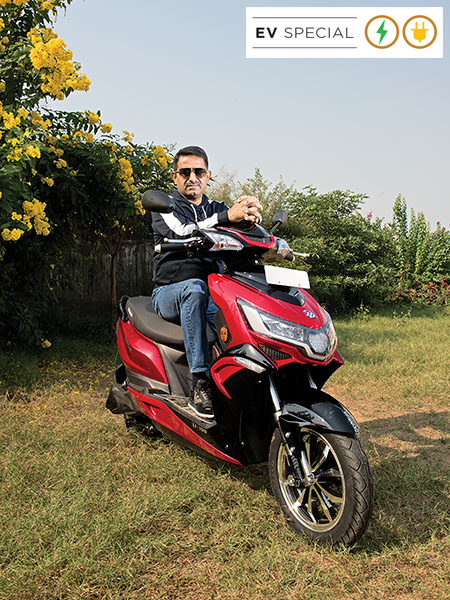 Jeetender Sharma, founder and MD of Okinawa EVs, in Gurugram

The electric journey of Jeetender Sharma started in 2015. “Cycle waala bhi mere se aagey nikal jaata hai [Even a cyclist ovetakes me],” was what a teenager in Gurugram, Haryana, replied when asked about his experience with an electric scooter. Sharma, then 39, felt awkward to see a wide grin on the boys who were narrating their tale. While crossing a flyover, the second one chipped in, the pillion rider has to walk. “EVs [electric vehicles] are toys,” he said in a dismissive tone.

Sharma was distraught. And rightly so. As head of supplier and quality assurance with Honda Motorcycle & Scooter India (HMSI) for close to 14 years, his Catch-22 situation was understandable. He was one of the top guys behind the success of India’s biggest scooter brand—Honda Activa—which had an impeccable record in mileage, performance and speed. The former Honda employee, now toying with the idea of making e-scooters, decided to travel extensively across cities and smaller towns to gather consumer insight about EVs.

Irrespective of the geography he visited, the feedback, unfortunately, was depressing. “At best, EVs were looked upon as a costly substitute for cycles, and not scooters,” recounts Sharma, who had jotted down a list of issues plaguing EVs: Low speed, poor mileage, zero infrastructure, lack of spare parts, unskilled mechanics, frequent breakdowns, poor quality. What bothered Sharma most was an unfair comparison. “Every aspect of EV was sharply contrasted with petrol scooters,” he rues. Consumers were in no mood to come out of the internal combustion engine (ICE) age.

Sharma, though, stayed adamant. He started bootstrapped, managed to build a kitty of ₹25 crore from friends, family and personal savings, and started his electric two-wheeler brand Okinawa. His wife, a doctor, was convinced with her husband’s vision in an electric future. She quit her profession and joined the venture. The enthusiasm of the husband-wife duo, however, was not shared by many. Friends, relatives and acquaintances laughed at their bravado. “Consider yourself lucky if you manage to sell even 500,” was the jibe from one of Sharma’s former colleagues.

The first-time entrepreneur’s optimism probably stemmed from his achievement at Honda. Back in 2001, when he joined HMSI, the Japanese major rolled out Honda Activa. The gearless scooter then was an aberration in the two-wheeler market. The belief and persistence paid off when Indian homes started buying gearless scooters as the second vehicle after a bike. In fact, in most of the families with cars, a gearless scooter emerged as the only two-wheeler.

In 2016, after two years of research, Sharma made a prototype of an electric scooter and rode it for 25,000 km across the country. The idea was to iron out all the glitches—whatever the scooter would encounter over the long run—and incorporate the changes in the final product. A year later, Sharma rolled out his maiden scooter Ridge, and managed to sell 10,000 units in a year. With galloping sales, business pole-vaulted. In 2018, Okinawa posted ₹100 crore in revenue; and the next year, the brand crossed the 50,000 sales mark.

Cut to October 2021. Okinawa closed FY21 at ₹155 crore revenue, has sold over 1 lakh scooters so far, and emerged as the second-biggest electric scooter maker in India with a 17 percent market share. While Hero Electric tops the chart with 36 percent share, the third on the pecking order is Ampere with 14 percent, followed by Ather with 11 percent, according to data by JMK Research, a consultancy firm. Okinawa has a manufacturing plant in Alwar, Rajasthan, with an annual capacity of 90,000 vehicles in a single shift; has three e-scooters under high-speed, and two under the low-speed category, with prices ranging from ₹61,998 to ₹1.05 lakh. The company is now planning to invest ₹200 crore to set up a new plant which can make up to 1 million units. The ambitious target is to sell over a million units by 2025. 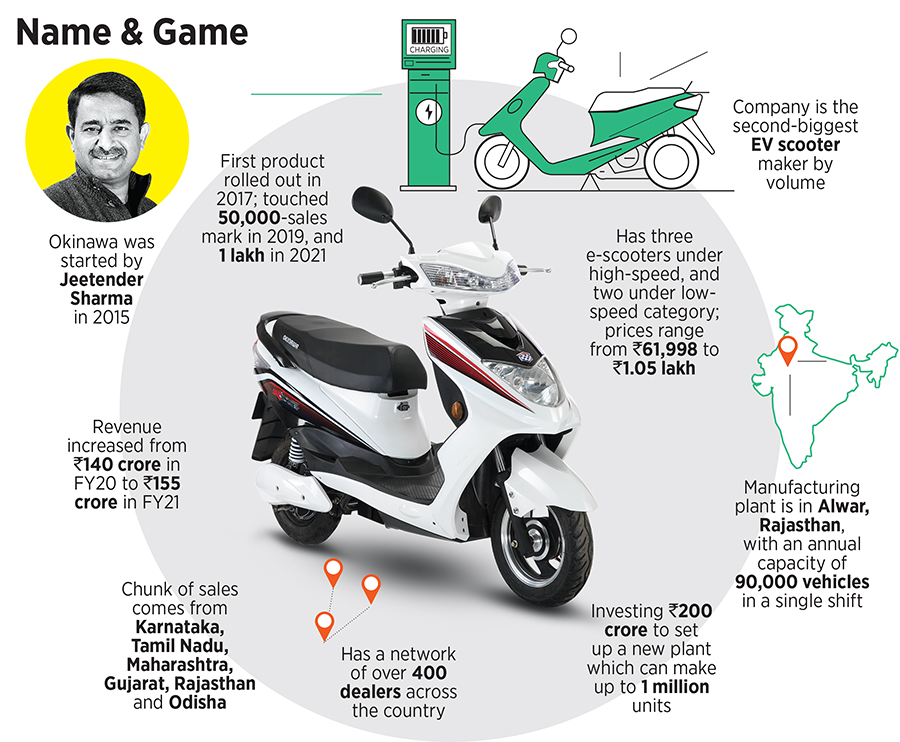 Sharma, for his part, reckons that what is most gratifying for him is not the second-biggest billing. “What is priceless is the consumer trust,” he says. For a brand, he explains, which didn’t have any legacy or any financial institution backing, managing to change the perception of EVs and silently nudge people toward a greener future is a huge sense of satisfaction. “The future is EV, and it is here,” he says.

Okinawa’s success, reckon auto analysts, can be largely attributed to two factors. First, it had a portfolio of low-speed and high-speed scooters, and managed to strike a balance between price and value proposition. It started as a mass brand by rolling out EVs for over ₹60,000 and is now playing a premium game with the launch of iPraise+, which is priced at ₹1.5 lakh and claims to run 139 km on a single charge.

It was the second factor, however, that turned out to be magical. Explains Jaspreet Singh Bajwa, management consultant (automotive industrial consulting group) at Nomura Research Institute: Sharma was quick to kill ‘range anxiety’ among consumers. Range, he says, was not only about the mileage but also about the speed of charging the batteries.

“The comfort of detachable lithium ion batteries soothed all nerves,” he says. Users can remove the battery and charge it at home with a common three-pin plug. In one go, Sharma killed all apprehensions around charging infrastructure. Bajwa adds that it also removes the fear of overheating or other issues if the battery is left overnight to charge in the scooter.

What also gave Sharma massive headroom for growth was targeting smaller towns across India. Okinawa has a network of over 400 dealers, and sells mostly in Karnataka, Tamil Nadu, Maharashtra, Gujarat, Rajasthan and Odisha. Staying away from the cluttered top cities helped immensely. 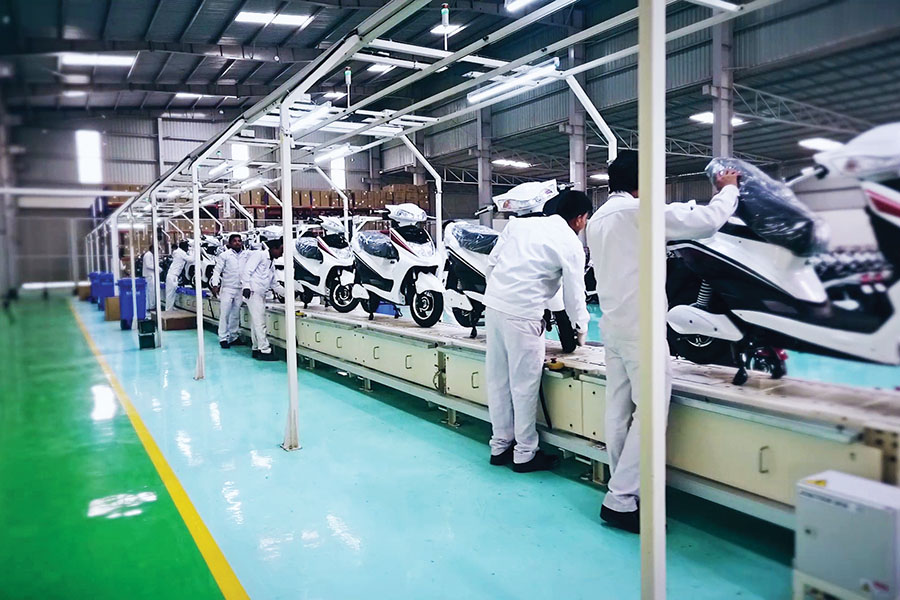 The Okinawa factory in Alwar, Rajasthan

Marketing experts, though, point out the missing fourth ‘P’—price, product and place being the first three. Call it promotion or positioning. “Having a Japanese name was a marketing masterstroke,” says Ashita Aggarwal, marketing professor at Bhavan’s SP Jain Institute of Management and Research in Mumbai. Japan’s Okinawa—nicknamed ‘Island of Longevity’—is not only known for residents having a long life, but it is also known for the high level of environment consciousness among people.

Japan also, she underlines, is one of the most assuring names in auto technology. For a user who is getting into a new technology for the first time in her life, a Japanese name is highly comforting. “They have lived up to the billing as well,” she says, alluding to the quality of vehicles.

Sharma, though, didn’t put on a marketing hat while naming his brand. During his stint at Honda, he visited the island thrice and was impressed with the quality of life and awareness about a clean and green environment. “That’s why I named it Okinawa,” he says. Consumers, he underlines, don’t stick to a brand if it doesn’t deliver quality. “We are a 100 percent Indian company. We never positioned it as a Japanese brand,” he says, adding that the journey has had its share of impediments.

One of the early challenges was convincing banks. “It was not easy,” Sharma recounts. Some of the financial institutions he approached had a bitter experience in backing electric two-wheeler ventures. When no amount of convincing helped, Sharma thought out-of-the-box to change the conventional wiring of the lenders. At one of the zonal offices of a bank, he kept his scooter parked for 45 days. He offered the employees to use it for free. The idea was to make them realise the high quality of the product, and viability of the business. The gambit worked.

Another problem, which still persists, was low awareness about EVs. He rolled out campaigns educating people not only bout the technology and the product, but also about the right way to use the batteries.

Recently, there have been news of EVs catching fire. Sharma reckons there is no reason to panic. “Mishaps can happen if people don’t follow the right procedures,” he says. EVs, he underlines, are not only about a new product, but also about a change in mindset.

“Jolts, if any, must not halt the progress towards a clean and green tomorrow,” he signs off.