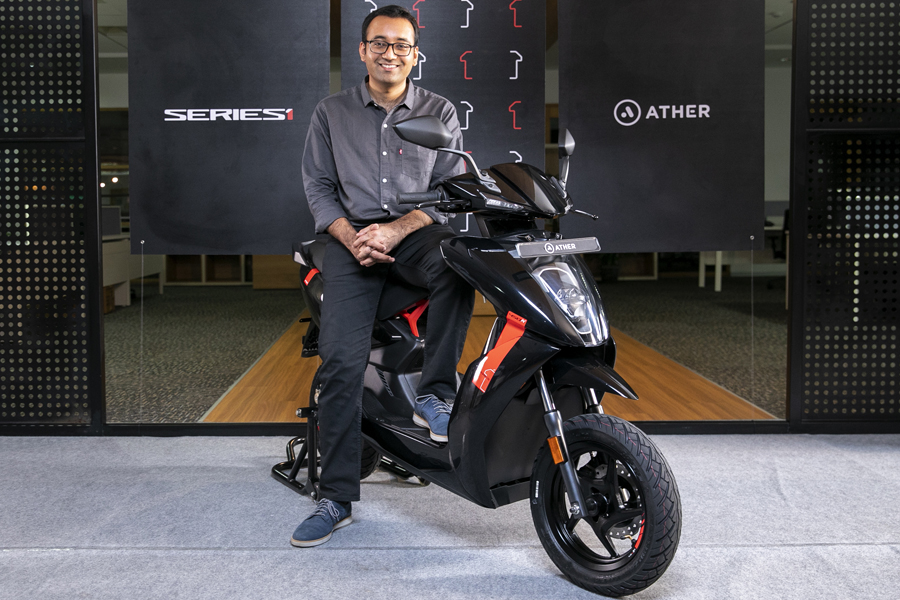 The IIT Madras graduate found the proposal shocking. “It was a terrible idea,” recalls Tarun Mehta, who cofounded Ather Energy with Swapnil Jain from the incubation cell of the premier engineering institute in 2013. Quite early during their entrepreneurial journey, the duo had pitched the product stereotype—a smart, intelligent electric two-wheeler—to an investor. The funder saw the spark in the business blueprint and displayed intent to back the electric venture.

There was one catch, though. The investor proposed a ‘minor’ tweak. “Why don't you buy a Honda Activa and change it to an electric scooter?” The cofounders were aghast: “What? Like really? Are you serious?” Mehta exclaimed. The funder went ahead to decode the nuts and bolts of his plan: Replace the engine, put a motor, change the fuel tank, insert a battery, and you will get an electric scooter. “Isn’t that simple?” he smiled.

Mehta couldn’t resist the urge to interject. “Listen, that's not how things work. Nobody will buy this,” he reasoned. An electric vehicle, he stressed, has to be built from scratch. The investor, though, didn’t budge. Convinced and now obsessed with his idea, he tried to sweeten the deal. “I will give you money to buy 500 used Activas. Just try doing it,” he pleaded.

That’s when Mehta decided to end the conversation. “It’s a terrible, terrible idea to retrofit old scooters to build an aspirational EV,” was his parting shot.

The struggle to find investors for a smart electric product continued. Suggestions kept creeping in: don’t make a product, don’t build technology, there is no market for such a product in India. Then there were many who kept asking the most popular automobile question in India: kitna deti hai? (how much—mileage—does it give?) The frequency of the question made it appear as if the nation only wanted to know kitna deti hai.

Fast forward to August 2021. Petrol is hovering at over Rs 100 a litre, and there are no signs of the good old days of low fuel prices. The transition to Bharat Stage VI emission norms have pushed up the price of two-wheelers, and the government’s relentless push towards EV have pulled down its high prices.

Mehta now wants nation to know something. “Kitna deti hai now works in favour of EVs,” he smiles, explaining his point. While a two-wheeler user will spend Rs 3,000 a month on petrol, running an electric vehicle will cost around Rs 350. “You're saving so much money riding electric that kitna deti hai is a question loaded in favour of electric,” Mehta underlines.

The Ather 450X and the story so far…
Meanwhile, in January last year, Ather Energy rolled out the 450X. The electric scooter comes loaded with features which add heft to its claim of being the quickest and the smartest. Look at the specs: 0 to 40 km/hr in 3.3 seconds; a 7-inch touchscreen dashboard with Google Maps navigation; bluetooth and 4G connectivity; 116 km on a single charge and fast charging which gives you a 15 km range in 10 minutes.

The startup has raised over $100 million so far and counts Tiger Global, Hero Motocorp, and Flipkart cofounder Sachin Bansal among its backers. Clearly, walking away from the retrofitted Honda Activa idea worked out well for Mehta and Ather.

In just under four years since it launched its first product in Bengaluru in 2018, Ather has been growing at a faster clip.

In FY21, it sold over 4,400 EVs, a sharp increase from the numbers clocked by it in the previous fiscal: 2,900 units. In July this year, it posted its highest monthly numbers at 1,799 units, according to data provided by JMK Research. In terms of volume of high-speed EVs sold, Ather was third in the pecking order, behind Okinawa and leader Hero Electric. In terms of retail footprint, it plans to expand from 27 cities to 40 by the end of the year.

Doing EVs right
Mehta, though, doesn’t want to make noise about the early achievements, just like the noiseless electric scooters he makes. For an entrepreneur who silently spent the first five years building the infrastructure, developing an ecosystem, and convincing consumers and investors about the need to go electric, it has been a long and hard grind.

Understanding that infrastructure is critical for EVs, Mehta started putting up charging stations before even selling vehicles. “We put up fast charges before we started sales,” he says. Today we have about 150 fast chargers across the country, and we are adding a fast charger almost every day, he claims.

“If you want to build electric vehicles for the long term, there are a lot of things you have put together first,” he underlines. To build a product, one needs technology, loads of engineering, and capital. It takes a few years of hard work, Mehta lets on, to put together a product with reliable technology and a supply chain that can stabilise manufacturing. “You can't have manufacturing up and running in two months. If you do, the quality will be questionable,” he stresses.

The wisdom comes from past experience. Five years ago, Mehta and his gang saw the damage caused by poor-quality EVs. “There was a point when buying electric was basically buying a toy,” he recalls. The vehicles had a speed of 20-25 km/hr; the battery charge didn’t last long, neither did the charger; the motors didn’t function properly, and all it took was one rainfall to take the spark away from the electric. “You couldn’t even fix a flat tyre. It used to be a nightmare,” he says. Things, though, have changed drastically. “Today customers expect electric to be an upgrade,” he says.

Ather, reckon auto analysts, has displayed ample smartness in its approach towards the electric vehicle market. First, it didn’t rush in with the product. “It didn’t whip up any frenzy, it took time to set up the infrastructure and invested in the technology,” says Amit Kaushik, managing director at Urban Science, a Detroit-based global consulting firm. Second, it entered into the premium segment of the market, which is yet to get disrupted in India. When a user, explains Kaushik, experiences a high-end electric scooter, the satisfaction level with the quality is quite high. It also results in favourable word of mouth.

What also helped Ather was the fact that it played a sedate game. Creating aspirational value around a premium product and aggressively building the infrastructure added to their long-term vision of an electric future, says Jaspreet Singh Bajwa, management consultant, Nomura Research Institute. “Back in 2013, the time was not perfect to make noise around EVs,” he says. Though Ather has done a good job so far, the challenge for the brand is that it is still niche because of its hefty price tag. “They need to roll out an affordable scooter,” Bajwa underlines, pointing out three factors that still keeps consumer away from EVs: range apprehension, charging issues and exorbitant price.

Mehta, for his part, contends that his company did work on a differentiated strategy to tackle all concerns.

Underlining that EV will take more investments over the next few years, Mehta points out that the company will keep raising funds. “We do think EBITDA (earnings before interest, taxes, depreciation, and amortization) profitability is in the two-three year horizon,” he says.

Mehta, interestingly, doesn’t even want to usher in an electric revolution. “We will not be too worried about changing everything in six months,” he says. But what about the issue of lowering import duties on EVs? Mehta speaks his mind: “I think it's a fairly pointless debate.” Reason: anybody who is credibly building electric in India—and those who want to credibly sell electric in India—is already building EVs in the country. While there are a few car manufacturers who may want to import, that's not the real electric story. “The real electric story is in two-wheelers. The entire duty story is a distraction,” he says.

What, though, is definitely on the horizon is more hustle and a deeper electric play.